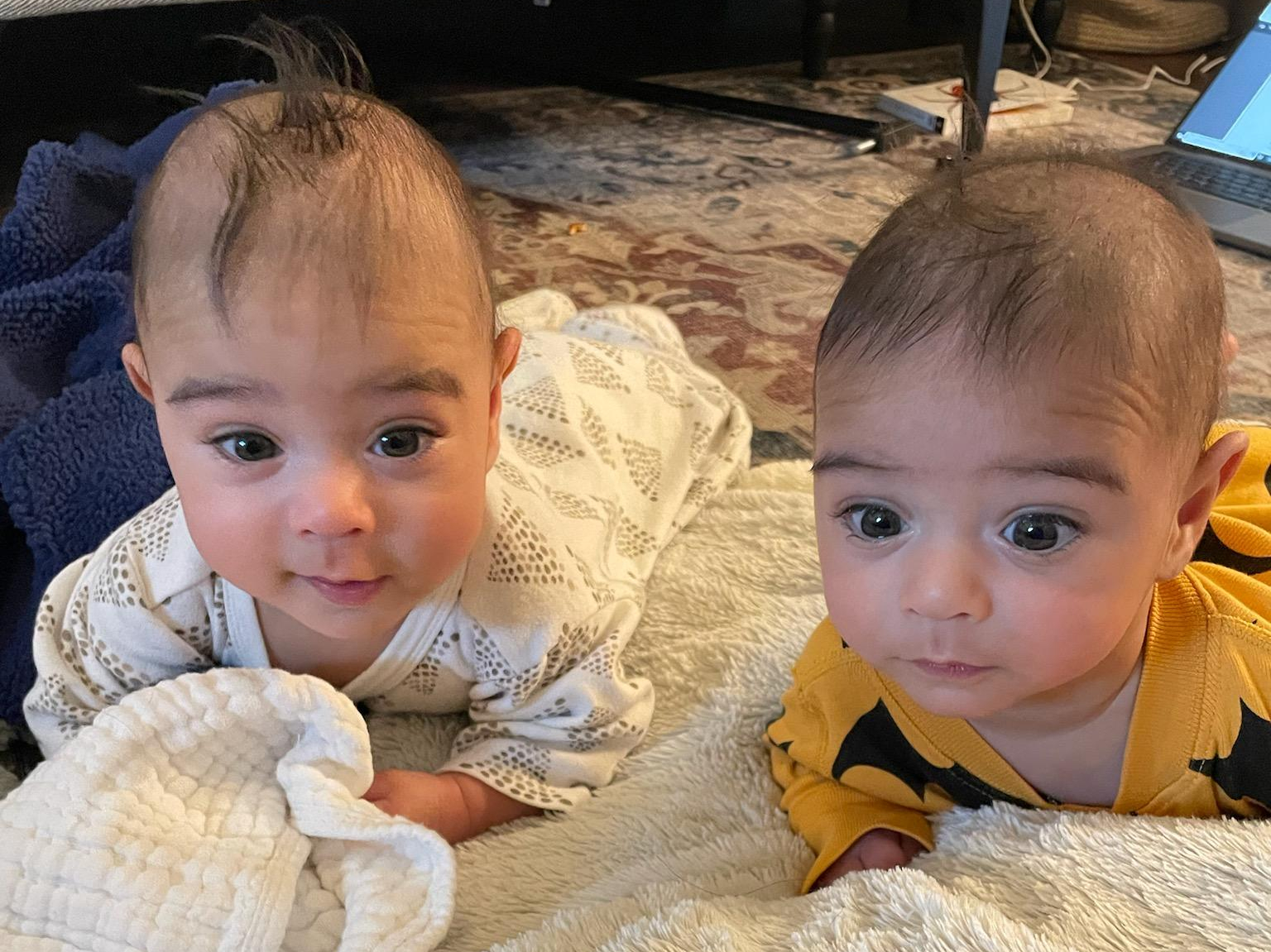 One week after welcoming their twins to the world, Sean LaPorta and Tejal Patel tested positive for COVID-19. The couple says their Brigham NICU team went to extraordinary lengths to help them bond with their boys, Rahm and Yogi LaPorta, pictured above at home in November, while they isolated at home.

Sean LaPorta and Tejal Patel couldn’t believe what they were hearing during what was supposed to be a routine prenatal visit: Their twins needed to be delivered — and soon.

Their boys were being monitored for a rare condition called twin anemia polycythemia syndrome, also known by the acronym TAPS. It occurs when blood flows unequally in the womb between twins, causing one baby to receive too much and one to receive too little. After scans that day in May revealed some concerning developments, doctors recommended Patel undergo a cesarean section as soon as possible to ensure the twins’ safe arrival.

Later that day, Rahm and Yogi were born — each weighing about 3 pounds. Given their fragile state, they were quickly transported to the Brigham’s Neonatal Intensive Care Unit (NICU) to receive lifesaving care.

But just when LaPorta and Patel were starting to get their bearings, life threw them another curveball: One week after welcoming their babies to the world, the couple tested positive for COVID-19.

In the face of such an uncertain time for their family, the couple said their NICU team cared for their whole family with such extraordinary dedication and compassion — especially while LaPorta and Patel isolated at home, away from their boys, for two heart-wrenching weeks.

As Thanksgiving nears, the family says words cannot express the depth of gratitude they feel toward the Brigham staff who supported them during that time and through the rest of the boys’ stay in the NICU.

“I don’t usually get emotional, but when I talk about how much the team means to me, I get choked up,” LaPorta said. “It’s amazing anyone can have that much empathy. It’s not just that they take pride in their jobs, but they also have an ability to connect with people and understand exactly what they need.”

While LaPorta and Patel remained at home, NICU staff ensured the family could bond by setting up regular FaceTime sessions with the twins so their parents could read books and sing to them over a video call.

Although Rahm and Yogi avoided catching COVID-19, their possible exposure to their parents’ infection meant NICU staff needed to take additional precautions while caring for them. That included putting on and removing a full array of personal protective equipment each time they entered and exited the boys’ room during the isolation period.

“That extra mile was an extra marathon,” LaPorta said. “They would have to gown up and find coverage for their other patients every time they helped us set up a FaceTime call, then listened to us read a thousand books and moved the devices around so we could see both of our kids.” 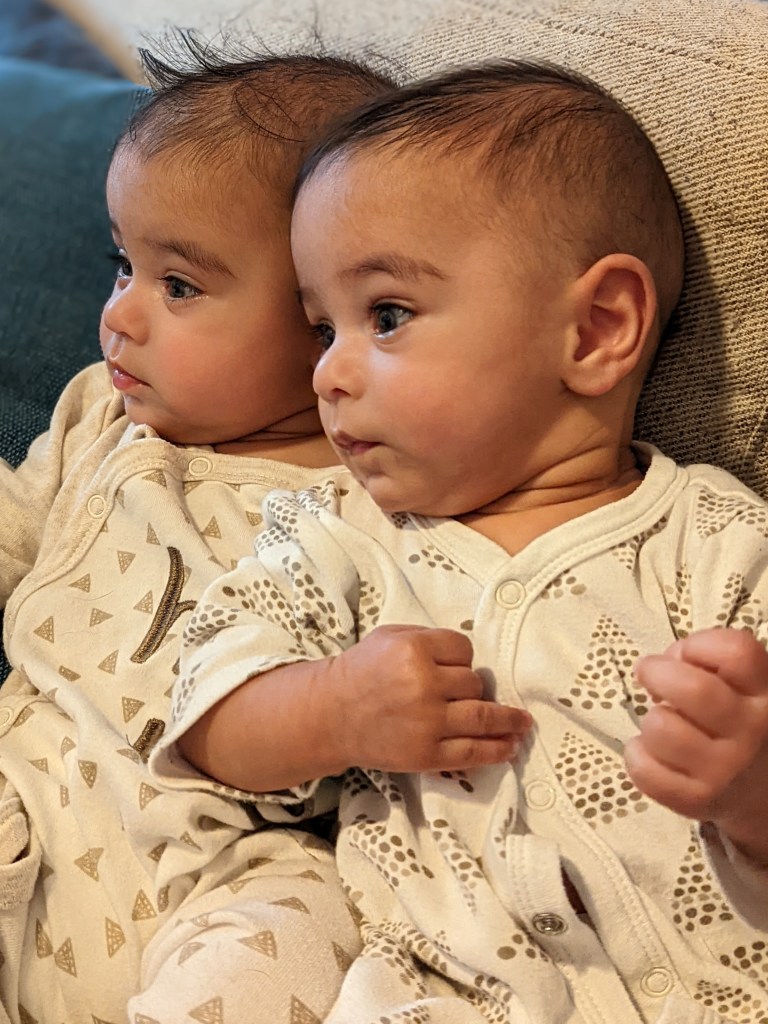 “When I talk about how much the team means to me, I get choked up,” LaPorta says of the NICU staff who cared for their family.

Yelena Platsman, BSN, RN, one of the boys’ primary nurses in the NICU, said she never once considered those moments a burden. Just on the contrary, she added. She delighted in quietly listening to LaPorta and Patel lovingly read, and reread, stories such as Chicka Chicka Boom Boom and Steam Train, Dream Train to the babies.

“I imagined myself in their shoes and how difficult it must be to not only have my children in the NICU, but to also be separated from them,” she said. “I knew how much those FaceTime visits meant to Tejal and Sean. It was their only way of connecting with their boys.”

Family-centered care is an essential component to helping infants recover, grow and develop during their time in the NICU and beyond, Platsman added.

“The health of babies doesn’t just depend on the medical care they receive in the NICU. Their long-term health is dependent on the bond they form with their parents,” she explained. “Having parents involved as much as possible in taking care of their children promotes bonding, as well as parental confidence.”

Now 6 months old, the twins are thriving at home. Rahm, the more active of the two, seems to be close to crawling — an exciting milestone for any baby and even more thrilling for his parents after seeing him overcome the challenges of a premature birth. Yogi, who had been using a feeding tube to help meet his nutritional needs, is starting to explore the delights of solid foods and learning how to eat on his own.

“I’m most grateful right now for my kids,” LaPorta said. “It’s amazing to see them move forward and know that they’re happy and healthy.”

The couple says they couldn’t imagine where they would be without the support of their Brigham NICU team, said LaPorta, who is a twin and NICU graduate himself.