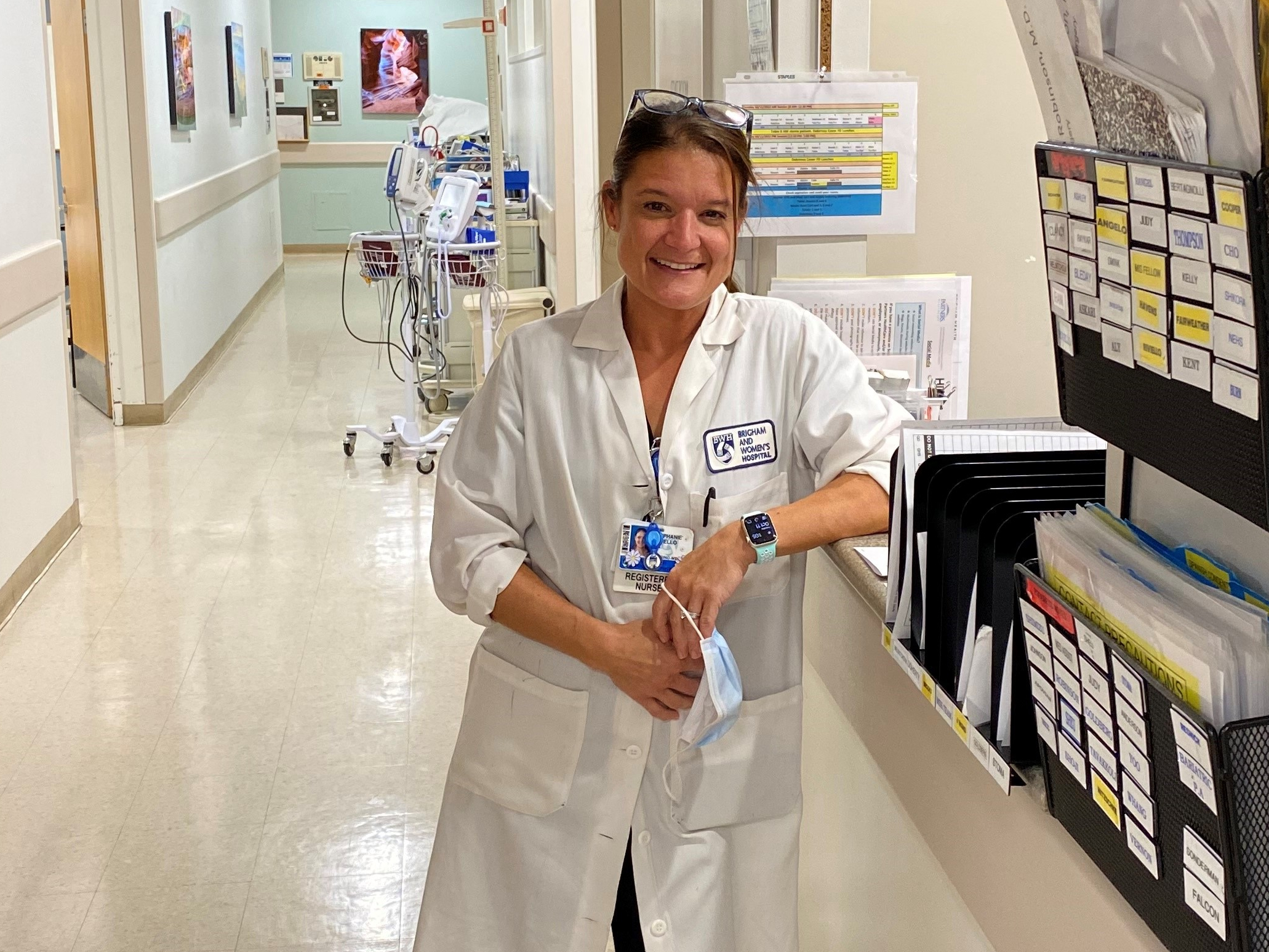 After sharing an elevator with thoracic surgeons discussing a new, experimental surgery that could treat her autoimmune disorder, Brigham nurse Stephanie Capello decided to inquire about becoming a candidate for the procedure.

After living with a chronic autoimmune disease for the past four years, Stephanie Capello, BSN, RN, CWOCN, a Wound and Ostomy nurse at the Brigham, was eager for relief.

She had developed myasthenia gravis (MG), a neuromuscular disorder that causes the immune system to mistakenly attack the skeletal muscles — leading to muscle weakness that affected her ability to breathe, talk, swallow, chew and more.

Capello recalled her alarm and confusion when her symptoms first emerged in 2018. “I was working Labor Day weekend, and I thought I was having a stroke because I couldn’t talk,” she said. “I couldn’t get my words out.”

She began taking immunosuppressive medicine for her condition and receiving monthly IV immunoglobulin infusions, which provide antibodies for those with antibody deficiencies. While the therapies partially alleviated her symptoms, they also had side effects.

There was another option: surgery to remove her thymus, a gland located under the breastbone and in front of the heart. Her neurologist, Christopher T. Doughty, MD, explained that undergoing a thymectomy would very likely reduce her need for medications. It might even put her disease into remission.

Still, it was major surgery, and Capello was concerned about the risks and recovery. She didn’t feel ready to consider surgery until one day at work when she was standing in a packed elevator, where she overheard Raphael Bueno, MD, chief of the Division of Thoracic and Cardiac Surgery at the Brigham, talking with a colleague about a new, less-invasive approach to performing this procedure.

This new approach, a single-port thymectomy, uses an experimental robot to remove the thymus through only one incision — hence the name “single port.”

“Listening to Dr. Bueno’s excitement and the way he was talking about how it would greatly benefit patients by being less painful, having a faster recovery and shorter stay in the hospital, I began to reconsider and realize it might not be as bad as I thought,” reflected Capello.

The new procedure stands in stark contrast to the traditional way of performing a thymectomy, which has long been an open-heart procedure. Even more modern robotic methods still require four incisions for four different ports to be inserted into the thoracic cavity.

That fateful elevator ride led Capello to recently become the first patient in the U.S. to undergo a single-port thymectomy, an experimental procedure performed by a multidisciplinary team led by Brigham thoracic surgeons Margaret Blair Marshall, MD, and Paula Antonia Ugalde Figueroa, MD. The Brigham is one of six sites in the U.S. enrolling patients in a clinical trial to evaluate the safety and efficacy of this procedure.

On the Cutting Edge

“If I rest, I can get my words out much better,” she explained. “It’s so bizarre because I used to be a marathon runner, and I played college sports. Now, I can just run short distances because I get fatigued with shortness of breath.”

After becoming the unintended audience for a literal elevator pitch, Capello decided to ask Bueno about the single-port procedure. “We were the last three on the elevator, and as he was walking out, I decided to ask him about it,” she recalled. Bueno then immediately arranged a consultation for her with Marshall.

“Dr. Marshall is so professional, enthusiastic and passionate about what she does,” Capello said. “I think her innovation is really impressive, and I felt very comfortable with her.”

Marshall, an expert in robotic surgery, worked together with Ugalde, an expert in single-port operations, along with a multidisciplinary surgical team to perform Capello’s surgery in June. “I am so impressed with Stephanie’s bravery to be the first patient in the United States to undergo this procedure, especially because she knew she needed it but was avoiding it for a long time,” said Marshall. “She is the true pioneer here.”

If the clinical trial proves the procedure’s success, the surgical team hopes to eventually offer it in an outpatient setting, as well as extend this same approach to other surgeries, including lobectomies, which remove a lobe of the lungs.

Following her surgery, Capello was discharged from the hospital in just two days. After two weeks of rest, she was well enough to enjoy a family vacation on Martha’s Vineyard, where she continued to recover from the surgery. “I was amazed at how good I felt and how soon I felt good.”

After she returned to work, Capello saw Bueno in the hallway and let him know how well her surgery and recovery went. Bueno shared that she was the first person in the U.S. to undergo the procedure, which Capello hadn’t fully realized before.

Bueno commented, “The surgery should put her disease into complete remission. Right now, she’s on high-dose steroids with plasmapheresis, so this should be a dramatic improvement in her quality of life.”

It often takes one to three years before patients with myasthenia gravis begin seeing results from thymectomies. As it has only been a few months since her surgery, Capello hasn’t noticed any immediate MG-related improvements from the surgery just yet, but she is excited for her future.

“I always knew Brigham and Women’s was amazing because I’ve worked here my whole career, and I will forever speak highly of this hospital,” Capello said. “It’s also saved my mother’s life in the past, and I’m so grateful I can also say how amazing this hospital is from my own personal experience as a patient.”