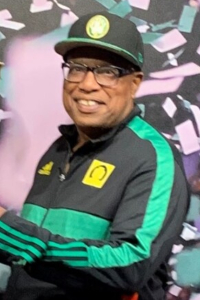 Brigham and Women’s Hospital mourns the loss of Edwin “Pete” Phoenix Jr., a lead aid on the Waste Management team in Environmental Services, who died Oct. 13 following a sudden illness. He was 66.

A member of the Brigham community for 44 years, Mr. Phoenix worked the day shift and was responsible for waste removal throughout the Brigham’s main campus.

Mr. Phoenix’s memorable smile and warmth brought joy to his colleagues, and several reflected on another one of his unforgettable characteristics: His cheerful whistling throughout the halls of the hospital, which was instantly recognizable.

“Pete always brightened my day with his smile, his jokes and his famous whistling,” said Adam Kayi, a manager in Environmental Services who worked with Mr. Phoenix for 22 years. “He was larger than life, and no challenge was too big for him. He always brought joy and positive energy to work. I miss him a lot.”

“Besides being a great team member, Pete was a wonderful person. Pete always came to work with a positive attitude and a smile on his face,” Shrestha said. “Nothing was ever an impossible task for Pete. He always performed his task to the fullest and kept the area safe for everybody. He loved to whistle when he walked the long hallways and gave that positive vibe to the people around him. We miss him dearly.”

In addition to being the center of so many friendships, the Brigham also became the place where Mr. Phoenix met his wife, Denise, while working a weekend shift three decades ago. They married in 1988.

Jean Saint Paul, a waste handler in Environmental Services, said he was heartbroken to lose one of his closest friends.

“I have known Pete since 2006, and from the very first day, we became best friends. He would always help me with everything and taught me so many things in my life,” he said. “I am feeling like this is my personal loss, like a family member. I am emotional every day and pray that he is happy wherever he is now and still smiling. I miss you, my big brother.”

Henry Tapia, who worked with Mr. Phoenix for 18 years and was his direct supervisor, recalled how Mr. Phoenix always treated others with kindness and made even acquaintances feel like old friends.

“He always called people ‘young fellow.’ I still think about it and smile,” Tapia said. “He was a person of big heart.”

Mr. Phoenix was a friend and mentor to colleagues such as Carson Clark, a lead Environmental Services aid, who remembered how he brought both a lightness and dedication to his work.

“He always made you smile and laugh while performance your job,” Clark said.

Jimmy Caban, a supervisor in Environmental Services, said Mr. Phoenix was in a class all his own.

“Pete never had an unkind word,” Caban said. “He was the nicest person I’ve ever met, but first and foremost, he was always a gentleman.”

Mr. Phoenix is predeceased by his mother, Margaret Phoenix, his son Edwin Phoenix III and his brother, Edward Phoenix. He is survived by his wife, Denise Phoenix, his son Stephen Phoenix, two grandchildren, four sisters and many other loved ones.