During recent renovations to the Brigham’s Division of Plastic and Reconstructive Surgery clinic and administrative space, construction crews uncovered remnants of a historical operating room (OR) believed to have hosted the world’s first successful human organ transplant.

While removing walls, workers were surprised to find what appeared to be an old operating room with a balcony for watching surgical cases.

Current Brigham faculty members had heard over the years that old ORs from the Peter Bent Brigham Hospital — one of the Brigham’s predecessor institutions — were in the vicinity of this location, but they thought they were one floor below.

However, when compared to historical images in the hospital archives, architectural features of the room suggest it was likely the OR that Joseph Murray, MD, used when he transplanted a kidney from one identical twin to another in 1954. Murray would go on to receive the Nobel Prize in Physiology or Medicine in 1990 for this groundbreaking work and the subsequent development of immunosuppressive drugs.

The painting The First Successful Kidney Transplantation captures what Murray’s OR looked like before undergoing many renovations over the years for other uses. While the artist, Joel Babb, took some artistic liberties in recreating the scene on canvas, there are striking similarities between details in the painting and rediscovered room, such as the arches in the balcony, explained Catherine Pate, hospital archivist. 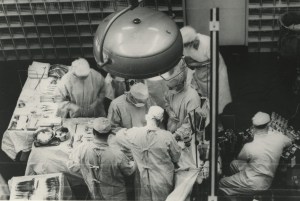 In this iconic 1954 photo, shot from the balcony above the operating theater, Joseph Murray (center) and his colleagues perform the first successful human organ transplant.

“The most requested picture of all the many thousands in the Brigham and Women’s Hospital Archives is the one we have of the kidney transplant between brothers Ronald and Richard Herrick on Dec. 23, 1954, in a Brigham operating room. From the evidence, it is likely this room,” Pate said. “The achievement of this — the first-ever successful human organ transplant — was comparable in the field of medicine to the first moon landing in the field of aerospace. The bravery of this step into the unknown, especially by the first donor, Ronald Herrick, and the physician/scientists of the Peter Bent Brigham transplantation team, takes your breath away when you stop to think about it. It happened here. What a legacy!”

The room itself was part of the original Peter Bent Brigham building at 15 Francis St., dating back to 1912. Through the ensuing decades, the space underwent numerous renovations. And while features of the room such as the balcony were retained in later reconfigurations, the original fixtures and furnishings were updated over the years and, subsequently, have been lost to history, explained Sonal Gandhi, vice president of Real Estate, Planning and Development.

“Although no original parts of the original operating room were found during this latest renovation, plans are underway to ensure this discovery is acknowledged and commemorated,” Gandhi said.

The historic OR also appears to be the operating room favored by legendary American surgeon Harvey Cushing, MD, known as the father of neurosurgery. From 1912 to 1932, Cushing was the Moseley Professor of Surgery at Harvard Medical School and founding surgeon-in-chief at Peter Bent Brigham Hospital. He was a pioneer in surgical technique, including electrocautery, and developed basic techniques and procedures still used in neurosurgery. He received many honors throughout his career, including the Pulitzer Prize for his biography of Sir William Osler.

The same OR was also used by Dwight E. Harken, MD, the chief of Thoracic Surgery at the Peter Bent Brigham Hospital from 1948 to 1970, to demonstrate early cardiac surgery. Harken is often considered one of the founding fathers of heart surgery and credited as the creator of intensive care units for critically ill patients.