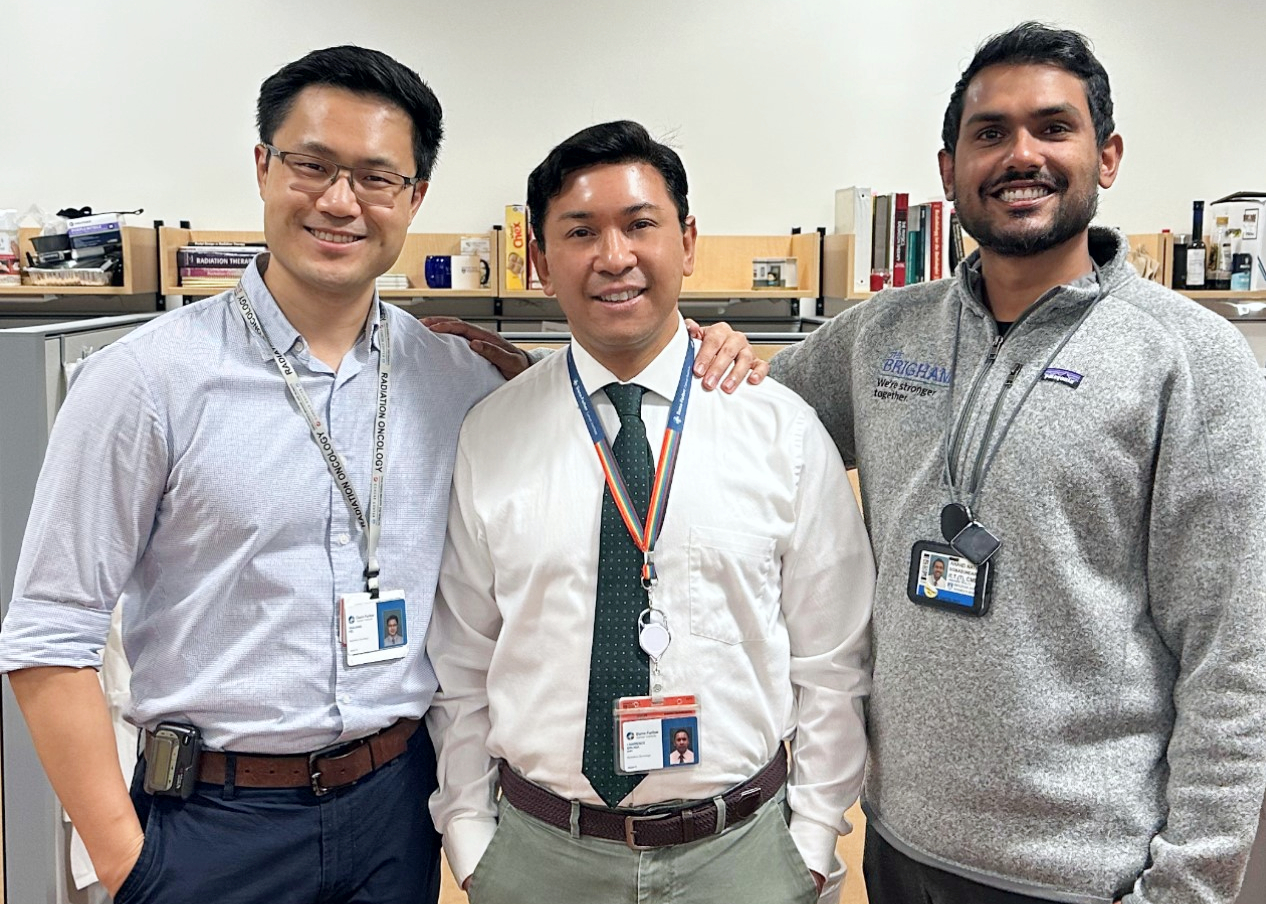 “I call them my family,” says Tony Orlina (center), whose life was saved by friends and colleagues Yaguang Pei (left) and Anand Somasundaram (right).

Tony Orlina, BS, (R)(T), CMD, was exhausted when he returned to his South End apartment on July 24.

He had just arrived home from Logan Airport after spending a week in Virginia with his siblings to care for their 83-year-old mother as she recovered from open-heart surgery. Although the procedure was successful, it was a stressful visit. Physically and emotionally, he was drained.

But it was Sunday afternoon, and tomorrow Orlina was due back to the Brigham, where he works as a treatment planning coordinator and medical dosimetrist in the Department of Radiation Oncology.

Orlina, 52, who lives alone, started to unpack and get ready for the week ahead when he was suddenly overcome by a blinding headache. Then, he vomited. “Hey, Ollie,” he said to his French bulldog, Oliver, “I’m just going to lie down.”

That was the last thing he remembers.

When Orlina opened his eyes again, he wasn’t in his apartment anymore. He looked around and saw someone in scrubs watching him carefully.

“Do you know where you are?” she asked.

“In the hospital,” he guessed.

“Yes,” she responded. “You had an aneurysm.”

By then, a whole day had passed. It was Monday night. Orlina was in the Neurosciences Intensive Care Unit (ICU) at the Brigham, recovering from emergency brain surgery.

He would soon learn the only reason he was there — and alive — was because two fast-thinking colleagues and loyal friends trusted their instincts and decided to check on Orlina at home when he didn’t show up for work that morning.

“If your friends hadn’t found you, you probably wouldn’t be here,” his neurosurgeon, Mohammad Ali Aziz-Sultan, MD, MBA, chief of the Division of Vascular/Endovascular Neurosurgery, later told him.

Anand Somasundaram wasn’t supposed to come into work so early on Monday.

He was originally scheduled to arrive closer to lunchtime, but Somasundaram, also a medical dosimetrist in Radiation Oncology, had wanted to finish a few tasks before his upcoming time off.

When he stopped by Orlina’s desk to say hello around 8 a.m., he was surprised to find it empty.

Of all people, he would know. In addition to being co-workers, he and Orlina are longtime friends and former roommates. When Somasundaram moved to Boston years ago, he didn’t know many people in the city, but that changed when he started working at the Brigham.

“Tony befriended me quickly, and we clicked really well,” Somasundaram said. “He made me feel at home.”

They became roommates when Orlina learned that Somasundaram was living in a 180-square-foot studio as he saved for an engagement ring.

“One Sunday, Tony called me up and asked, ‘Do you want to live together?’ I said, ‘I can’t afford where you live.’ He said, ‘You can pay me whatever,’” Somasundaram remembered. “I couldn’t believe it. I met this guy five months ago.”

But that’s just the kind of friend Orlina is, he explained.

“He’s the most caring person,” Somasundaram said. “We cooked together. We hung out. We went to fairs, festivals and breweries. We got really close. I think of him as family.”

In the time they lived together, Somasundaram learned that Orlina is a man of routines — meticulously organized, always on time and relentlessly reliable. So, when Orlina didn’t show up for work that morning, Somasundaram sensed something was wrong.

He tried texting Orlina. No response. He called him. No answer. He checked his social media accounts. He tried sending him a message on Facebook. He initiated a FaceTime call. Nothing.

“I decided to check the board. We have this whiteboard that shows who’s on call, and it said that Tony was on pager,” Somasundaram said. “I was like, one, Tony always comes to work, and two, if he’s on pager and can’t make it, he’d get someone to switch with him. At that point, it was a red flag.”

He reached out to their other close friend and colleague, Yaguang Pei, medical dosimetrist and treatment planning workflow manager. 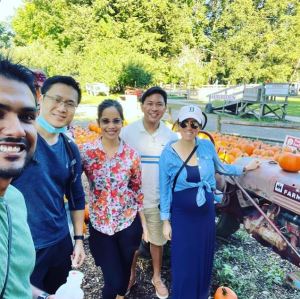 From left: Somasundaram and Pei, along with their partners, and Orlina enjoy an outing to a New England orchard last fall.

Pei was on his way to the office when his phone buzzed.

“I got a text from Anand saying, ‘Have you seen Tony? He hasn’t shown up to work,’” Pei recalled. “Tony comes to work religiously every single day, and he always comes to work on time.”

Pei abandoned his commute and headed to Orlina’s apartment building. After entering the lobby, he approached the concierge and started to explain why he was there. The man interrupted him and pointed across the lobby.

“I looked over, and there was Tony sitting on the couch,” Pei remembered.

Right away, Pei realized something was wrong.

“Visibly, he looked fine, but he seemed off. It wasn’t the Tony I knew,” said Pei, who also formed a close friendship with Orlina when he moved to Boston several years ago and has come to think of him like family. “He said he was just tired, but he was confused. He didn’t realize he was in Boston. He thought he was still in Virginia.”

Pei knew he had to act. He took Orlina to the Brigham’s Emergency Department (ED) and let Somasundaram know they were on the way.

“There wasn’t a question in my mind about where we were going to take him,” Pei said. “We’re going to the Brigham.”

In the ED, staff performed a CT scan, which revealed a large amount of bleeding in the space surrounding Orlina’s brain, a life-threatening condition known as a subarachnoid hemorrhage.

“When you see this pattern of blood, it’s usually associated with an aneurysm,” explained Sultan.

A cerebral aneurysm occurs when a blood vessel in the brain develops a weak spot, causing it to balloon. When the bulge gets large enough, it can burst.

Half of people who experience a ruptured brain aneurysm die before they receive treatment, and only a third of those who do reach a hospital do well, Sultan explained. 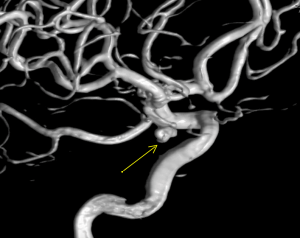 Cerebral aneurysms occur when blood vessels in the brain develop weak spots, causing them to bulge and potentially burst, as seen in this 3D imaging of the blood vessels in Orlina’s brain prior to surgery.

“Tony had a massive rupture, and then the blood prevented the normal fluids around his brain from draining properly, exerting a lot of pressure,” Sultan said. “Either one of those things could have killed him.”

“We’re on the forefront of diagnosis and treatment. We were one of the first in the country to bring together multidisciplinary teams and build hybrid operating rooms, and we’re on the leading edge of innovation, technology and research,” Sultan said. “It’s like having a toolbox with all these different tools, and we select the right ones to tailor treatments for each patient.”

After draining some of the excess fluid in his brain and performing an CT angiogram to confirm the location, shape and size of the aneurysm, Sultan and his team brought Orlina to Interventional Suite, where they conducted an endovascular coiling procedure. Using X-ray imaging to guide their path, the team snaked a small catheter through a blood vessel in Orlina’s leg all the way to his brain. Once there, the angiogram served as a roadmap to the ruptured aneurysm, which the surgical team repaired by depositing platinum coils into the ballooned area to plug it up.

The procedure was completed in about an hour. Orlina was cared for in the Neuro ICU for another two weeks before returning home to continue his recovery. Today, he’s left with very few side effects from the event; his once-boundless energy now has its limits, but he says life is otherwise back to normal.

His recovery has been nothing short of remarkable, Sultan said.

“Tony had one of the worst cases I’ve seen — and one of the best recoveries,” he said. “Even in the toughest moments, he was even-keeled, engaged and positive. He was inspirational.”

While Orlina was in the hospital and after his discharge, his colleagues in Radiation Oncology sprang into action to help him — including caring for his canine companion until he was well again. 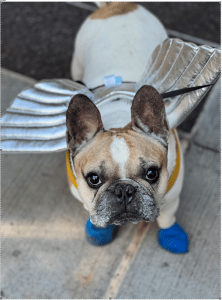 Pei cared for Orlina’s beloved French bulldog, Oliver, while he was in the hospital.

“Tony is the glue that holds us together. He’s always the one who checks in on us,” said Pei, who took care of Oliver for three weeks. “People in the department really stepped up to support him, visited him multiple times a day in the hospital and contributed to a large UberEats gift card so that he would have food at home. Everyone pitched in to help.”

Daphne Haas-Kogan, MD, chair of Radiation Oncology, said she was not surprised by the team’s response. She sees that same compassion on display every day.

“Our department is like no other. It stands apart in my mind as a place where people just go to the ends of the Earth and back for each other, and that translates into not just to watching out for each other but also going the extra mile for our patients and families,” she said. “How inspiring it is to be part of a group that cares so deeply and is willing to do so much, big and small, for one another.”

That feeling resonates with Orlina, who is deeply grateful for the care teams who saved his life and all that his friends and colleagues have done to support him.

“It’s not just work,” Orlina said. “Yaguang and Anand — I call them my family.”

And true to form, Orlina returned to work as soon as he could. “Classic Tony,” Pei said with a laugh.

8 Responses to “When a Colleague Didn’t Show up for Work, His Brigham Family Checked on Him at Home — a Decision That Saved His Life”