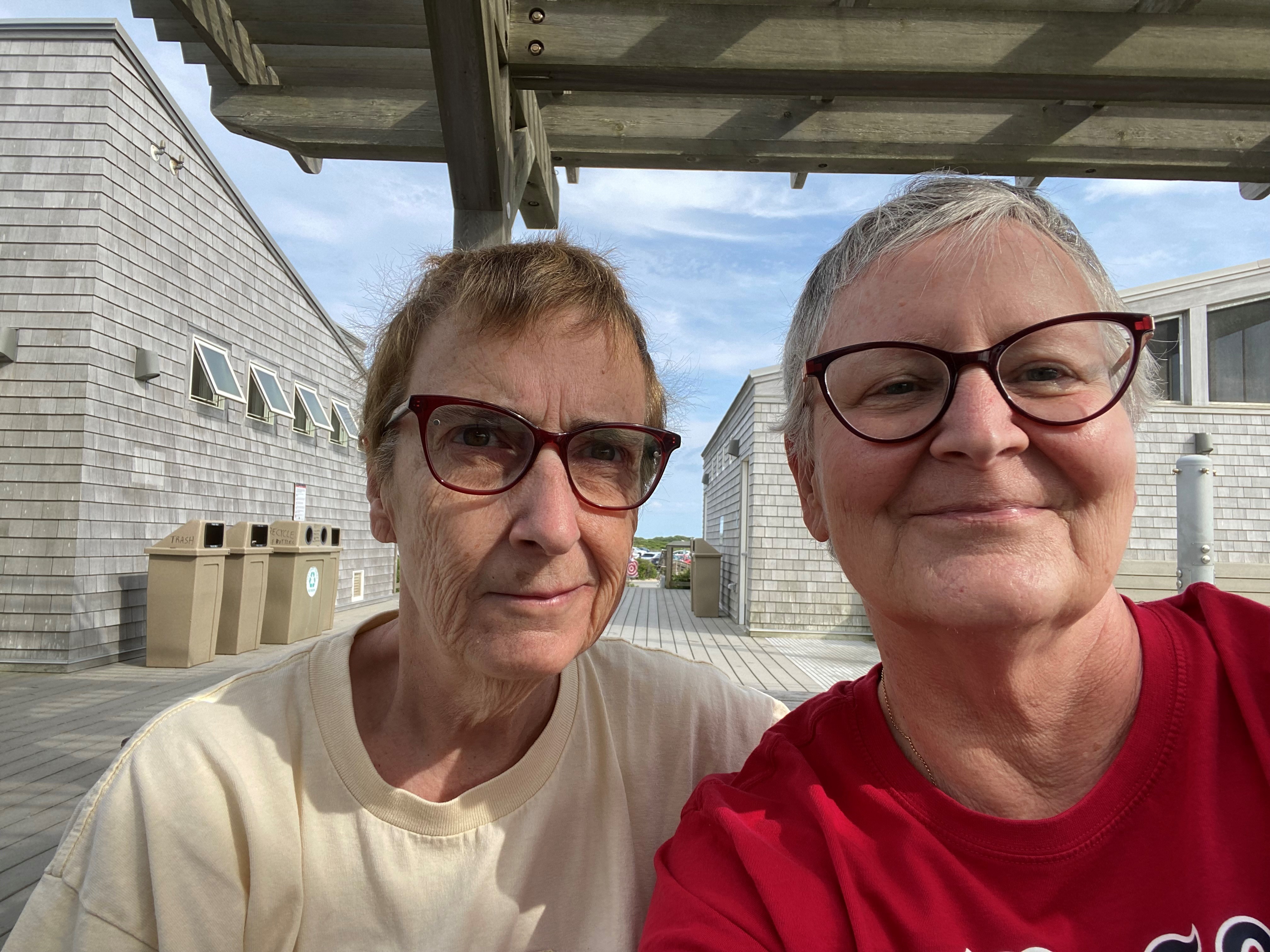 “It was very clear something was going on,” says Peg Movelle (right), describing the events that led to her wife, Sue Morong (left), being diagnosed with early-onset Alzheimer’s disease.

After building a long and successful career in finance, Sue Morong never expected that numbers would one day become a source of confusion. But shortly after starting a new job a few years ago, she made a serious error at work.

“Sue dealt with spreadsheets all day, every day. She was a whiz at numbers. All of a sudden, they were almost foreign to her,” recalled Peg Movelle, Morong’s wife of 25 years. “It was very clear something was going on.”

In 2018, at age 58, Morong was diagnosed with early-onset Alzheimer’s disease, a rare form of the disorder affecting people under age 65.

While her episodes at work ultimately became a wakeup call for the Jamaica Plain couple, they later realized it was only one of many worrying signs that Morong’s memory and cognitive skills had begun to deteriorate. Activities requiring coordination and concentration, such as driving and cooking, had become difficult and even dangerous for her.

“You don’t really think of people in their 50s and early 60s as having significant memory issues,” Movelle said. “But there were all of these minor things that added up to major things over time.”

After visiting her primary care physician and a general neurologist, Morong was referred to the Brigham’s Seth Gale, MD, a cognitive-behavioral neurologist who specializes in caring for patients with Alzheimer’s and an investigator with the Center for Alzheimer Research and Treatment (CART), which conducts research related to the disease.

Through CART, many clinical trials enroll patients with mild impairment who have underlying Alzheimer’s disease but haven’t yet developed loss of independence in daily functioning abilities.

“Sue is someone with early Alzheimer’s who was quite high-functioning in day-to-day life,” said Gale, co-director of the Brain Health Program in the Division of Cognitive and Behavioral Neurology. “So, I knew she was a good candidate.”

Although there are FDA-approved treatments for Alzheimer’s disease, these only have the potential to lessen some symptoms to a modest degree. No drug has been proven to stop or reverse the disease’s progression, and the newest drug for Alzheimer’s that was approved in the U.S. in 2021 showed mixed results in its effectiveness. Thus, the decision to participate in clinical trials can be a delicate one for many families, adding to the uncertainties and emotional ups and downs that already accompany living with Alzheimer’s.

Even so, the choice to participate in clinical trials was a welcome one for the couple.

“We were thinking not so much that there would be some miraculous breakthrough, but that we might as well give back and help others through research, since there really wasn’t anything else we could do,” Movelle explained.

In addition to providing opportunities for patients and families to participate in cutting-edge trials, the CART team also engages with Alzheimer’s and dementia investigators around the world to share their findings — hoping to one day discover effective therapies for all patients.

“We try to do no harm, but can we actually help? That’s the big question,” Gale said. “The treatment of progressive brain diseases is an enormous, remaining challenge in medicine. There have been hundreds of medications over several decades studied for the treatment of just Alzheimer disease; six of these have been approved in the U.S., five remain on the market, and none of them definitively slow the disease in any way. While knowledge about Alzheimer’s and related dementias has exploded in recent years, there is still so much work to be done.”

Morong was eligible to participate in two trials. The first study tested a medication that hoped to disrupt the signaling pathways that cause the development of amyloid plaques — clumps of protein that form in the brain of someone with Alzheimer’s. She felt there was no benefit from the experimental drug.

She later enrolled in another trial of a monoclonal antibody treatment for early Alzheimer’s, but was unable to complete the study when an unrelated medical issue affected her ability to come in regularly for the IV infusions.

Outcomes like these are not uncommon, Gale explained, but he emphasized that they also aren’t the end.

“Patients and families are often told, ‘There’s nothing we can do,’ but that’s not correct,” Gale said. “I tell newly diagnosed patients that, of course, nothing can sugarcoat the news they’re hearing today, but there are positive and effective things that they and we can do, starting today. There is a lot of evidence that brain-healthy behaviors — like exercise, healthy eating and mental stimulation — can change the trajectory of decline to some extent, perhaps especially for individuals like Sue who have the early stages of mild cognitive impairment.”

Movelle has encouraged Morong to pursue these activities and believes they have helped slow her decline. However, as the years have passed, certain parts of everyday life have inevitably changed for them both.

Morong, who had done most of the cooking throughout their time together, has mostly hung up her apron and now leans on her wife as head chef for their household. Although once an avid bookworm who could devour a novel in an afternoon, she has shifted her daily reading to reciting the headlines for Movelle. And instead of driving or giving directions, Morong now relaxes in the passenger seat while her wife drives and Google Maps leads the way.

As a caregiver, Movelle regularly reminds herself to prioritize her own well-being, too, and to take it one day at a time. For those also caring for a loved one with Alzheimer’s, she shared three pieces of advice: “Enjoy the humor in it, allow your tears and cherish every moment.”