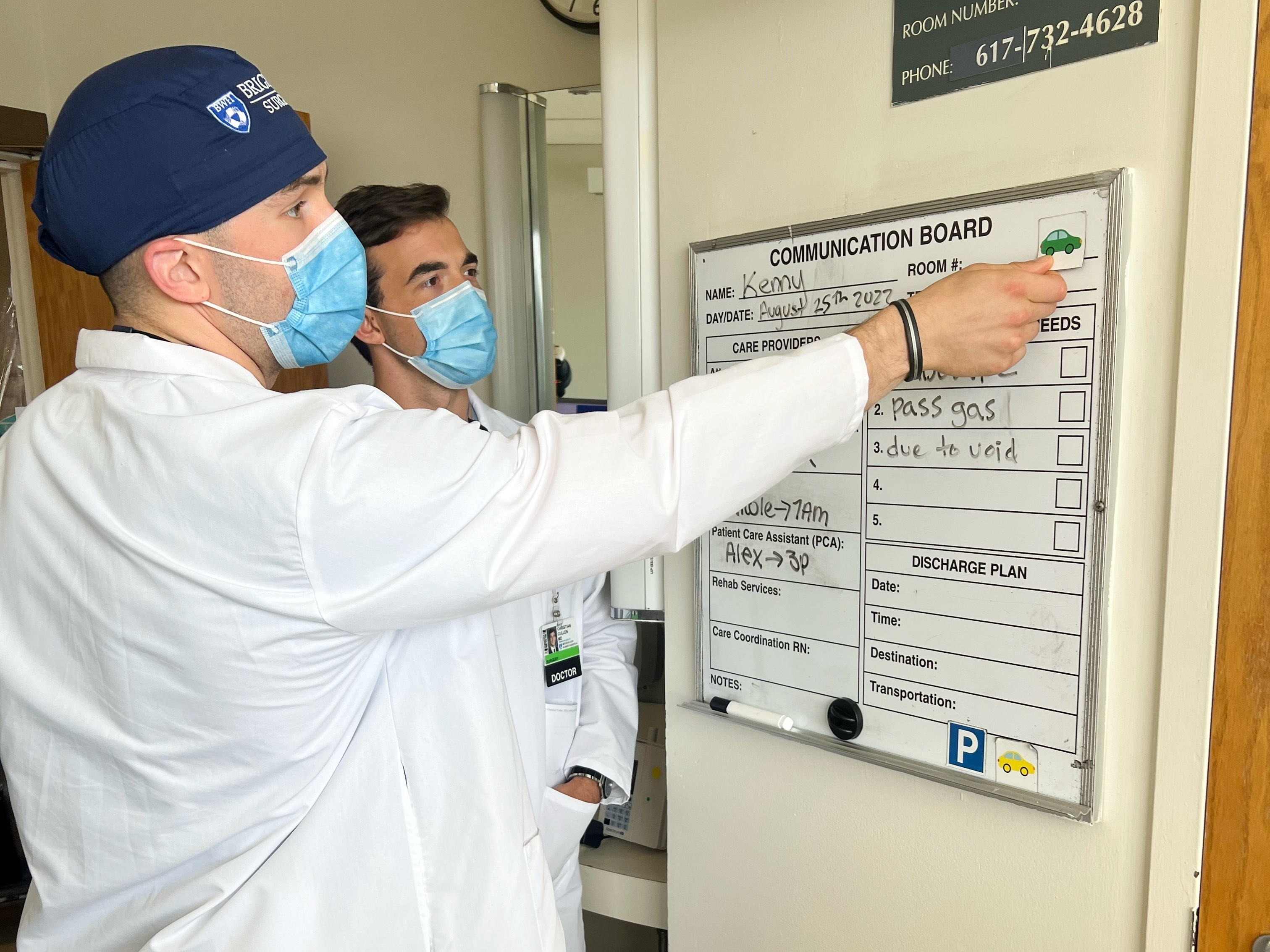 From left: Surgery interns John Gaspich and Christian Cullen demonstrate a simple system used on Braunwald Tower 15 to indicate a patient is ready for discharge and should call their ride.

When Caprie Bell, MSN, RN, a charge nurse on Braunwald Tower 15, enters a patient room during her morning rounds, she does two things: First, she greets her patient with a warm and friendly smile. Next, she glances at a whiteboard on the wall to see if there’s a small magnet in the upper corner.

That magnet, which depicts either a green or yellow car, is used on the unit to indicate the patient’s readiness for discharge after recovering from surgery. If there’s a green car, that means the team of surgeons and physician assistants (PAs) who rounded earlier that morning determined the patient can be discharged as soon as their ride arrives. If there’s a yellow car magnet on the whiteboard, it means the team believes the patient is almost ready to go home but first needs to meet certain clinical benchmarks.

“When I see the green car on the board, I know that a conversation has taken place,” Bell said. “I can say to the patient, ‘Good morning. It looks like you’re going home today. Have you called your ride?’”

The intentionally low-tech system has bridged a communication gap that existed between clinical teams in Surgical Intermediate Care ― enabling clinically ready patients to avoid unnecessary delays at discharge while improving teamwork across the unit.

The multidisciplinary project began in response to capacity challenges in the flow of patients from the Operating Rooms (ORs) to the Post-Anesthesia Care Unit (PACU) to the surgical floors. An analysis in May 2019 found that 12 percent of surgical patients on Tower 15 were discharged by noon, even though a greater proportion of them were ready to safely discharge by that time.

“We sometimes know at 6 a.m. which patients are ready to go, yet it was taking six to eight hours for them to leave the hospital,” said Jennifer Beatty, MS, PT, PA-C, director of Clinical Operations and Surgical Physician Assistants. “That’s not a positive experience for anyone. It means that staff on the floor are slammed with both discharges and admissions in the afternoon, patients in the PACU are waiting for a bed, and the patients who are going home will be sitting in city traffic when they could have left much earlier. We knew there had to be a better system.”

As it turned out, there was.

Since the car magnets were introduced in conjunction with a daily morning huddle between Beatty and Tower 15 charge nurses and nursing leaders, the percentage of patients on the unit who are discharged in the morning has more than doubled. As of June 2022, 30 percent of surgical patients on Tower 15 are discharged by noon.

“This project has been an amazing collaboration with shared ownership to improve the discharge process for our patients,” said Karen Reilly, DNP, RN, MBA, NEA-BC, associate chief nursing officer for Critical Care, Cardiovascular and Surgical Services. “The 15th floor has been able to develop a process that allows for timely discharge that not only impacts the patient going home but also improves patient throughput within the hospital.”

“We often focus on the high-tech ― and high-cost ― solutions when there are times that a low-tech, low-cost solution is actually the most effective,” Robinson said. “The car magnet project is an example of this, and the results speak for themselves.”

So, what had been causing the discharge delay? In early 2019, clinical leaders enlisted the help of Process Improvement experts from Analytics, Planning, Strategy and Improvement (APSI) to find out.

After conducting observations on the unit and staff interviews, the Process Improvement team concluded that nurses weren’t receiving a reliable signal that the patient was ready for discharge in the morning.

Due to the unique needs of the OR schedules, surgeons and surgical PAs complete their rounds earlier than many other units ― usually between 6 a.m. and 7 a.m. ― and before their nurse colleagues’ shift change. In addition, like many rounding clinicians, surgeons and PAs typically entered all their orders later in the day.

That misalignment meant nurses often had to navigate conflicting information about a patient’s discharge readiness based on secondhand information from the patient versus what their electronic medical record indicated.

“There was an information lag of three to four hours,” explained Mark Galluzzo, MHA, lead process improvement consultant for APSI. “The rounding clinician knew that patient A had met all clinical milestones and would plan to put in a discharge order, but that information was just in their brain. Then the patient might tell their nurse, ‘The doctor said I’m going home,’ but when the nurse went into Epic, they didn’t see any record of that. Until the unit staff felt confident discharge was going to happen, they weren’t going to start to move on it.”

While the underlying challenges were complex, those involved in the project said it soon became clear that the solution was simple: “All we needed to do was tell each other what was happening,” said Jan McGrath, MHA, BSN, NE-BC, nursing director for Tower 15.

Beatty agreed: “By 7:30 a.m., we know a lot about what our patient movement will be for the day, but we recognized that didn’t play into how we prioritized our activities and communicated with nurses.”

The APSI team came together with four PAs and four staff nurses on the unit to brainstorm ideas to bridge the gap. However, conventional approaches, such as adjusting schedules or having clinicians pause between rounds to enter orders, were not conducive to the way each role group worked. 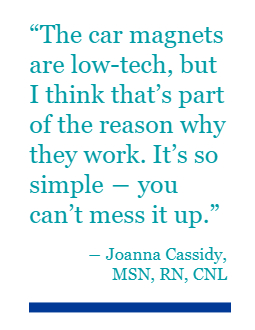 what became the car magnet ― that nurses on the morning shift could trust to indicate discharge readiness. Additionally, rounding clinicians committed to making it a priority to submit any orders for “green car” and “yellow car” patients right after completing rounds. And finally, the teams implemented a multidisciplinary huddle at 8:45 a.m. to ensure everyone had the same information and to address any unresolved issues in real time.

“The car magnets are low-tech, but I think that’s part of the reason why they work. It’s so simple ― you can’t mess it up,” said Joanna Cassidy, MSN, RN, CNL, assistant nurse director on Tower 15, who was part of the initial workgroup. “The daily huddle we have with Jen has also been a huge help because she’s able to answer a lot of our questions and follow up as needed. It has really improved communication across the unit.”

While the project has been a work in progress, its benefits continue to unfold.

“The metrics are impressive, but I think the bigger part of it has been the culture change on the floor,” Beatty said. “The mindset has changed.”

Kendra King, PA-C, a PA in General Surgery, said that using the magnets is now “second nature” for her and her colleagues during morning rounds.

“You know when you’re in the room that you have to move the car,” King said. “It took a lot of training to get that muscle memory down, but it’s truly saved two to four hours every day in eliminating all the back and forth we used to do. In the end, it’s better for everyone.”

For Bell, the car magnets have also improved her workflow as a charge nurse.

“I have a better understanding of those who are ready to go in the morning, and that knowledge trickles down to the rest of the team. For instance, I can inform the nursing assistants sooner that this patient is going to be discharged in the morning, so they know it’s a good time to help the patient gather their belongings or shower so that they’re ready when their ride arrives,” she said. “It’s all about how we can better care for the patients because they’re the No. 1 reason we’re here.”