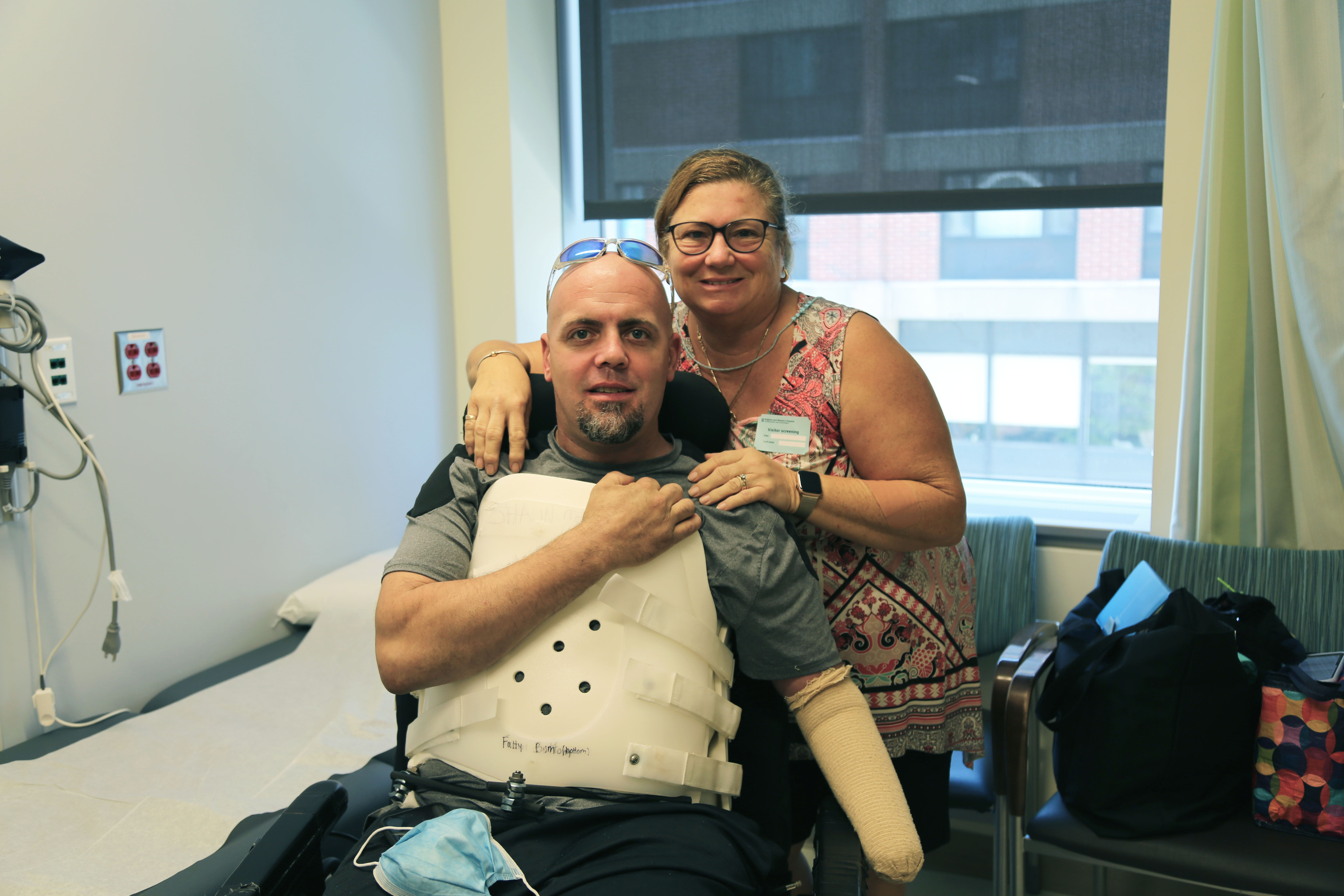 Shaun Melendy with his mother, Joyce, during a recent follow-up visit at the Brigham.

When Shaun Melendy, 42, was kayaking down the river behind his West Bridgewater home one winter morning and realized a section of it had frozen over, there was, in his view, an obvious solution to this problem. It did not involve getting out of the water.

Instead, Melendy, a U.S. Coast Guard veteran and diehard outdoorsman, plunged a hunting knife into the ice and used it to pull himself along. As he inched his kayak down the river, he enjoyed the fruits of his labor: a peaceful paddle through a snow-covered forest.

On the surface, the story is a simple anecdote that amuses his loved ones. But it also speaks to something deeper — an adventuresome spirit and relentless optimism in the face of adversity.

Those qualities continue to guide Melendy through what has become the most difficult chapter of his life, which unfolded when he was struck on his motorcycle by a distracted driver who had drifted into oncoming traffic on May 5.

The crash left him with devastating injuries, including the traumatic amputation of his left hand at the scene.

First responders rushed Melendy to the Brigham, where he underwent emergency surgery for severe injuries he sustained throughout the rest of his body. In addition to suffering fractures to his skull, spine, hips, legs, ankles and feet, he needed an 8-inch skin graft to cover a wound on his left leg.

After waking from a medically induced coma, Melendy says one of his first memories was seeing a friendly face at the foot of his bed.

“He had his mask on, but he had a bright smile in his eyes,” Melendy remembered.

It was Matthew Carty, MD, of the Division of Plastic and Reconstructive Surgery, who had stopped by to speak with him about the opportunity to undergo an experimental surgery — part of a clinical trial in collaboration with MIT — that could make it easier for him to use a prosthetic limb. If successful, the procedure would preserve the normal signaling between his brain and muscles, a connection that ordinarily gets severed in an amputation.

“He said, ‘Shaun, I think you’re going to be a good candidate for this surgery. You seem like the type of guy who was active before, and I think I can help you stay active in the future. I don’t think any of the things you’ve done the past are going to end,’” Melendy recalled.

That was all he needed to hear.

“I said, ‘Yes, absolutely,’” Melendy said. “I’m not one to sit still. I love being outdoors. I surf, swim and race kayaks. I cut firewood. I climb trees. I do sprint triathlons. Knowing I do all these things, I thought I would be more upset. But I just knew that I was going to be able to truck forward and figure out what the next step is. I can’t wait to use a prosthetic.”

Another key motivator for him was the ability to help other amputees, particularly fellow veterans, by participating in this clinical trial.

“I want to help people move forward from what they lost,” he said. “Veterans who come home from war should not have prosthetics that don’t work for them.”

That bedside conversation would lead Melendy to become a pioneer — making him the first patient in the world to have lost an upper limb in a traumatic injury and undergo this novel procedure, known as an agonist-antagonist myoneural interface (AMI) amputation.

Traditional amputations, which have seen little innovation since the Civil War, cause amputees to lose the ability to finely control the muscles in their residual limb and, more importantly, the ability to perceive where it is in space without looking at it. This often leads to difficulties when using a prosthesis. 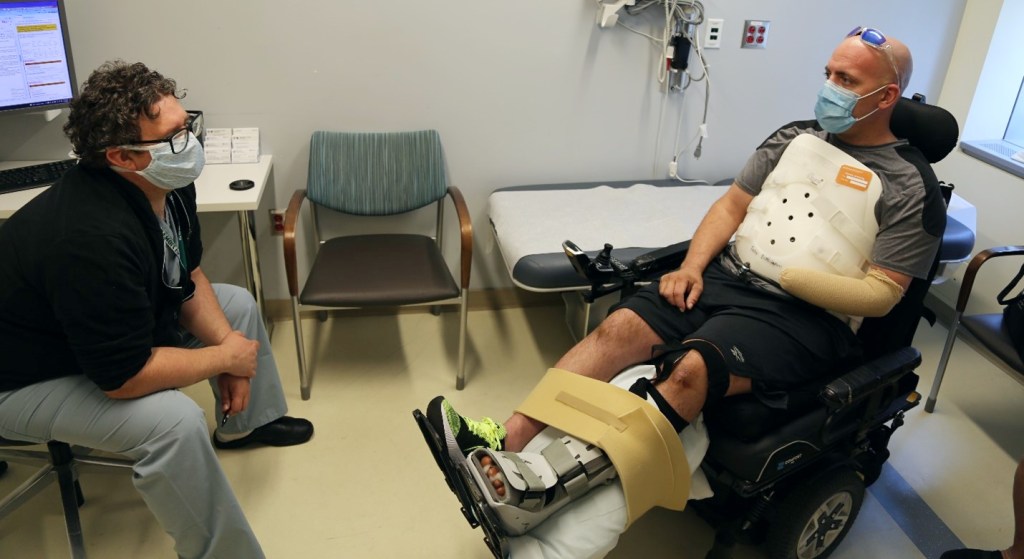 In 2016, a clinical team at the Brigham led by Carty, in collaboration with Hugh Herr, PhD, of the Center for Extreme Bionics in the MIT Media Lab, invented a new method of amputation for lower limbs. It was called the Ewing amputation in honor of its first patient, Jim Ewing. The AMI procedure maintains natural linkages between muscles in an amputated limb, so amputees using a prosthesis feel as if they are controlling a physiological limb.

Importantly, this method can send movement commands from the central nervous system to a robotic prosthesis, so when an amputee intends to flex their ankle, for instance, the robotic limb responds appropriately. It also relays feedback describing movement of the joint back to the central nervous system, allowing an amputee to sense the speed, location and other attributes of the artificial limb.

In 2018, the team adapted the procedure for upper-limb amputations. Since then, four patients at the Brigham had undergone AMI amputations at the arm or wrist, but all were under elective conditions — typically after enduring chronic pain for years due to an old injury. Melendy became the first to have the experimental surgery following a traumatic amputation.

“We’ve always thought these techniques could be applied in the acute setting — something we believe will be especially useful for military personnel with combat injuries,” Carty said. “But in terms of testing that hypothesis, there are clear difficulties: Such events are rare, and obviously we cannot anticipate when the opportunity will arise. Shaun turned out to be a great candidate for surgery and continues to do very well, proving our assumption that upper-extremity AMI amputation can be done safely in the context of acute trauma.”

After receiving a temporary closure at the wound site and recovering from his other surgeries, Melendy prepared to undergo the five-hour AMI procedure.

“The fact that we were working from a traumatic injury made it a little bit harder because we had to use our knowledge of anatomy to reconnect the muscles in the correct manner. You can do that with relative reliability, but it’s much easier when the limb is still in place,” Carty explained. “It made it a little more difficult, but by no means impossible.”

During a post-operative visit six weeks after the surgery, Melendy said it was “mind-blowing” to see even the early results.

“Dr. Carty was checking my residual limb by putting his hands at the end and asked me to move my thumb,” he said. “You could see the muscle constructs moving under the skin, as the surgery was designed to do. Then he asked me to move all my fingers, and all my ‘fingers’ were moving. It’s amazing how those muscles and nerves can still talk to each other.”

After his discharge from the Brigham, Melendy continued his recovery at Spaulding Rehabilitation Hospital for his other injuries, which amounted to about 20 broken bones and required 10 surgeries over three weeks. Throughout his time at both institutions, Melendy said the care he’s received has been exceptional. 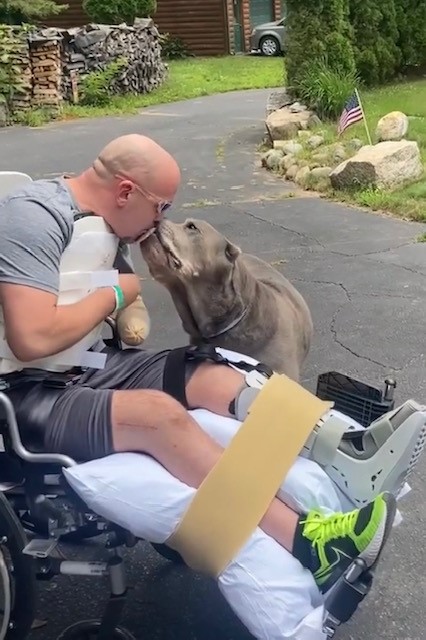 “The coordination between the staff and doctors has been wonderful, and they all made me feel very comfortable,” he said. “They even told me I gave them inspiration. They would tell me, ‘Shaun, I was having a bad day, and since coming in and talking to you makes my day better, I came to see you first.’”

Among those he connected with was Brigham nurse Alex Poliansky, RN, of Braunwald Tower 8.

“He was so optimistic and upbeat. Any other person in his condition probably would have been depressed, but he was not giving up,” Poliansky said. “It was easy to go along with that. We were all hopeful for him.”

Melendy credits his positive outlook to an influential figure in his life: his Grandma Candy.

“My grandmother was paralyzed from polio from the time she was 2 years old until she passed away. She brought me inspiration throughout my whole life,” he said. “So, when I woke up and noticed my hand wasn’t there, I didn’t cry. I wasn’t sad. I just knew I would have her strength behind me to guide me through it.”

The support of his loved ones, including his parents and sister, as well as his local community, has also been incredibly uplifting, he said. And while he has remained relatively stoic throughout his experience, Melendy acknowledged he did have one emotional moment during his recovery: FaceTiming from his hospital bed with his dog, Blu.

“Losing my hand didn’t bother me as much as not being able to spend time with him,” he said. “The first time I FaceTimed with him, I started speaking to him in German, as I had taught him a lot of German commands, and to see him responding when I told him to bark — that made me cry.”

3 Responses to “After the Loss of His Hand, First Patient to Undergo Novel Amputation in Acute Setting Ready to Make Waves Again”