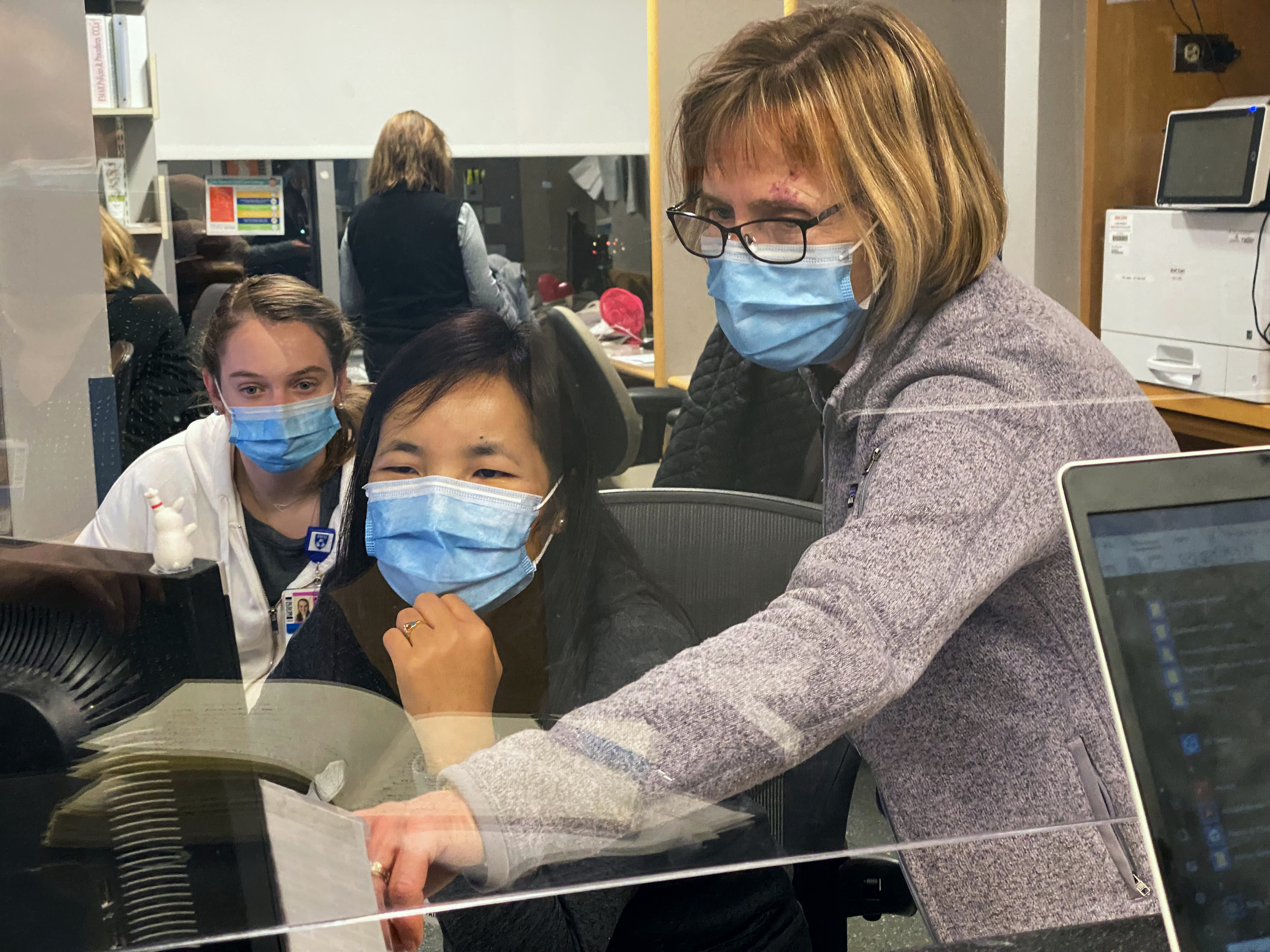 From left: Unit coordinators Allison Mulhern and Dhanani Gurung with Anne Bane during the Voalte implementation in the Connors Center for Women and Newborns in 2021

When Barbara Lakatos, DNP, PMHCNS-BC, APRN, and Christine Murphy, PMHCNS-BC, CARN-AP, are providing psychiatric nursing consultations on inpatient units, they often need to page a staff member and wait for a return call before they can move to their next patient on another unit.

That’s no longer the case, thanks to the rollout of Voalte, a communication tool that enables HIPAA-compliant texting and voice calls among staff. Launched previously in limited areas of the hospital, Voalte was recently implemented throughout inpatient areas and roles to connect staff in a unified directory. The implementation was made possible thanks to funding from the Caregivers Fund, which provides critical resources to support Brigham employees’ well-being and address emerging needs.

“Voalte has improved our ability to communicate with team members as we move between units,” said Lakatos, who serves as program director of the Psychiatric Nursing Resource Service with Murphy. “We can call, text and page from the app, which streamlines communication and decreases redundancy.”

Christine Wang, MD, a resident in the Department of Medicine, also noted the increased efficiency and positive impact on patient care.

“It’s so easy to check in and close the loop with nurses and other providers on the clinical team, and it decreases any waiting time because Voalte is at our fingertips,” she said. “It also improves quality of care for patients because we’re able to work through issues together as a team in real time.”

A Convenient Way to Connect 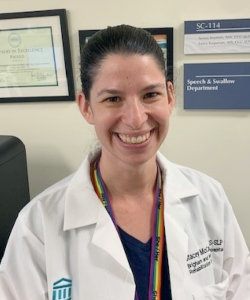 Following the most recent rollouts of Voalte in July, 3,800 staff are now experiencing the benefits of the mobile technology.

After signing into Voalte, staff can look up patient names, medical record numbers and bed/room numbers. Staff can see the care team members for each patient, initiate a call or text and confirm when the recipient has received and read a message. Voalte also indicates if a care team member is offline.

As of July 22, staff have sent an average of 10,077 texts and placed approximately 580 calls per day with Voalte, with about 860 active users per day.

“It’s very convenient to be able to send a message via Voalte without having to log into a computer,” said Stacey McCauley, MS CCC-SLP, speech language pathologist in Rehabilitation Services.

The Speech Language Pathology team began using Voalte earlier this spring and created a daily group message to stay in touch about new consults and other timely information. “We’ve been looking forward to more staff joining so we can easily communicate with other members of the interdisciplinary team,” McCauley said. 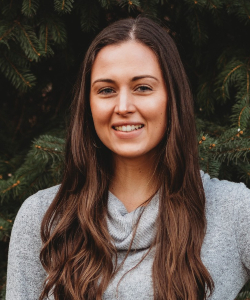 Staff in Pharmacy Services had a similar experience.

“Voalte has been particularly well-received by pharmacists, as it has allowed for easier and more efficient communication with other members of the health care team, as well as with colleagues within the Pharmacy,” said Jeremy Degrado, PharmD, BCCCP, BCPS, clinical pharmacy manager.

Maddy Pearson, DNP, RN, NEA-BC, senior vice president of Patient Care Services and chief nursing officer, noted Voalte’s positive impact on the ways staff communicate and collaborate. “Our goal was to improve the experience of staff and providers and streamline the way we communicate with colleagues and across different teams,” she said. “It’s wonderful to hear from our teams that they are already noticing a difference in workflow. We’re also grateful for constructive feedback that will help us refine our processes as we move forward.”

Over the past two weeks, the implementation team launched the tool in numerous inpatient units and departments in two large waves.

Jessica Ruxton, BSN, RN, and Rachel Colby, BSN, RN, shared that the rollout on Shapiro 9/10 went smoothly and that they are already experiencing the benefits of Voalte. 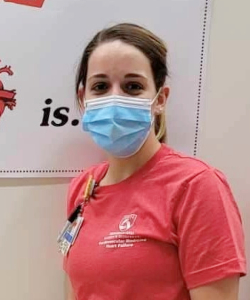 “The feedback has been nothing but positive,” says nurse Rachel Colby.

“Voalte allows for closed-loop communication with the whole multidisciplinary team,” said Ruxton. “The conversations are happening in real time, allowing non-urgent concerns to be addressed sooner with prompt response time, putting our patients’ minds at ease.”

Colby agreed. “Voalte is fabulous,” she said. “So far, the feedback has been nothing but positive. Everyone is loving the easy use and quick way of communication.”

During the July implementation, staff received support from the Voalte team, Nursing Informatics, nursing leadership and a group of “go-live” volunteers.

“I want to thank Anne, Cath, Jenni, Chuck, Mike and Mallika for leading this effort, as well as all staff for embracing the technology and sharing their feedback to help us continually improve,” said Adam Landman, MD, chief information officer and senior vice president of Digital for Mass General Brigham. “For a project this size, the rollout has gone very smoothly, and we’re excited to already be hearing from staff about how it is benefiting their workflow, improving communication and, ultimately, enhancing the delivery of care.”

Building on Success in the Connors Center 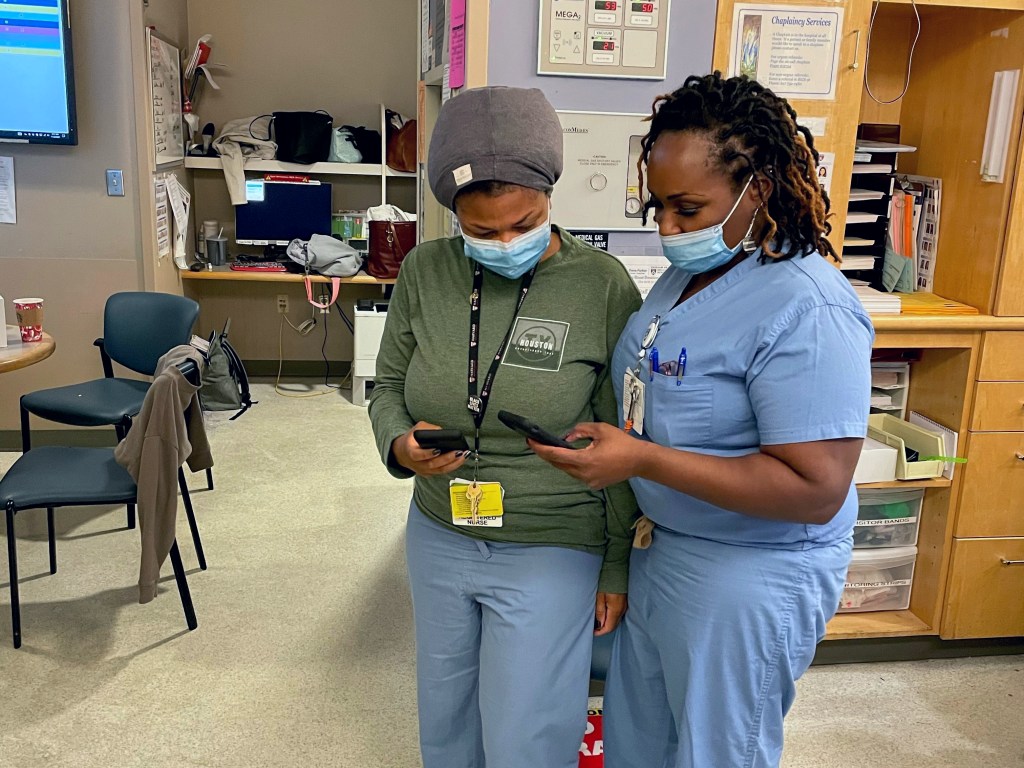 From left: Labor and Delivery nurses Catrina Pitts and Chanel Daly try out Voalte during the CWN rollout last year.

Some areas previously implemented Voalte, including the Neonatal Intensive Care Unit about five years ago and mother and baby units throughout the Mary Horrigan Connors Center for Women and Newborns (CWN) last fall.

Renee Zaya, BSN, RN, said that the tool has made an immense difference in the day-to-day experience of nurses. “Voalte has been one of the biggest positive changes for communication on postpartum units in years,” she said.

Previously, with the paging system, nurses would spend a lot of time waiting for return calls from physicians and other staff not based on the postpartum units. “It’s almost like texting from your phone,” Zaya said. “These messages can save so much time in your day as a nurse that you can be spending with your patients instead of waiting at the phone for a call back.”

For example, when a patient is experiencing increased pain and requires a new medication order, nurses can message the physician, communicate back and forth, have the orders placed during the process and receive pharmacy approval quickly — all via Voalte.

“In the old system, we would have to page the doctor, wait for the call back, let the doctor know what we need and then wait for the orders,” said Zaya. “The result with Voalte is that the patient receives the medication more quickly, which is the most important thing — providing safe, quality patient care.”

For more information on Voalte, visit this page.