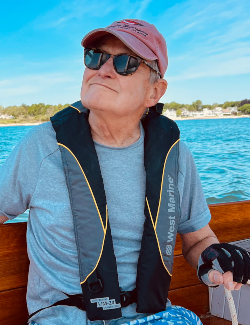 Brigham and Women’s Hospital mourns the loss of Robert Osteen, MD, a cancer surgeon and educator whose contributions to the field of surgical oncology influenced generations of surgeons. He died July 14 from complications following a recent injury. He was 81.

With a remarkable tenure spanning almost 50 years at the Brigham, Dr. Osteen established himself as a leading expert in surgery for tumors of the pancreas, liver, stomach, esophagus, colon, breast and other organs. Throughout his career, he served as an influential and beloved surgeon, teacher and mentor. Gifted with a sharp mind, colleagues frequently consulted Dr. Osteen for clinical guidance. Although he retired from clinical practice in 2006, he remained engaged in the instruction and mentorship of students and trainees.

“Bob Osteen had a huge presence at the Brigham and beyond,” shared David Brooks, MD, former director of Minimally Invasive Surgery and program director of the Advanced Minimally Invasive Fellowship. “Despite having long since stopped operating, he was at our Wednesday morning Morbidity and Mortality conference nearly every week, adding sage advice, challenging the residents and staff and generally providing wonderful gravitas to the meetings. His surgical wisdom was always valued. He will be greatly missed by all who knew him.”

Gerard M. Doherty, MD, surgeon-in-chief and Crowley Family Distinguished Chair of Surgery, reflected on the countless lives that Dr. Osteen touched over the course of his illustrious career.

“Few of us can hope to have the impact on those around us — co-workers, trainees, patients and others — that Dr. Robert Osteen had,” Doherty said.

Colleagues remembered Dr. Osteen not only as a great surgeon but also a great teacher — one who inspired others both personally and professionally with his guidance and wisdom. In recognition of his lasting influence on surgical education, the Department of Surgery established a Junior Faculty Fellowship Award in his honor in 2006.

“Dr. Osteen was one of our most respected and active teachers,” added Doherty. “After retiring from clinical practice a decade and a half ago, he patiently devoted himself to the work of teaching Harvard Medical students how to think through challenges in clinical surgery. Dr. Osteen brought his wry smile and gentle guidance to hundreds of students, always grounding them in basic principles and allowing them to work their way through the analyses. At his core, he cared about people and their lives — patients, students, trainees and colleagues — and he made us all better by his friendship and his mentorship.”

Monica Bertagnolli, MD, chief of the Division of Surgical Oncology, remembered Dr. Osteen as a generous mentor, teacher and friend.

“Bob Osteen was an extraordinary role model in every way,” Bertagnolli said. “He had a deep knowledge of the science of oncology. In the operating room, his command of technique was such that no motion was ever wasted. As a junior faculty member, I remember visiting him almost weekly carrying a pile of X-ray films, and he would patiently coach me through the management of my more challenging patients. Every one of his trainees hoped to achieve his level of excellence as a surgeon. It is devastating to hear of his passing. I am so very fortunate to count myself among his many trainees and colleagues.”

Brigham colleague Atul Gawande, MD, MPH, who trained under Dr. Osteen during his residency and is currently serving with the Biden-Harris administration to lead global health at United States Agency for International Development, reflected on the many ways Dr. Osteen touched his own life and career over several decades.

“Losing Bob Osteen is a devastating blow,” Gawande said. “Across almost three decades, I saw him in many roles — as the residency program director who welcomed my internship class, as a teacher in the OR and countless Friday pizza conferences, then as a wise colleague and reliable friend. He was the soul of Brigham surgery for an entire generation of trainees and faculty. He came to occupy a place inside each of us, shaping our ideas about what it means to be a master surgeon, a master teacher and, if you got to know him, a joyful human being.” Gawande also described his time with Dr. Osteen in this 2011 New Yorker article.

Dr. Osteen led a full life that extended far beyond the Brigham’s doors. “He knew how to live well — his keen wit, enthusiasm for life and joy in family and friends were readily apparent,” Bertagnolli remarked.

“He never forgot what is vital and special about the role surgeons have in people’s lives — nor how to leave room for a full and enthusiastic life beyond the hospital,” added Gawande.

In addition to his work with the Brigham, Dr. Osteen published a collection of poems, Zero to Five Knots and a Book (2021), and a history book, Festina Lente: Charting the Mediterranean 1814–1824 (2016). An avid reader, Dr. Osteen researched a range of topics from surgery in the World War II to King Philip’s War. He was also a devoted sailor, navigator and collector of antique maps.

“Outside the hospital, he was charm itself,” Brooks reflected. “A raconteur, singer, actor, poet, historian, sailor of considerable renown — he was a renaissance man who embodied so many things we all admire and aspire to be.”