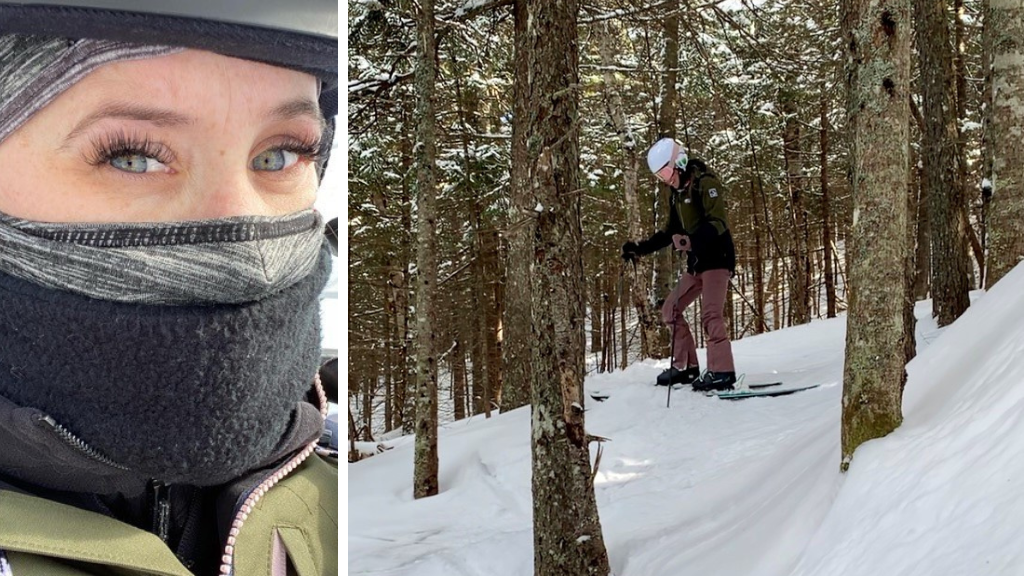 Kristen (Rousseau) Larochelle hits the ski slopes in her home state of Maine, a favorite hobby she can enjoy again after a lung transplant cured her of cystic fibrosis.

This past winter, Kristen (Rousseau) Larochelle felt the cold air tingle in her lungs as she inhaled deeply on a ski mountain in Maine for the first time in eight years. It felt good.

From birth, Larochelle had lived with cystic fibrosis, a genetic disorder that causes a person’s airways and lungs to become clogged with thick, sticky mucus. This constant buildup makes it difficult to breathe, and the gluey mucus easily traps bacteria, often resulting in regular lung infections. These complications can be life-threatening.

While some people with cystic fibrosis experience milder symptoms, Larochelle developed a severe form of the disease, including a complication that frequently caused her to cough up large amounts of blood.

By the time she reached her mid-20s, her health began to deteriorate. Although once a CrossFit enthusiast, she soon found herself requiring the use of supplemental oxygen for basic activities like grocery shopping. Cold air made it harder to breathe, which also meant giving up her beloved hobby of skiing. Even talking for an extended amount of time would leave her winded. She became reluctant to travel by plane, fearing she might die if her lungs started bleeding uncontrollably mid-flight.

“I was stuck at home pretty much all the time,” Larochelle recalled. “A lot of people I met didn’t even know what I like to do because they knew me as the person who likes to read books and all these things that involve just sitting there, and that’s not really me at all.”

That all changed for Larochelle in late 2018 when a dramatic series of events led to her hospitalization at the Brigham, where she received advanced care in the Thoracic Intensive Care Unit (ICU) to help manage her worsening symptoms until a set of donor lungs became available for transplant.

A Bridge to Transplant

Although Larochelle had been active on the national transplant waiting list since March 2018, it wasn’t until one morning that October that it became clear how urgently she would need a double lung transplant. 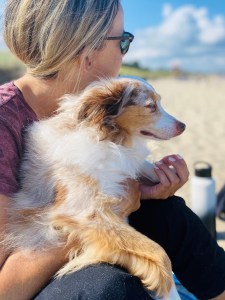 Larochelle enjoys a day at the beach with one of her dogs, Khloe.

“I woke up to my lungs bleeding. Within minutes, my bedroom looked like a murder scene,” she remembered.

She called 9-1-1 and was rushed to her local hospital in Maine. There, she learned that cystic fibrosis had severely damaged her lungs — to the point that there were now abnormal and dangerous connections between the blood vessels and airways. Recognizing that she required more advanced care, Larochelle’s providers arranged an ICU-to-ICU transfer to the Brigham.

Shortly after her arrival, Larochelle was placed on a ventilator through a tracheostomy. During one especially intense bleeding episode, her breathing tube became clogged with life-threatening blood clots.

Her body needed oxygen-rich blood. She would benefit from ECMO, a machine used to oxygenate the blood when a patient’s lungs are too sick to perform that function themselves. But there was a serious complicating factor: ECMO can’t be used when there is active bleeding in the lungs. That’s because a large dose of a blood thinner, heparin, is necessary when a patient is connected to an ECMO machine. Heparin increases the risk of bleeding.

After weighing the potential risks and benefits, her care team determined it was Larochelle’s only chance of survival. After injecting her with heparin, they successfully started ECMO, which Larochelle remained on for more than 40 days.

“What was special about Kristen’s case was she was one of the early examples of us using ECMO as a tool to bridge patients to transplant,” said Anthony Coppolino, MD, director of Ex Vivo Lung Perfusion in the Division of Thoracic Surgery. “She was basically on the highest-risk side of transplant that you could really consider.”

In addition to the physical toll her illness took on her body, being in the hospital for so long became emotionally draining, too, Larochelle said. Most of all, she missed her beloved dogs. To lift her spirits, members of her care team decorated her room with photos of her dogs. One nurse gave her a stuffed animal that resembled one of her pups.

“I would take him for walks around the floor. We’d put him on my walker and say, ‘Let’s take Austin for a walk,’” Larochelle remembered.

During that harrowing time, the warmth and compassion of her Brigham care team made all the difference.

“They became like family,” Larochelle said. “There were so many of them, each so special.”

Taylor Risotti, BSN, RN, one of her Thoracic ICU nurses, said Larochelle’s strength of will at 28 years old was humbling to witness.

“Seeing someone my age go through that — I look up to her,” Risotti said. “She was such a trooper. She did anything and everything to stay strong and get to the point of transplant.”

Finally, in November, Coppolino entered her hospital room with the news that there was a donor. While Larochelle and her family had been anxious to hear those words for more than a month, she also knew the weight they carried.

“It was what I’d been waiting for, but I just kept thinking someone lost their family member,” Larochelle said.

As she was being wheeled to the Operating Room, Larochelle said she was comforted by familiar faces from her Brigham team, including anesthesiologist Alissa Sodickson, MD, who did a FaceTime call with Larochelle from home right she before went under anesthesia.

From her initial admission to her local hospital in Maine, her transport to the Brigham and eventually her transfer to Spaulding Rehabilitation Hospital, Larochelle was hospitalized for a total of 113 days.

In January 2019, after a challenging recovery, Larochelle was finally able to go home. A year later, she sent a letter to her donor’s family to thank them for their lifesaving gift. They now talk regularly, and Larochelle visits when she can.

“They’re my heroes,” she said. “They made sure their son’s wishes were honored to donate life.”

Three years out, Kristen is back to skiing, traveling and walking her dogs — living the life she loves and not taking any moment for granted.

“Kristen had a fighting spirit from the moment I met her,” Coppolino said. “To see her persevere through that difficult course and to have the opportunity to help her get there is very gratifying. It makes what we do worth it.”

2 Responses to “After 113 Days of Hospitalization, Young Patient Grateful for Lifesaving Gift of Lung Transplant”