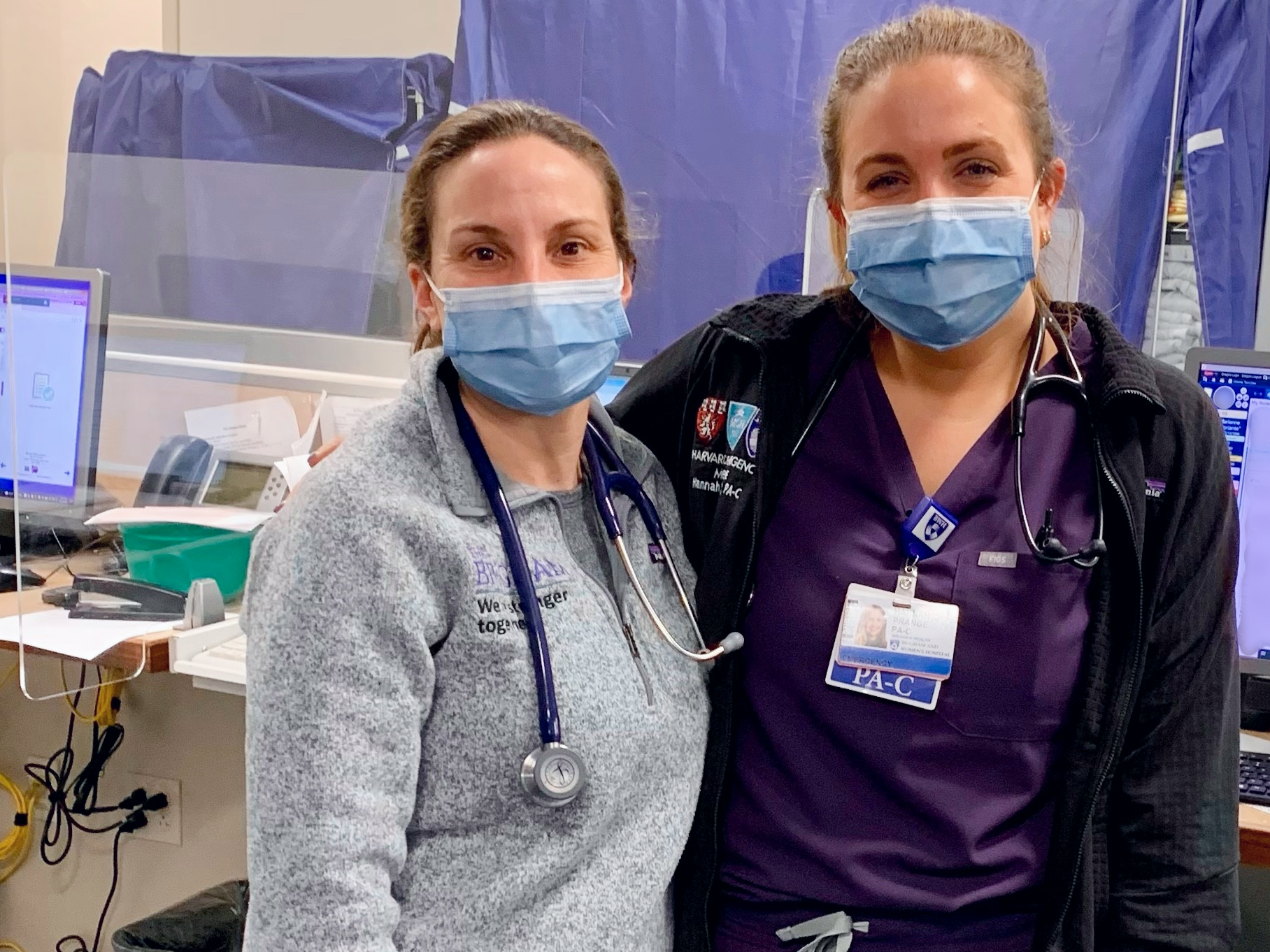 Hannah Prange (right) says she was thrilled to work alongside her longtime mentor, Donna Collins (left), during her first shift as a physician assistant at the Urgent Care Center in Foxborough, where Prange began her Brigham career as a medical scribe four years ago.

When Hannah Prange, MS, PA-C, was 2 years old, she carried a toy stethoscope and wore scrubs four sizes too big.

“I was one of those people who always knew what they wanted to do,” Prange said. As a child, one of her biggest role models was Heidi Handman, DO, her mother’s best friend and a neonatologist who, known to Prange as “Dr. Heidi,” inspired her to dream of pursuing a career in the medical field.

Those dreams would eventually lead her to the Brigham, where, after a chance encounter, she seized an opportunity to learn and grow with the support of colleagues and mentors.

Four years after she joined Brigham and Women’s Urgent Care Center in Foxborough as a medical scribe helping providers document information during patient visits, Prange recently began caring for her own patients as a physician assistant (PA) — in the very same clinic.

“There were times before and during PA school that were challenging for me, but I look back on my experiences, and I was really motivated and determined. Now I’m here full circle, and I feel like I have my dream job,” she said. “My colleagues really helped me get there.”

After graduating from PA school in 2019, Prange returned to the Brigham the following year as a PA in the Emergency Department (ED). As she gained experience, she expanded her rotation to other sites. Today, Prange works as a PA in both the Brigham and BWFH EDs, as well as the Foxborough Urgent Care Center where she started her career.

Prange’s colleagues said it has been inspiring to witness her professional growth over the years.

“There is nothing more rewarding than watching our employees grow and supporting them as they strive for the goals they have set for themselves,” said Julia Raymond, regional director of Ambulatory Operations, who previously served as Prange’s supervisor in her prior roles. “Hannah worked so hard to gain the right experience, learn from our providers and establish mentors who would help her along the way.”

As Prange became more focused on a health care career while she attended college, it was after graduation that she discovered her desire to become a PA. She met practicing PAs and was impressed by the care they provided and their ability to explore various fields of medicine. She also shadowed PAs at Dana-Farber Cancer Institute, and she later felt the personal significance of the care that a PA provided her mother following her cancer diagnosis.

Around that time, she happened to meet a Brigham doctor at the Patriot Place’s Dunkin’ Donuts. Prange gathered the courage to introduce herself and ask about medical scribe positions, and the doctor suggested she look at job openings at the Foxborough Urgent Care Center. A few months after becoming a scribe there, she sought more direct experience in patient care as a medical assistant, and her colleagues helped her train for the role.

According to Prange, the community she discovered at the Brigham inspired her to return as a PA.

“Working in health care can be difficult, but my co-workers and colleagues — the people — were supportive of my career path and have been a big part of why I’m happy at the Brigham,” she said.

Prange faced setbacks as she prepared for PA school, including rejection letters during her first round of applications, but she remained resolved. When she ultimately graduated from PA school, Prange was overjoyed at the accomplishment, though also nervous.

Donna Collins, PA-C, assistant medical director of the Foxborough Urgent Care Center, who mentored Prange through the process, says she never doubted that Prange would succeed.

“It has been a pleasure watching Hannah start as a young, eager scribe and then get hands-on experience as a medical assistant,” Collins said. “She is a quick study and hardworking.”

When Prange began her first shift as a PA at Foxborough Urgent Care, she was relieved to see a familiar face: Collins was working alongside her. “The fact that I still work with Donna is so special,” she reflected.

Moments like that helped her gain confidence and feel bolstered by a sense of community.

“Truly, I could not have done it without the other PAs who were training me,” Prange said.

Beginning Work as a PA

Between the lingering pandemic and continued high demand for health care services across the region, Prange acknowledged it has been a challenging time to begin her PA career. Yet, it has also been a learning opportunity and a humbling privilege to help so many patients, she added.

“My job is the most challenging thing in my life, but I love that challenge because I feel like every day I’m learning,” she said. “Even though some days are really hard, you go to work to save lives.”

Looking ahead, Prange hopes to continue expanding her skill set as a PA and to possibly explore other medical specialties — including obstetrics and gynecology, as she has long been interested in that field and recalls her passion for medicine started with Dr. Heidi.

4 Responses to “From Medical Scribe to Physician Assistant: Brigham PA Reflects on Her Journey to Patient Care”