Claire-Cecile Pierre (center) delivers an uplifting keynote address to SSJP’s graduating seniors and other attendees of the program’s virtual graduation ceremony on June 15.

For as long as he can remember, Devin O’Loughlin has been intrigued by his grandmother’s stories about nursing during World War II and the polio epidemic. Now, he looks forward to following in her footsteps as he graduates from Boston Latin Academy and prepares to enter nursing school — a milestone made possible in part by his participation in the Brigham’s Student Success Jobs Program (SSJP).

SSJP matches high school students, primarily from underserved Boston neighborhoods, with year-round paid internships in over 60 departments across the Brigham.

O’Loughlin, one of 26 seniors graduating from the program this year, was awarded a scholarship to study nursing at Wagner College. His experience working alongside and learning from Brigham nurses in the Department of Obstetrics and Gynecology inspired him to pursue his own career in the field. 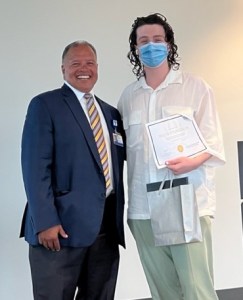 From left: Robert Higgins celebrates with Devin O’Loughlin at an event for SSJP graduates on June 27.

“Nurses are always in touch with their patients, and they’re caring,” O’Loughlin said. “That’s the kind of medical professional I want to be.”

O’Loughlin described OB-GYN as a welcoming place, one where he felt respected as a team member and empowered to grow.

“Everyone knew me, and I knew everyone,” he said. “The work environment just felt really healthy.”

SSJP students are paired with supervisors who serve as mentors, and the program further supports students by providing access to academic resources, including tutoring and college scholarships, as well as wellness services, such as mental health support.

“The program represents a long-term investment in improving patient care, as well as advancing the economic mobility of neighborhoods, families and communities,” said Pamela Audeh, program director of Youth Development and Economic Advancement in the Brigham’s Center for Community Health and Health Equity, which oversees SSJP.

“I had access to resources I didn’t think I would ever have,” said Frenkli Mitrushi, a graduating SSJP senior who interned with the Department of Pathology.

To celebrate students’ achievements, the program hosted a virtual graduation ceremony for seniors on June 15, featuring speeches from student leaders, such as Mitrushi, who, along with O’Loughlin, is a member of the SSJP Student Council. During the ceremony, graduates were reminded that support from their SSJP and BWH communities will continue beyond high school. Through the SSJP, students will have continued access to offer scholarships, internships, academic and mental health resources and support for entering the workforce and obtaining advanced degrees.

Mitrushi joined SSJP as a high school sophomore passionate about the sciences. In addition to the hands-on experience his internship has provided, he has enjoyed the opportunity to interact with SSJP peers and his Pathology colleagues, whether in an informal chat in the Garden Cafe or while learning more technical skills in the lab. His experience at the Brigham has inspired him to pursue the pre-med track at University of Massachusetts Boston, where he plans to study biology, with a goal of addressing health inequities.

Mitrushi’s interest in health care began when he and his family immigrated to the United States from Albania. He realized that despite the vast medical resources in the United States, health care remained inaccessible to many people, particularly in low-income communities. As a leader of the student council, he has facilitated many discussions on health equity, and he plans to be a leader in addressing health inequity throughout his future career. 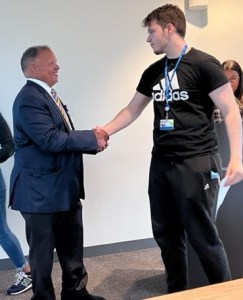 “I joined the student council to see if leadership was for me, and what I found was that it is,” he said.

The COVID-19 pandemic directly affected SSJP students, their families and their communities in many ways. Even while navigating their own personal challenges and traumas, many students felt inspired to contribute to the Brigham’s pandemic response and chose to work extra hours at testing sites, vaccine clinics and food-distribution sites — often aiding their own communities in the fight against COVID-19.

For Mitrushi and O’Loughlin, the pandemic brought the significance of patient care and equity into sharp focus. Mitrushi helped to facilitate student discussions on equity and the disproportionate effects of the pandemic on Black and brown communities in the United States. When internships returned after a hiatus in 2020, O’Loughlin supported the OB-GYN department, and Mitrushi assisted Pathology as the pandemic continued.

“I really took pride in my work,” Mitrushi said.

All SSJP students make crucial contributions to the hospital. “It’s really amazing to see. Our students are vital members of the Brigham community,” said Audeh.

For Mitrushi and O’Laughlin, what makes the program unique is its support for students and its community of peers.

“It’s great for making friends as well as networking, and it has so many opportunities for truly impacting your life,” said Mitrushi.