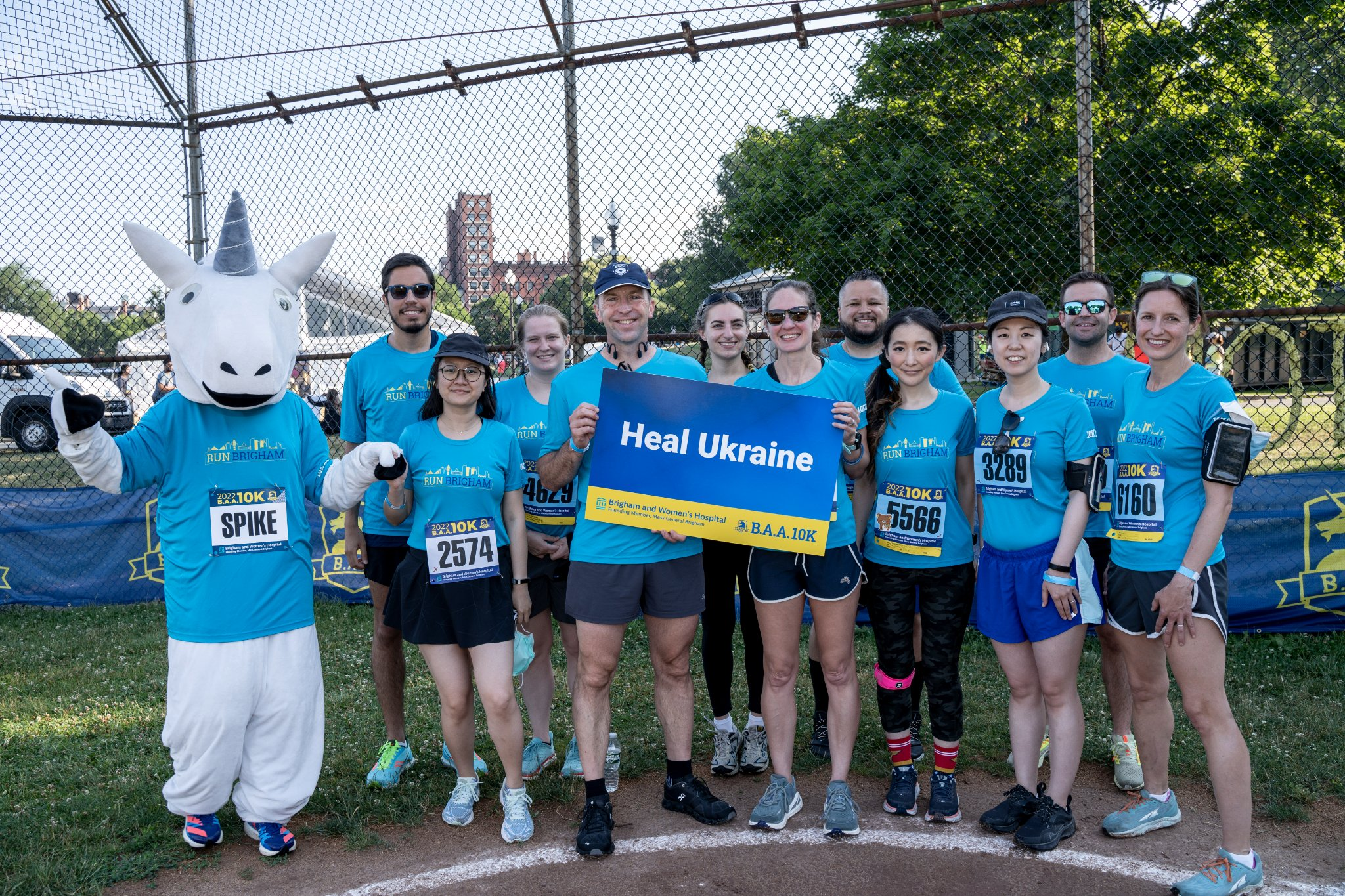 Heal Ukraine was one of 50 teams of Brigham staff members, patients, and supporters who participated in the B.A.A. 10K to raise funds for Brigham and Women’s Hospital.

More than 6,100 runners made a long-awaited return to the streets of Boston on Sunday, June 26, for the annual Boston Athletic Association (B.A.A.) 10K, presented by Brigham and Women’s Hospital, the race’s exclusive fundraising partner.

Runners braved hot, humid conditions to compete in the eagerly anticipated race, which marked its return from a three-year hiatus due to the pandemic. The event kicked off with a performance of the national anthem by Charlene C. Hollins, MSN, APRN, FNP-C, a nurse practitioner for Mass General Brigham Urgent Care and former nurse in the Brigham’s Emergency Department, and concluded with post-race stretching led by Brigham physical therapist Karen Lovely, PT, DPT, OCS.

This year, the Brigham welcomed 444 runners and 50 teams — including 266 Brigham employees — who participated either in person or virtually. Together they raised over $200,000 to fuel work at the Brigham that holds special meaning for them, and each had their own story of what brought them over the finish line.

Brigham neurologists Robert Mallery, MD, and Sashank Prasad, MD, co-captains of the newly formed Brainiacs team, ran to raise funds for the Ann Romney Center for Neurologic Diseases. They were inspired to support the work of their colleagues, who are researching treatments for Alzheimer’s, Parkinson’s and other serious neurologic diseases.

“We are excited to have a diverse team of physicians, nurses and trainees, and have been awed by the generosity of those who have made donations on our behalf,” Mallery said. 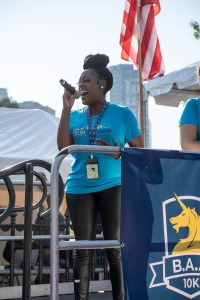 “Most of all, we are inspired by our patients and honored to participate in this event for them,” Prasad added.

The ongoing crisis in Ukraine inspired members of the Center for Surgery and Public Health (CSPH) to form the Heal Ukraine team. The team’s goal of supporting cancer and trauma care in Ukraine reflects the mission of the center, which, more broadly, seeks to advance the science of surgery through research that informs policy and program development for safe, high-quality and equitable, patient-centered care in the U.S. and around the world. Among the ways CSPH is supporting Ukraine is by offering consultations to the country’s physicians during this time.

Team co-captains Amanda Reich, PhD, MPH, and Robert Riviello, MD, MPH, participated in past races with colleagues, and both have a longtime love of running.

“Fundraising with the Brigham through the B.A.A. 10K offers the opportunity to combine our personal and professional interests,” Reich said.

“This year, we raised money to support work focused on translating physician- and patient-education resources into Ukrainian and facilitating peer-to-peer consultations for physicians in Ukraine, led by our colleague Dr. Nelya Melnitchouk,” Riviello added. “We were excited to run, work and fundraise together with our friends from CSPH on these shared goals.”

Interested in starting a team, joining an existing one or getting more involved in next year’s race? Sign up for email reminders here.