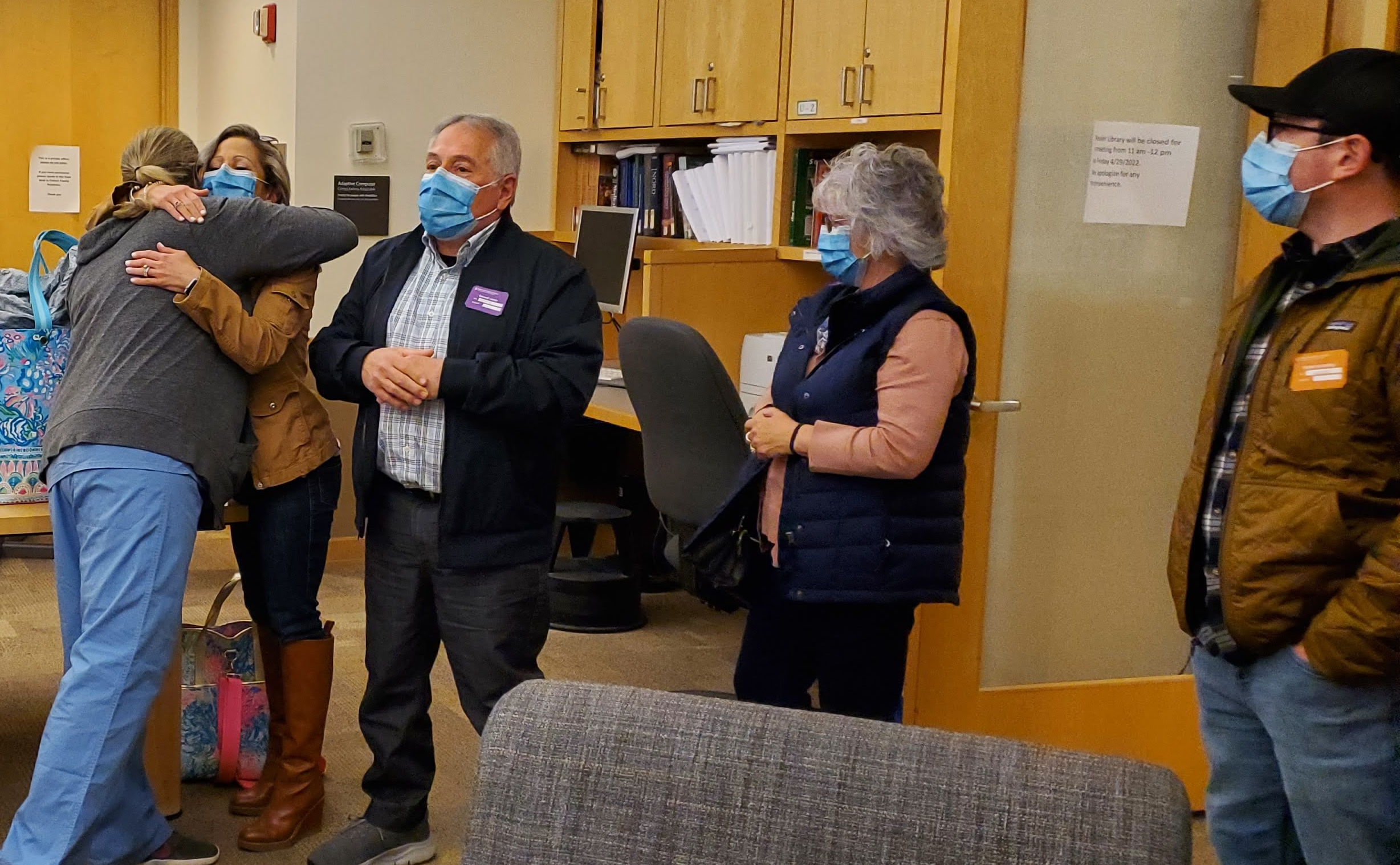 From left: Nurse Sarah Veader embraces Shannon Wilding during an emotional reunion with the team who cared for Wilding’s father, John Bosse (center), while he was hospitalized for COVID-19. Members of the family, including Bosse’s wife, Nancy (second from right), and son, Brad (far right), returned to express their gratitude for the outstanding care he received.

In celebration of Father’s Day, Brigham Bulletin is highlighting the touching story of a Brigham care team that rallied to support a Maine father and grandfather, along with his family, while saving his life from severe complications of COVID-19.

Are they brushing his teeth? Even though she had a hundred other things to worry about while her father was hospitalized for COVID-19 at the Brigham last fall, Shannon Wilding couldn’t get the question out of her mind.

Compared to everything else that her father, John Bosse, 65, had endured since getting sick, Wilding knew that her dad’s teeth were probably the least of his care team’s worries.

Shortly after his COVID-19 diagnosis last September, Bosse’s health sharply declined. His wife of 45 years, Nancy, brought him to the emergency room three times at two different hospitals near their home in Lewiston, Maine, when breathing became especially difficult for him. While receiving monoclonal antibody treatment during one visit at a local hospital, Bosse’s blood oxygen levels plummeted. He was admitted to the intensive care unit (ICU).

Bosse was sedated and intubated, and his health continued to deteriorate. His care team in Maine gently suggested the family prepare for the worst and say their goodbyes.

As doctors investigated transferring him to another medical center with greater resources, a family friend urged them to advocate for a hospital in Boston where more advanced care was available. Three days after his ICU admission, Bosse was transported by a Life Flight air ambulance to the Brigham, where he remained intubated under sedation for another 20 days in October and November.

During that time, Bosse’s family visited frequently and stayed in regular contact with his ICU care team on Braunwald Tower 8 — checking in daily, sometimes multiple times a day, to see how he was doing. Wilding, her brother, Brad, and their mother were anxious to learn the latest updates to his condition. How were his blood gases today? When might he be extubated?

But even with so many big concerns, Wilding found that the question about whether someone was brushing her dad’s teeth gnawed at her mind. In the end, it wasn’t only about preserving his dental hygiene — but also his dignity as a person, not just as a patient.

She spoke with one of his nurses, Sarah Veader, BSN, RN. Yes, of course they were brushing his teeth, Veader assured her.

“Dad was still intubated, with so many tubes coming out of his mouth. With no hesitation, Sarah brushed his teeth with confidence and ease,” Wilding remembered. “Rarely, I’m at a loss for words, but I was speechless. At that point, I had only known Sarah for a very short time, but in that moment I knew Dad was in the very best hands.”

Wilding held back tears as she reflected on that memory when she, her father and their family recently returned to the Brigham to thank members of their Tower 8 care team for their lifesaving care and outstanding compassion.

“Everything you guys did — it was like he was your dad, and that was overwhelming,” Wilding told staff during the emotional reunion in the Bretholtz Center for Patients and Families. “You treated us like he was your family.” 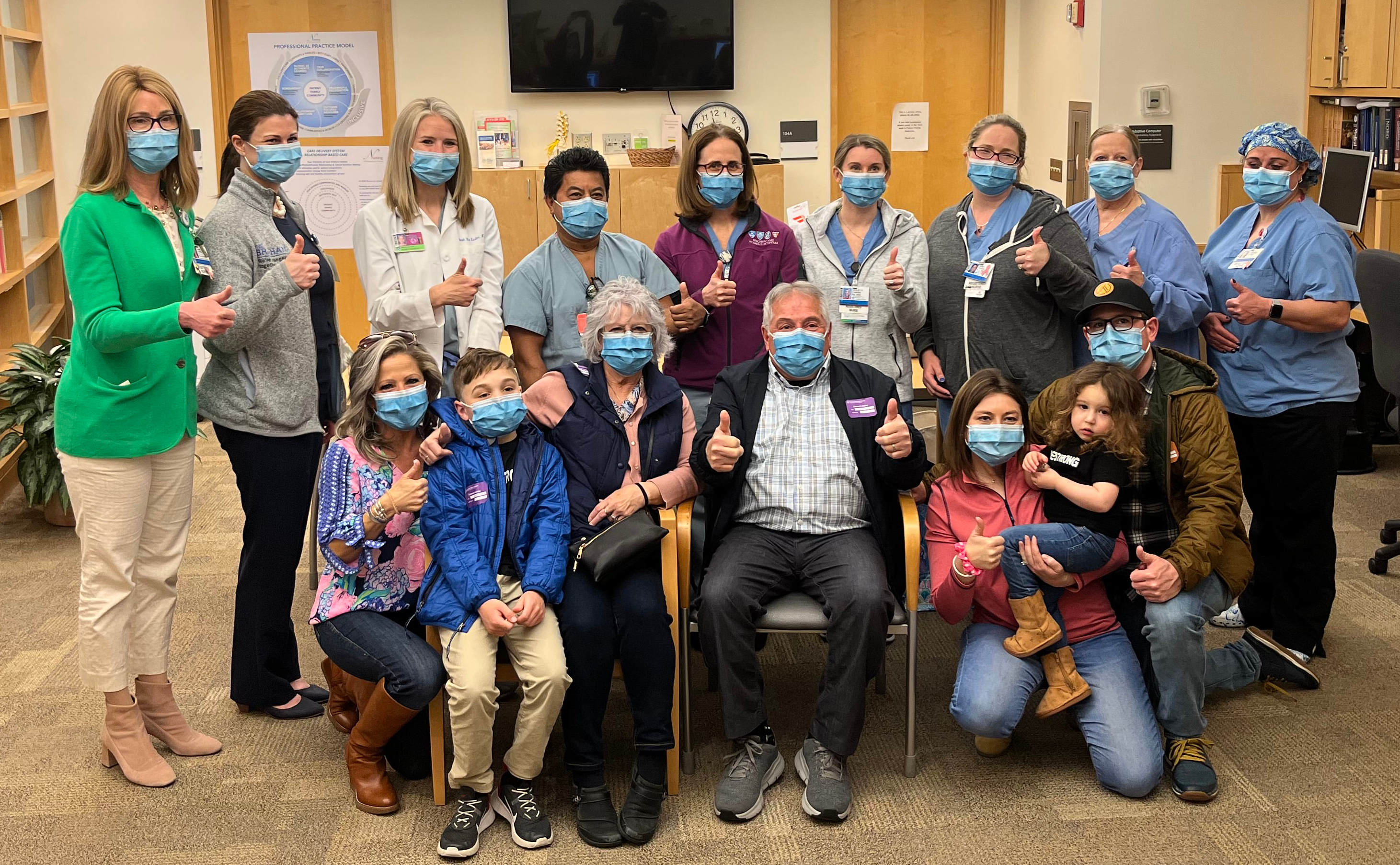 Bosse, his loved ones and several representatives from his Tower 8 care team celebrate his recovery.

Bosse was eventually discharged to an inpatient rehabilitation facility in Maine before returning home a few days before Christmas. Although he remembers almost nothing from his time in the hospital, Bosse said he and his family will never forget the extraordinary difference the Brigham made in their lives.

“It was not just the care I received. It was also the way the staff treated my family. They tear up every time they talk about it,” Bosse said. “I know there was a large team, and my family spoke highly about them all. They made this tough time more tolerable for them.”

‘You Do Make a Difference’

The severity of his illness was never lost on Bosse and his family.

“Whenever he sees the news about people in our own town who passed away, he says, ‘That could have been me,’” his wife said. 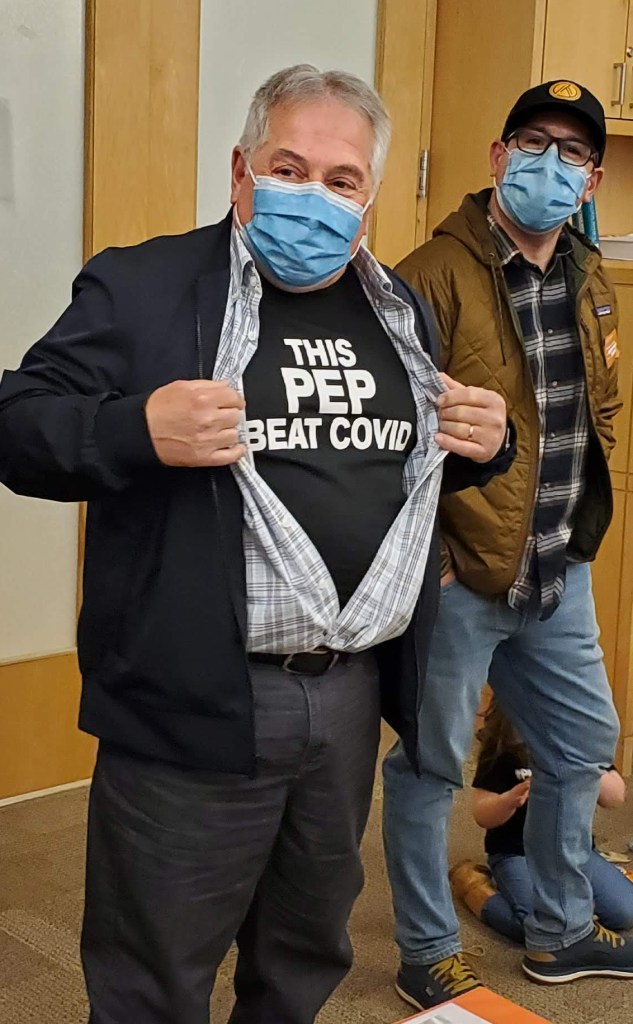 Bosse reveals a T-shirt his family made for him with the phrase “This Pep Beat COVID.” Pep is short for pépère, a French-Canadian term for grandfather that became Bosse’s nickname years ago. During his illness, “Pep Strong” became his family and community’s rallying cry.

Following his discharge from the Brigham, Bosse embarked on three weeks of inpatient physical, occupational and speech therapy at New England Rehabilitation Hospital in Portland to rebuild his strength. He transitioned to outpatient therapy, and earlier this year was walking with the help of leg braces, a walker or cane.

When he returned to the Brigham in April with his family to thank staff, he walked into the 75 Francis St. entrance with the help of just ankle and foot orthotics. Bosse shared with staff that he’s already back to doing what he loves, including golfing. In August, he plans to participate in a local 10K with his 10-year-old grandson, Conor. By September, he hopes to be back on ice skates to rejoin his hockey league.

“This is such a gift,” said Diane Tsitos, MSN, RN, nursing director for Tower 8, upon hearing all the progress Bosse has made since his discharge. “It really warms our hearts. This is why we do what we do.”

During their visit, the family showed their appreciation by distributing treats to staff and small cards with “The Starfish Story,” a parable about a man who picks up starfish stranded on the beach and returns them to the ocean — a tale to illustrate the influence one person can have on another.

“I am so grateful,” Bosse told the Tower 8 staff gathered in the Bretholtz Center. “Don’t give up on what you do. You do make a difference. It certainly has in our lives. We’re never going to forget.”

Attending intensivist Sarah Rae Easter, MD, emphasized the important role families play in caring for patients and thanked Bosse’s loved ones for their support as well.

One Response to “‘It Was Like He Was Your Dad’: Family Expresses Gratitude for Father’s Lifesaving, Compassionate Care”