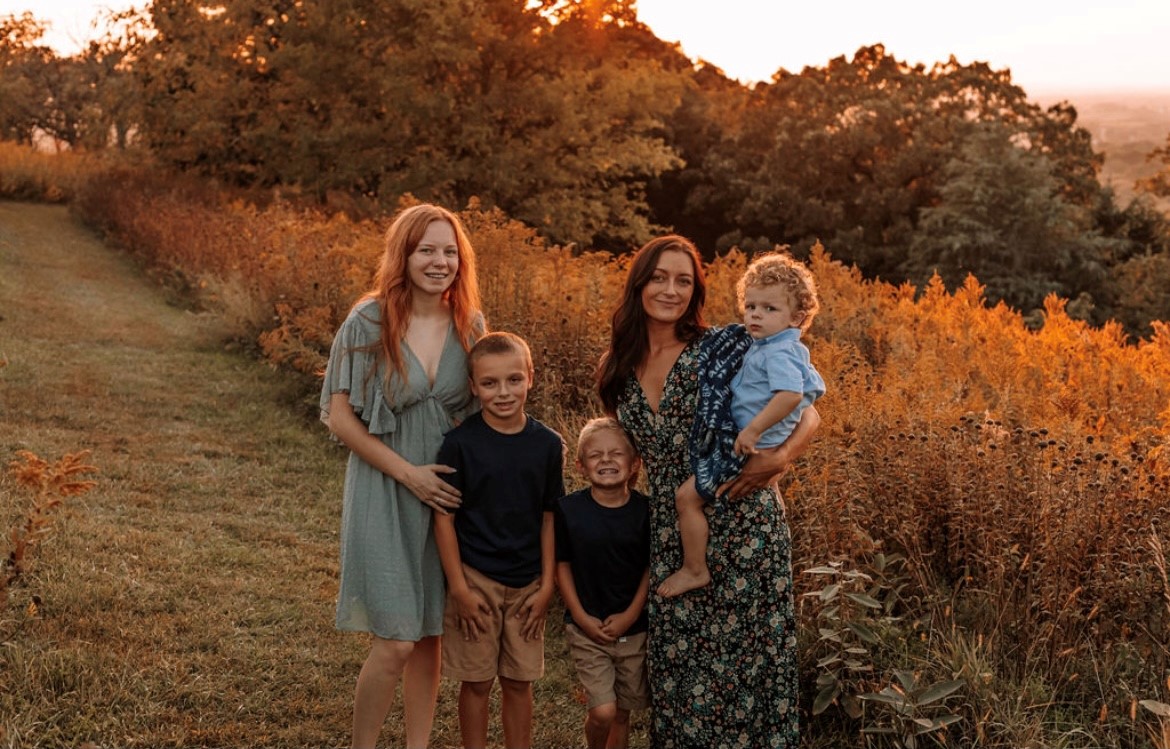 “They are the most important thing in my life,” Nicole Haight (second from right) says about her four children.

In celebration of Mother’s Day, Brigham Bulletin is highlighting how one mother’s unwavering devotion to her family set her on an extraordinary path to healing with the support of her Brigham care team.

The pulsing sound in Nicole Haight’s ears just kept getting louder. Whoosh. Whoosh. Whoosh. It was disorienting as she worked as a building painter, trying to maintain her balance on lifts and ladders. At home, the pulsing was eventually so loud that it nearly drowned out the sound of her youngest son’s cries.

Then came the crippling migraines. Haight, 29, had never experienced anything like them in her life. She saw a doctor near her home in Stockton, Ill. They thought it was a severe ear infection. It turned out to be something much worse.

After undergoing an MRI last June, Haight learned she had an arteriovenous malformation (AVM) in her brain. It’s a condition that causes capillaries — tiny blood vessels that connect veins and arteries — in the brain to form incorrectly. 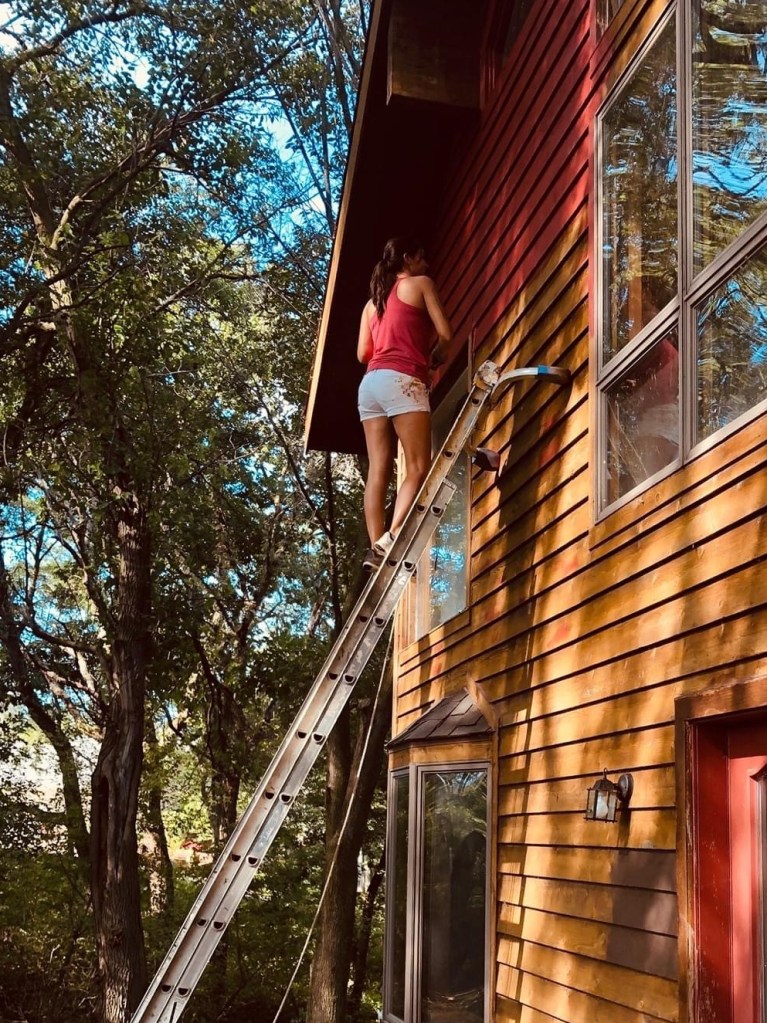 Haight at work prior to her diagnosis

“One of the best descriptions somebody gave me was that it’s like a bunch of Christmas lights tangled up,” Haight said.

In a healthy person, brain capillaries are like speed bumps on a busy road, preventing blood from flowing too quickly across these connections. In someone with an AVM, blood rushes from the artery into the vein — the source of that loud pulsing sound Haight was experiencing — and causes the vein to blow up like a balloon. At any time, the pressure buildup can cause the vein to burst without warning. If that happens, there is a 20 percent chance of death. Among those who survive, the risk of permanent injury to the brain is greater than 40 percent.

AVMs are rare, affecting one in 100,000 people, and congenital, meaning they are present from birth. They are the leading cause of hemorrhagic stroke in young people.

Haight, a single mother of four, says she wrestled with what this diagnosis meant for her and her family.

“I was so scared,” she said. “I even started a notebook and wrote notes to all my kids, just in case I wasn’t here.”

Determined to Find a Solution

Shortly after her diagnosis, Haight drove two and a half hours for consult with a neurosurgeon in Wisconsin. They told her that her AVM was inoperable and offered to treat it with radiation therapy — an approach that would offer a low likelihood of success and take six years to complete, a period during which her AVM could rupture at any time.

So, she saw another neurosurgeon. And another. And another. In all, she met with seven surgeons across the Midwest. They each told her the same thing: Surgery was just too risky due to the size and location of the AVM, which was in the area of her brain that controls speech. One hospital in Chicago agreed to perform an embolization, a treatment that stops blood flow in a targeted area. The procedure was unable to completely resolve her condition. 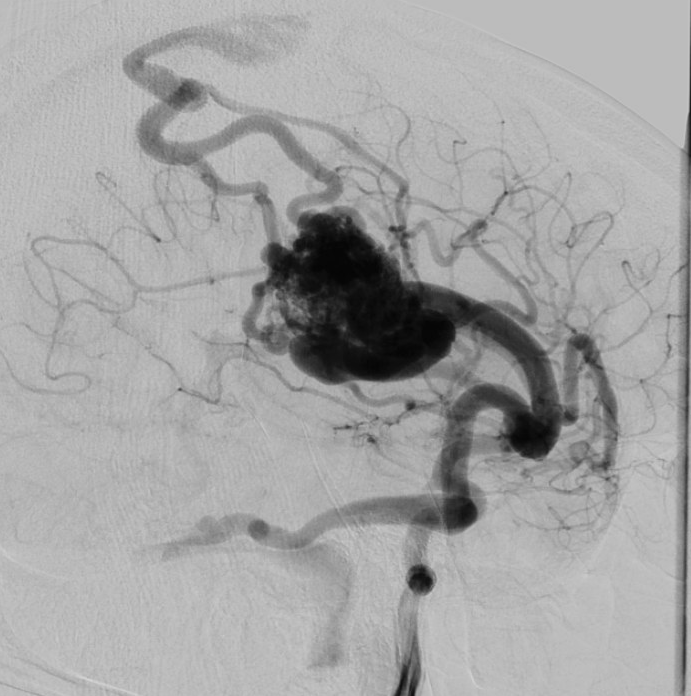 An image of Haight’s AVM, captured on a diagnostic angiogram, shows an artery going directly to a vein without intervening capillary.

It started to feel like her life was being taken over by researching doctors, scheduling appointments and traveling across states for consults — all while managing her worsening symptoms. But Haight says none of that compared to the heartbreak she experienced as she watched her children process what was happening.

“It was hard on my kids because I don’t think they fully understood why I was always so sick. That was the worst part,” she said. “My dad had passed a few years prior, and they asked if I was going to end up with their grandpa.”

Haight was determined not to let that happen — and thanks to a chance encounter, she became connected with the Brigham Neurosurgery team who refused to give up on her, too.

While at a house-painting job outside Chicago last year, Haight, her mother and her uncle — who all work together as part of a family business — got to chatting with their client and learned that his son was a Neurosurgery resident at the Brigham. After they shared her story, he offered to make an introduction.

That was how Haight met Nirav Patel, MD, director of the Brigham’s AVM Program and a global expert in treating complex AVMs. They scheduled a virtual visit, and Patel reviewed the scans from Haight’s latest MRIs.

Removing an AVM is a painstakingly slow, careful process. The entire surgery is performed under a microscope as Patel and his multidisciplinary team work to untangle and remove the malformed blood vessels, millimeter by millimeter — a process that takes up to 12 hours.

“We often see patients with high-grade AVMs who have been bounced around and told it is a ticking time bomb — that nothing can be done. But that isn’t always true. If we catch it and surgically remove it, it’s gone forever,” Patel explained. “For so much in neurosurgery, we don’t get a cure, no matter how good of a job we do. But this is one of those diseases where, with a great team and a lot of effort, we can cure these patients for life.”

Among hospitals in Boston, the Brigham stands out for performing the highest volume of AVM removals and taking on the most complex cases, Patel said. Over the course of his career, he has completed more than 100 of these surgeries and is passionate about ensuring patients worldwide have access to this lifesaving procedure.

For Patel, there was no question in his mind that he and his team could help Haight.

That was all Haight needed to hear. This February, she and her mother got into their pickup truck and made the 16-hour drive to Boston. She couldn’t fly, as the cabin pressure in a plane might have caused her AVM to rupture.

But before they could see Patel in his clinic, Haight was struck with severe migraines and went to the Brigham’s Emergency Department. Her care team there paged Patel, who met with Haight and her mother. The team prepped her for surgery.

After half a day in surgery, Haight was placed in a medically induced coma for seven days to help her body rest and heal. When she woke up, she only remembered one fact about her life: her four children. 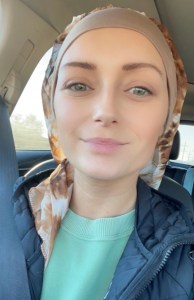 “I’m grateful for every little thing,” Haight says of life after her surgery.

“They are the most important thing in my life,” Haight said.

While it took some time to recover her speech and other fine-motor skills, Haight said all the symptoms of her AVM had vanished. Within a few days, she was eager to return home to her family and received the go-ahead from her care team to rejoin her mother in their pickup truck and head back home. Today, almost fully recovered, Haight is back at work and enjoying every moment with her loved ones. Her AVM is gone — permanently.

“I feel so free now,” she said. “I’m grateful for every little thing.”

Among the recipients of her gratitude are her Brigham care team, she added.

“I’ve never met staff who are so caring,” she said. “Dr. Patel is so different from any other doctor I’ve met. He smiles whenever he sees me. He genuinely cares. At one point, he said to me, ‘I will treat you as a whole person. I know you’re a mother. I know you have kids.’ I felt like to all the other doctors, I was just a case.”

Patel said he was not surprised to see Haight recover so quickly.

“She’s an unstoppable force,” he said. “Mothers always bounce back the best because they have that motivation. They are willing to do whatever it takes to be there for their kids.”