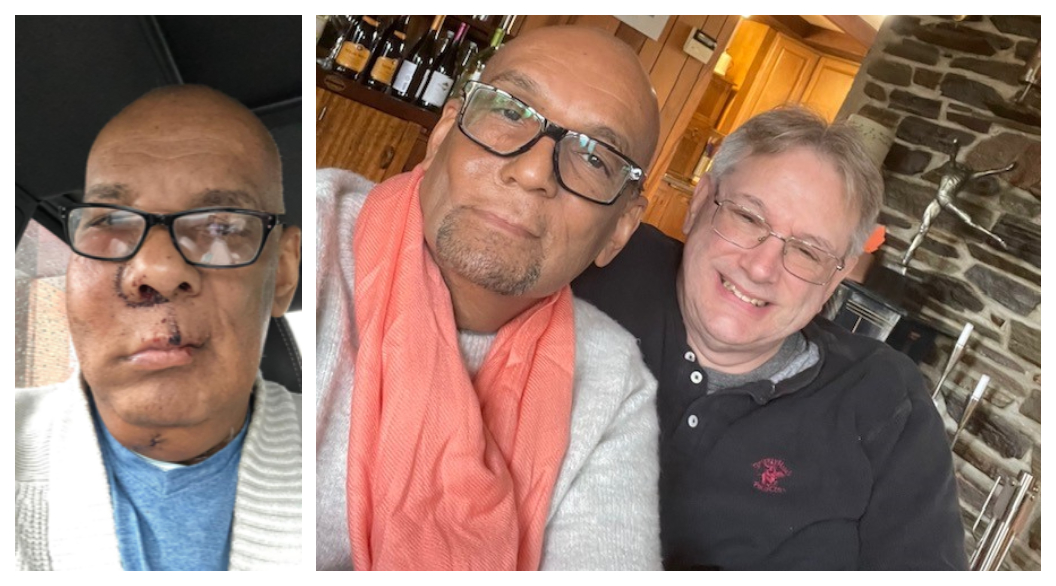 When Ira Santos started to find it difficult to breathe through his nose, he assumed allergies were to blame. But when his symptoms worsened and his face became swollen and painful, he knew something else was wrong.

Even so, nothing prepared Santos and his husband, Barry Macero, for the shocking revelation they received after Santos underwent a CT scan: It was cancer.

They learned Santos had developed squamous cell carcinoma — an aggressive form of skin cancer — in an uncommon location, including his sinuses, palate and the bottom of his eye socket. After consulting with a surgeon near their home in Peabody, Santos and Macero received another bombshell.

“They immediately told him he needed surgery, and they were going to remove his eye,” Macero recalled. “When we asked about alternative therapies and chemotherapy, they said it wouldn’t work.”

The prospect of losing an eye would be difficult for almost anyone to accept. But as a hairdresser, it would have been especially devastating for Santos, who relies so heavily on his vision to do his job well.

“I said to Ira, ‘How are you going to cut hair with one eye?’” Macero said.

They sought a second opinion at Dana-Farber Brigham Cancer Center. That decision saved Santos’ life — and his eye.

“We called and got an appointment right away, and when we came in, we were assigned a team of doctors,” Macero said. “The first thing they said was, ‘Before we do surgery, let’s see if we can reduce the size of the tumor with chemotherapy.’”

Several rounds of chemotherapy were somewhat effective in reducing the tumor size, but ultimately not enough to avoid surgery. However, the care team’s willingness to try a less-invasive treatment strategy — and their understanding of how important it was to preserve Santos’ eye, if possible — made the couple feel like they were in the best hands, they said.

“I can’t tell you how wonderful they were,” Macero said. “They made us feel included in all the decisions.”

‘It Was a Miracle’

Eleni Rettig, MD, of the Division of Otolaryngology-Head and Neck Surgery, who led the team that performed Santos’ surgery two years ago, said a multidisciplinary, patient- and family-centered approach is essential to achieving the best outcome for patients like Santos.

“Head and neck cancer in general is not very common, and because the treatment can have such an impact on your function, it’s ideal to be treated in a high-volume center that has experience with these tumors and the reconstruction,” Rettig said. “We treat patients as a team. We’re able to see them together in our clinic, which is unique and provides patients some comfort in knowing we collaborate so closely.”

In Santos’ case, because imaging showed the tumor had invaded the bottom of his eye socket, the team was uncertain whether the cancer had spread to the area directly around his eye, Rettig explained. They wouldn’t know for sure until he was in the Operating Room (OR) and Rettig had an opportunity to take a tissue sample from his periorbita — a fibrous capsule surrounding the eyeball — to see if cancer cells were present.

In addition, the surgery itself would be challenging, Rettig said. After removing the tumor, Rettig would need to reconstruct his cheekbone and eye socket using segments of bone from Santos’ leg, as well as skin from his leg to recreate his palate. The team used computer modeling in advance of the surgery to plan the reconstruction. Once in the OR, they transferred the bone and tissue and, finally, sewed the blood vessels together under a microscope.

“It’s one of the most complex surgeries we do,” Rettig said.

When a Pathology team reported back that the periorbita was cancer-free, Rettig said she breathed a sigh of relief. There was no need to remove Santos’ eye. After more than 12 hours in the OR, she called Macero to share the good news.

“She said, ‘I saved his eye and got 100 percent of the cancer,’” Macero remembered. “I started crying. I said, ‘Oh, my God. Thank you so much.’ It was a miracle that she saved his eye.”

Santos’ surgery took place in April 2020, just as the pandemic prompted the Brigham to implement restrictions on visitors. Despite all the uncertainty of that time, Santos and Macero said that staff who cared for him postoperatively made them feel cared for and connected to his loved ones.

“Ira used to rave about the nurses when he was there,” Macero said. “They encouraged him to call me as much as he wanted.”

After being discharged home, Santos underwent six weeks of radiation therapy with more chemotherapy to ensure all the cancer was eliminated. Today, Santos maintains a clean bill of health, and says he feels great and that his eyesight is just as good as it was before surgery.

“The recovery was very nice,” Santos said. “The doctor said that maybe I could go back to work in 10 months or one year, and I got back in three months.”

Macero said they are both incredibly grateful for the care they received.

“I can’t tell you how thankful I am for Dana-Farber and Brigham and Women’s,” Macero said. “They are amazing.”

One Response to “When Cancer Threatened to Take a Patient’s Eye, a Brigham Care Team Saved It — and Him”