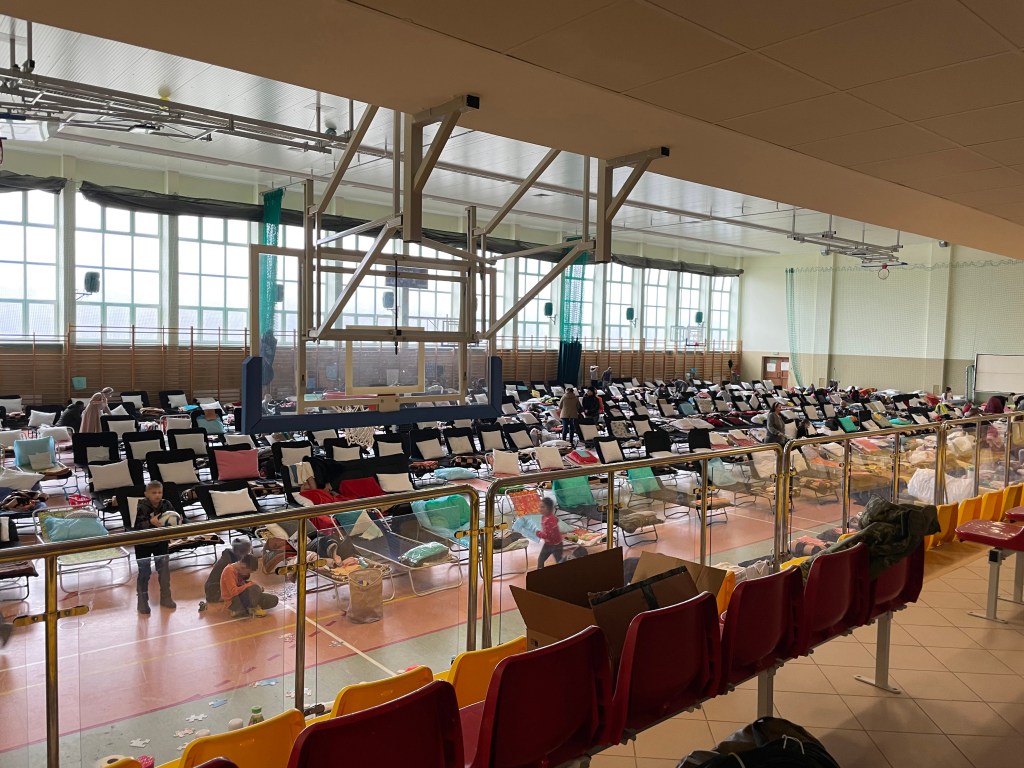 “Restoring health care that’s been interrupted is going to be one of the biggest tasks going forward,” says Global Emergency Medicine fellow Morgan Broccoli, MD, MPH, who shared the above photo from her recent travels to Poland, where she aided the humanitarian response for refugees fleeing Ukraine.

When emergency physician and Global Emergency Medicine fellow Morgan Broccoli, MD, MPH, landed in Poland earlier this month as part of a team assisting with the humanitarian response in Ukraine, she quickly saw how difficult it would be for responders to help those who needed it most.

“By far, the biggest challenges are safety and access. Those two things go hand in hand,” Broccoli said. “It’s very different than a natural disaster. With an earthquake, sometimes you get worried about aftershocks, but generally you can get into the place where people are the most injured and the need is greatest. But in an active conflict — in a war — it’s not safe to go to the spots where people have the most need. We’ve seen verified attacks on health care personnel and hospitals getting bombed.”

Broccoli, who returned to the U.S. this week, traveled to Poland with Team Rubicon, an international nonprofit that deploys military veterans and first responders to provide immediate relief in areas affected by natural disasters and humanitarian crises.

Working in collaboration with colleagues from the Polish Red Cross, the Polish government, the United Nations, the World Health Organization and other global responders, Broccoli and her team were tasked with evaluating medical needs both at the border and in Ukraine, with the goal of developing a coordinated crisis response.

“We got there pretty soon after the start of the war, and we were trying to figure out where the needs were prior to sending a full team of medical providers,” said Broccoli, who has previously deployed to Haiti with Team Rubicon.

Brigham colleague and emergency physician Erica Nelson, MD, MPhil, MS, who serves as deputy medical director of Team Rubicon, arrived in Ukraine this week to continue that work and assist as needed with the emergency medical response.

Unsurprisingly, Broccoli noted, the greatest need for acute medical aid is in areas of active conflict — primarily eastern Ukraine and, more recently, in the capital, Kyiv, where bombing has intensified in recent days. Yet those conditions are precisely what makes it so difficult, and dangerous, to deliver help.

“People are trapped and unable to get food or water, but it’s not safe to go there, so we decided to set up operations in Lviv, a city in western Ukraine, which has been a stopover point for internally displaced persons,” she said.

At the border with Poland, where an estimated 1.8 million Ukrainian refugees have come through since Russia launched its invasion on Feb. 20, Broccoli said the needs are different. People with chronic conditions, such as diabetes and high blood pressure, fled their homes without their medication — leaving the Polish government and aid organizations challenged with figuring out how to identify and support this vulnerable population.

“Restoring health care that’s been interrupted is going to be one of the biggest tasks going forward,” she said. “A lot of organizations are trying to figure that out and assess the burden. For instance, how many diabetics can we expect and how much insulin are we going to need? I don’t know that anyone has the answer to that right now.”

Reflecting on her experience at the border, Broccoli said she witnessed moments of humanity and heartbreak.

“I worry about the Ukrainian people. I wish that we were able to better help people in the cities that are under attack,” she said. “I think the most meaningful part of my time was seeing how welcoming and supportive the Polish people were. It’s challenging to have so many refugees pour into a country, and more are coming each day. But every person in Poland welcomed the refugees with open arms.”

Although this was her first time responding to a warzone, Broccoli said her training as an emergency physician — at the Brigham and beyond — prepared her for such an uncertain setting.

“I think that’s why a lot of emergency physicians are drawn to disaster and humanitarian response — we feel comfortable with the unknown,” she said. “Prior to coming to Brigham, I did not have much training or background in humanitarian response. The Brigham’s Global Emergency Medicine division and Harvard Humanitarian Institute are both leaders in these areas, so I have been able to learn about everything that goes into responding to a crisis of this size from leaders in the field.”