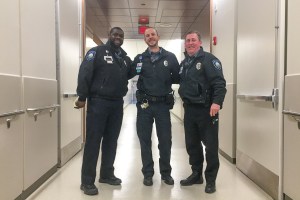 Over the past few years, numerous departments across the Brigham have stepped up to continuously meet arising challenges in our community, and the Police, Security and Commuter Services department has been no exception.

The pandemic has created additional security needs throughout the hospital and despite this, the team has worked tirelessly to address every emerging challenge. Recently, the Police, Security and Commuter Services played a critical role in the Brigham’s response to coinciding events: protests of the COVID-19 vaccine requirement for solid organ transplant patients, and the presence of a neo-Nazi group that targeted researchers leading work to ensure every patient receives equitable care.

Word of this complex situation quickly spread throughout the Boston area and beyond. As a result, departments across the hospital received threatening phone and electronic messages from the public. While there were no credible threats to the safety and security of the organization, the team added seven posts to their standard staffing areas, screened all hospital entrances, identified the most vulnerable areas and then placed extra patrols in those spots to enhance protection.

“We worked with the Emergency Preparedness and Patient Quality and Safety teams to evaluate any risks,” said Kevin Slattery, director of Policy, Security and Commuter Services. “The teams audited every call made to the hospital and shared their findings with Security.”

Soon after the first protest occurred, the team learned that a second, larger protest was planned for the following week.

In addition to ramping up security measures, informing the Brigham community of what was happening and mitigating the spread of false information became one of the team’s top priorities. They worked with the Office of Strategic Communication to ensure the workforce received accurate, real-time information regarding all current events.

“We also rounded so we could speak directly with employees about their concerns and staff our patrols accordingly,” said Slattery.

Additionally, the team collaborated with Human Resources and the Employee Assistance Program to make sure employees had all of the resources they needed. Beyond that, they offered additional services to staff who are concerned about their safety. 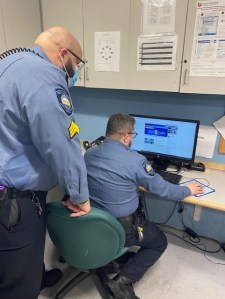 “We provide safety planning, so if an employee feels threatened or unsafe, they can sit down with our community service officers and design personalized safety plans,” noted Slattery.

Increasing security initiatives across the hospital was not an easy feat, and it required staff to work overtime, often planning into the night and picking up extra shifts.

“I’m proud that our officers, supervisors and lieutenants worked around the clock to protect our community,” stated Slattery. “Many of them came in on their own time to ensure the hospital was safe.”

While playing a critical role in the Brigham’s crisis response efforts, the Police, Security and Commuter Services team did not act alone. Their colleagues at Mass General Brigham supported them in emergency preparedness planning. Together, the teams went through various exercises to proactively troubleshoot potential problems, and generated response plans for all stakeholders.

“The Mass General Brigham Security Council provided crucial support throughout this process,” said Slattery. “They have a Special Response Team and that extra help was invaluable.”

In reflecting on the past few weeks’ events, Slattery recognizes that team efforts go a long way in times of crisis.

“Moving forward, no incident will be completely the same. But this experience has shown us that we can all count on each other,” said Slattery. “Our team is honored to support the Brigham and the great care our staff provides every day.”

One Response to “Shoutout to Security: Recognizing a Frontline Team’s Efforts to Protect the Brigham Community”