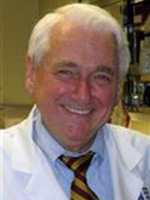 All are welcome to share condolences and memories of Dr. Welch in the comments section below the story.

The Brigham community mourns the loss of William R. Welch, MD, a surgical pathologist in the Department of Pathology, who died on Feb. 15. He was 79-years-old.

A member of the Brigham community for 42 years, Dr. Welch served as a staff surgical pathologist, practicing gynecologic and genitourinary Pathology. He was also a consultant staff pathologist at the Dana-Farber Cancer Institute and an associate professor of Pathology at Harvard Medical School.

“Bill was known around the world for his expertise in pathology,” said Fred Bieber, PhD, of the Department of Pathology. “He had an attention to detail for even the smallest lesions that could impact patient care and a large following of pathologists outside of the hospital who would regularly send him their cases.”

Ever passionate about pathology, Dr. Welch was an outstanding physician, scientist and mentor to many. Known for his patience as an educator and commitment to setting a high professional standard, he worked with a multitude of pathology residents and left an ongoing legacy.

“Bill was a trusted and skilled teacher, often letting medical students listen to his own abnormal lungs to teach respiratory physiology. He was also a consummate jokester and an incredible role model to everyone at the Brigham. He was humble, sincere, generous and caring,” said Joel Katz, MD, director of the Internal Medicine Residency Program and a physician in the Department of Medicine. Katz also cared for Dr. Welch throughout his illness.

While a dedicated leader, Dr. Welch is remembered by his colleagues for reasons far beyond his work ethic. Close friends recall his humor, his passion for operating his ham radio and his ability to connect with people across the globe.

“He had a tremendous sense of humor; he was always full of jokes,” said Bieber. “If you wanted a joke, you’d go to Bill. You’d be sitting with him at the microscope, and he’d get a phone call. It’d be someone calling from Australia or San Diego telling him a joke.”

Dr. Welch’s impact spread far and wide. He was a close friend to many and he consistently went out of his way to help anyone that needed it.

“Bill was timeless. He was older than many of us by a few decades and yet could be a colleague and a friend. He expected excellence in your work, but then on the side he treated everyone the same,” explained Michelle Hirsch, MD, PhD, associate pathologist in the Department of Pathology. “There was not a person who came through the Pathology Department that was not impacted by Bill. Everybody walked away saying, ‘It was great to work with Bill Welch.’”

Across the Department of Pathology, Dr. Welch is widely remembered for his positivity and unwavering curiosity. Colleagues recall that he even approached his own illness with intellectual interest, optimism and good spirits. Bill had a unique ability to engage with everyone in the medical community.

“I referred to Bill as the ‘Mayor of the Brigham’ because he characteristically struck up hallway conversations with staff of every stripe and flavor, going out of his way to assist patients in need along the way,” said Katz.

Dr. Welch also brought great pride to his work, often inviting family and friends to his lab to explain the complex medical problems he was aiming to solve. While those close to him admit they understood little of what he explained, they’ll never forget the passion Dr. Welch brought to his work.

“Bill was a dear friend to so many of our staff, including me, and his antics and genuine kindness will be missed,” said Katz

Exceeding his attention to his work was that to his wife, Laurel Welch, RN, a nurse he met at the Brigham in 1984. They married in 1995 and maintained a loving relationship.