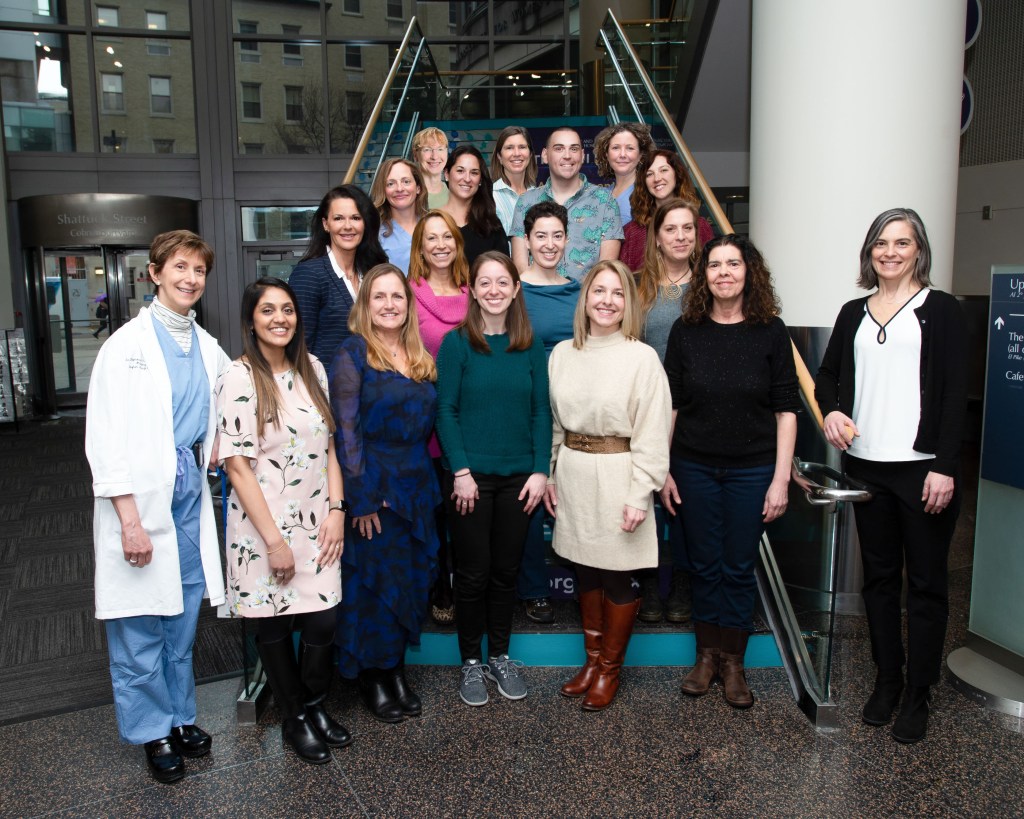 In February of 2020, the Brigham Midwifery Group posed for a group photo.

Among the health care professionals that make up a care team, midwives play an essential role in many patients’ pregnancies. In fact, Certified Nurse Midwives (CNMs) attended 17 percent of Massachusetts births in 2021. Midwives are trained medical professionals who support pregnancy, labor, delivery and post-partum processes. They practice independently, see their own patients and collaborate and consult with physicians as needed.

According to a report from the 2022 Massachusetts Health Policy Commission, hospitals with higher rates of midwifery care had better care outcomes, shorter inpatient stays, lower rates of cesarian sections (c-sections) and less spending on maternity care.

As part of the oldest midwifery program in Massachusetts, the Brigham midwives provide inclusive care to ten clinics across the Boston area.

The team is well regarded by the diverse patient populations they serve, including individuals of color and immigrants, who may have a history of experiencing racial disparities in the medical system.

Many providers have also sought specialized training to meet the diverse needs of the populations they serve. Glynnis Gracia, MS, CNM, a midwife at the Southern Jamaica Plain Health Center, is currently taking classes to create trauma-informed care plans for her patients. Most staff on the team also speak Spanish to communicate with their patients in their native language.

“Informing our patients on how to access resources in their own language adds an extra level of comfort to them and improves the care they receive,” said Margot Stone-Condry, CNM, a midwife in the Department of Obstetrics and Gynecology.

A Commitment to Care 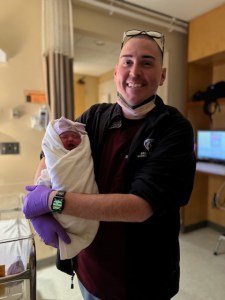 Matt Medina, MSN, CNM, C-EFM, holds Maddie Sullivan, the daughter of Lindsay Sullivan, RN, a Labor and Delivery nurse at the Brigham, shortly after assisting with her birth.

Mari Ramirez is far more familiar to the Brigham than most patients, having worked here for several years in clinical research after finishing her undergraduate degree in Clinical Psychology and Neuroscience.

As a clinical research professional, Ramirez has been following the topic of maternal care and racial disparities in perinatal health for nearly fifteen years. When she learned that she was expecting her marriage’s first child, Ramirez knew she preferred midwifery care. Midwifery and holistic health are a normal part of her culture and were a natural part of her upbringing.

“I have family from the Americas, Africa and the Middle East, where midwifery and holistic health are very common, in my experience,” said Ramirez. “Their holistic focus was very important to me.”

When it came time to deliver her firstborn child, she knew that the Brigham would be a good fit for her, especially because of the work that former Brigham clinician Audra Meadows, MD, published and the well-regarded midwifery team.

“Because of all my years working here, the Brigham is like a second home to me,” said Ramirez.

While generally healthy, Ramirez had an experience with a suspected but unconfirmed deep vein thrombosis (DVT) decades ago, a condition that results in the formation of blood clots, pain and swelling in the legs. Given her background in clinical research and familiarity with this topic, she reviewed the literature and turned to the Brigham’s obstetrics team for guidance.

After reading Meadows’s paper on racial disparities in maternal care, Ramirez sought her out as her obstetrician at the Brigham to explore potential pregnancy risks. Working with a hematologist, Dr. Meadows cleared Ramirez for care with the Brigham’s midwives. She then met the midwifery team, including Matt Medina, MSN, CNM, C-EFM, and Julie Patel, CNM, midwives in the Department of Obstetrics and Gynecology, who developed a care plan.

Ramirez continued to meet with her care team throughout her pregnancy. They consistently addressed physical needs and any other factors affecting her health, referring her to physical therapy, pregnancy-safe yoga and other supportive assistance.

“The entire care team at the Brigham cared for me as a whole individual, which led to better health outcomes,” said Ramirez.

‘They Advocated For Every Aspect of My Health’

After going into labor and arriving at the Brigham, her labor progress stalled. Sensing Ramirez’s stress, Medina cleared the room of individuals who were not playing a supportive role in the labor process. Shortly after, Ramirez’s labor began to proceed again.

“The Midwifery team may have saved my life, especially Matt, as he was such a capable and caring provider,” explained Ramirez. “Their respect and continuous guidance for me as their patient were invaluable.”

During the birthing process, the medical team suggested Ramirez consider a c-section due to the baby’s positioning. However, Medina knew that Ramirez preferred a vaginal birth if possible and took another route. He worked with Ramirez’s care team to first determine the baby’s location, then used his skillset to alter her baby’s positioning, which ultimately allowed Ramirez to avoid a c-section.

“My health outcomes were far more favorable for me having a vaginal birth than a c-section,” explained Ramirez. “The entire midwifery team was attentive to that and ultimately allowed me to have a natural birth.”

After a long labor, Ramirez gave birth to a healthy baby girl, who is now nearly two years old. As she reflects on her pregnancy, she attributes much of her success to her midwifery team at the Brigham.

“Matt and the midwifery team were instrumental in supporting the birth of my daughter. They supported me through a challenging time in my life and advocated for every aspect of my health,” said Ramirez. “They were truly dedicated to ensuring I had as successful of a birthing process as possible.”

Click here to find out more about the Brigham Midwifery Group or to schedule an appointment.

One Response to “Brigham Midwives Making an Impact”