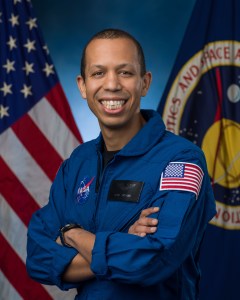 Longtime Brigham scientist and clinician, Christopher Williams, PhD, is headed to space. On what seemed to be an ordinary day, Williams had just finished dropping his daughter off at daycare when he received a call from an unknown number. Williams was floored to be greeted by the Chief of the NASA Astronaut Office with special news: he’d been selected as 1 of 10 members, out of 12,000 applicants, to join the 2021 NASA Astronaut Candidate Class.

As far back as he can recall, Williams has been fascinated by space. In fact, it’s what inspired him to become a physicist in the first place. Williams has dreamt of becoming an astronaut since he was a child and held this ambition close to him throughout his career. However, it was only after applying to NASA that he began to see a path for this dream to become a reality.

“As a kid, neither of my parents nor anybody in my immediate family was in science. But as far back as I can remember, I dreamt of becoming a scientist and an astronaut,” said Williams. “I was fascinated by the idea that we can use science to solve challenging, seemingly impossible problems. I feel privileged that I can help use my knowledge of science and physics to help patients fight cancer and this is something that NASA’s space program inspired me to do.”

Williams graduated from Stanford University with a bachelor’s degree in physics. He then pursued a PhD in physics at the Massachusetts Institute of Technology with a research focus in astrophysics. As a board-certified medical physicist, he completed his residency training at Harvard Medical School before joining the Brigham as a clinical physicist and researcher in the Department of Radiation Oncology.

“We are thrilled that Chris has joined join the 2021 NASA Astronaut Candidate Class,” said Daphne Haas-Kogan, MD, chair of the Department of Radiation Oncology. “We always knew that Chris would change the world for the better. His brilliance, insightfulness, and collegiality are out of this world in more ways than one.”

While being an astronaut and scientist are objectively different career paths, Chris recognizes key attributes he’s gained as a scientist that will allow him to succeed at NASA.

“I think my experience at the Brigham has set a great foundation for what I’ll be doing as an astronaut. At the Brigham, I lead a very tight-knit and multidisciplinary team of radiation therapists, physicians, physicists and nurses in radiation oncology. We all work together in a high-stakes environment to deliver radiation to our patients. So, I see a lot of parallels in that experience and the types of teams I’ll be working on at NASA.”

Williams is set to leave the Brigham on December 17th and begin his space training this coming January. He’ll spend the next two years in basic training and then become eligible for various flight assignments, such as conducting research at the International Space Station. While his time at Brigham will soon come to an end, his passion and commitment for solving scientific problems have only grown stronger. He hopes to weave his scientific pursuits and clinical expertise into his career at NASA.

“I’m excited about all the things I can learn at NASA, not only about physics and astronomy, but also medicine and the human body. Going beyond Earth’s orbit, I’d love to gain a better understanding of space radiation and how we can better protect ourselves against that.”