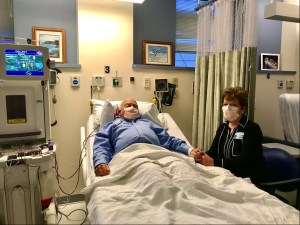 Joseph Thibodeau is no stranger to adversity. After overcoming stage four lymphoma, battling graft-versus-host disease and later, having both his legs amputated due to an infection, Thibodeau has discovered firsthand the value of resilience.

Equally important, however, are the blood transfusions he has been receiving for the past ten years.

Thibodeau is one of millions of Americans whose health depends on regular blood donations. In the wake of the COVID-19 pandemic, blood donorship has decreased by 10 percent and is at the lowest it has been since 2015, according to the American Red Cross.

“We need to get the word out about how dire the need is and also help people understand that donating blood is a very safe and well-tolerated procedure,” said Maureen Achebe, MD, MPH, clinical director of Hematology for the Dana-Farber Brigham Cancer Center.

Thibodeau’s story is testimony to the fact that even the most active, self-sufficient people can find themselves in need of blood donations. After working as a banker for 20 years and running a mom-and-pop convenient store with his wife, Kathleen, Thibodeau retired to raise beef cattle on the 150 acres of land the couple owns in Vermont. Only shortly after this, however, Thibodeau was diagnosed with lymphoma and began undergoing treatment in 2003.

When the lymphoma relapsed for the third time in 2011, Thibodeau was referred to Philippe Armand, MD, PhD, an oncologist at the Brigham, who determined that Thibodeau would need a stem cell transplant to survive.

While the transplant cured Thibodeau’s lymphoma, it also led him to develop graft-versus-host disease, or GVHD, an auto-immune disease in which a donor’s cells attack the recipient’s cells.

To combat the effects of GVHD, Thibodeau began receiving regular blood transfusions at the Kraft Family Blood Donor Center. At first, Kathleen passed the time waiting by reading or going for a walk outside. Then, it occurred to her: she, too, had the power to make a difference in someone’s life.

“I thought, ‘You know what, I really want to donate,’” she said.

“It’s very important that people donate blood,” said Thibodeau. “It would help so many people out—not just people with cancer, but people who were in car accidents or people with low blood counts.”

Achebe said that the pandemic has created an upsurge of medical problems, making the need for blood even greater. The fear of contracting or spreading COVID-19 drove many people away from donating blood; the problem, she said, is that most of these regular donors have still not returned, despite it now being safe to do so.

“You don’t think to do it until you know someone who needs it,” Thibodeau said.

Today, he continues to visit the Kraft Family Blood Donor Center once every two weeks, where he undergoes photopheresis, a blood-filtering procedure that he began receiving in 2017.

Some would be discouraged by the recurring four-hour drive from their home in Vermont to the Brigham. The Thibodeaus, however, continue to look for the silver lining in every situation.

To break up the long drive to the hospital, Kathleen said they spend the night at their son’s home in Princeton, Mass., where he lives with his wife and two children on a horse farm.

“They are the delight of our life,” said Kathleen.

Now, Thibodeau can play with his grandchildren and do yard work with his tractor, using his prosthetic legs. He said the ongoing treatments and his family’s support give him strength.

“It doesn’t keep him down,” said Kathleen. “We just go forward.”