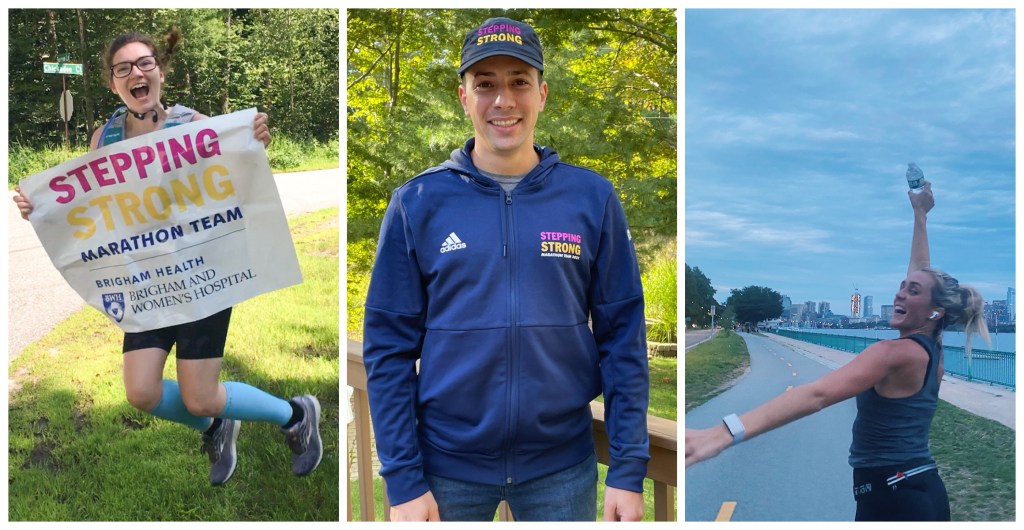 In celebration of the 125th Boston Marathon, Brigham Bulletin is highlighting the stories of three members of the Brigham’s Stepping Strong Marathon Team. Comprising more than 100 runners, the Stepping Strong team will follow the historic Boston Marathon route on Oct. 11 for the in-person race or complete a virtual marathon, completing a 26.2-mile route of their choice Oct. 8–10 — all in support of The Gillian Reny Stepping Strong Center for Trauma Innovation at the Brigham.

Established nearly eight years ago, The Gillian Reny Stepping Strong Center for Trauma Innovation has evolved from one family’s bold response to a personal tragedy to a thriving, multi-institutional, multidisciplinary hub that is transforming the continuum of trauma care — from prevention to treatment to rehabilitation — for civilians and military heroes who endure traumatic injuries and events. You can advance this critical work by supporting the Stepping Strong Marathon Team. Click here to meet members of the team or make a gift. Learn more about the center at BWHSteppingStrong.org.

Daughter of Ewing Amputee: ‘My Mom Inspires Me to Keep Going’

When Meghan Jerome, 22, attempted her first half-marathon a few years ago, she hit a point familiar to many long-distance runners: pure exhaustion. 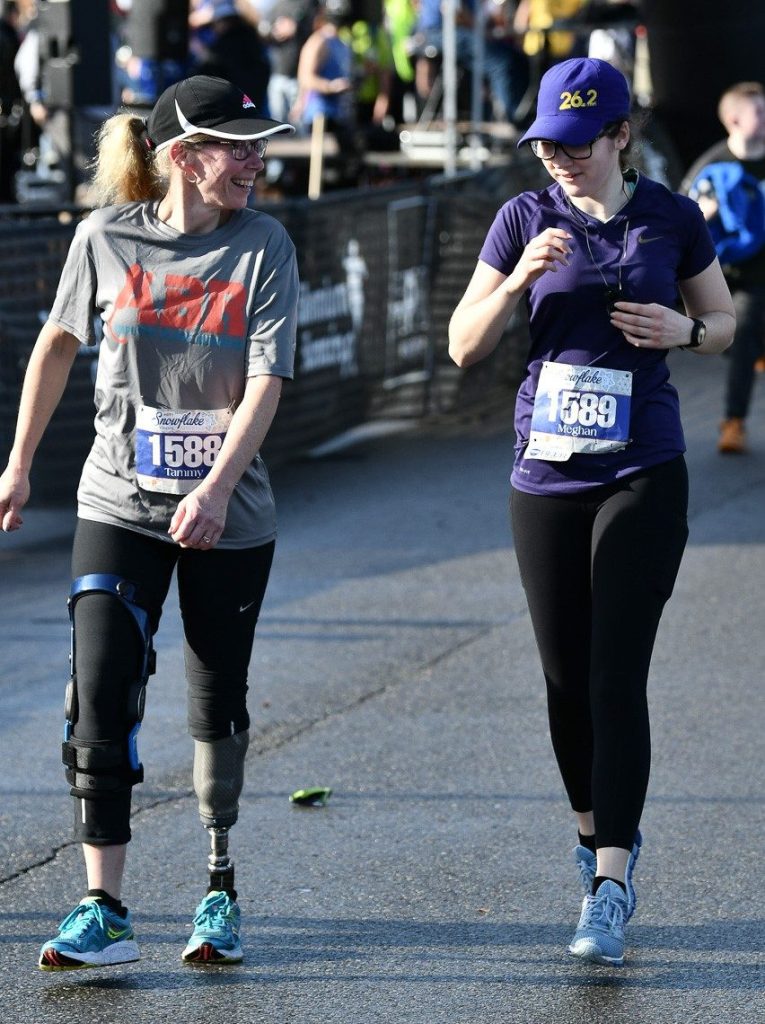 From left: Tammy and Meghan Jerome compete in the 2020 Snowflake Shuffle 5K in New Hampshire.

As her legs went heavy and her pace slowed down, a thought popped into her mind: “It doesn’t matter how fast you are. It matters who you’re strong for.”

It became her mantra.

There was no question for Jerome, a kindergarten teacher from Bedford, N.H., about who would inspire her to rally her strength that day and complete the race: her mother, Tammy, who underwent the Ewing amputation at the Brigham in 2017 after living with chronic pain and infections in her left ankle for years. Since the amputation, Tammy has used a robotic prosthetic capable of acting like a natural limb to get back on her feet and resume her active lifestyle, including running and skiing.

Now, as Jerome prepares to complete a virtual Boston Marathon in Londonderry, N.H., on Oct. 9, that mantra is still fresh in her mind — as is her mother’s perseverance and optimism.

“My mom inspires me to keep going. Thinking about her and her experiences, I’ve been able to understand how fortunate I am to be able to run,” Jerome said. “It’s hard. It pushes my body to the limit. Growing up, I never loved running, and even now, thinking that I’m going to run 26.2 miles is insane to me. But knowing that I can physically do it is not something I take for granted.”

For Jerome, completing a virtual Boston Marathon is less about the race itself and more about the cause she and her family are so passionate about: supporting the Stepping Strong Center for Trauma Innovation.

“Running for Stepping Strong is an incredible experience because it’s an opportunity to give back to an organization that has given so much to us,” Jerome said. It’s changed our lives. It’s given my mom hope to get out there, be active again and live life to its fullest. They really took us in as part of their family.”

And while Jerome is currently focused on this upcoming race, she already has her next goal in mind: running a Boston Marathon with her mom by her side.

Jonathan Custodio, 33, woke up in the Brigham’s Neuroscience Intensive Care Unit (ICU) last year with little to no memory of what had just happened. His care team explained that he had experienced an aneurysm in his spinal artery — an exceedingly rare, sudden and life-threatening event. He had arrived at the Brigham via MedFlight and was rushed into emergency surgery.

Custodio’s doctor gently explained to him that he might never walk again. He struggled to comprehend what he had just heard as he realized he felt no sensation below his diaphragm.

“I don’t know if it immediately sank in, but you hear that news and don’t fully understand the vastness of how it’s going to change your life until days, weeks and months later,” said Custodio, a software engineer from Barnstable. “I was scared. There was a lot of uncertainty.” 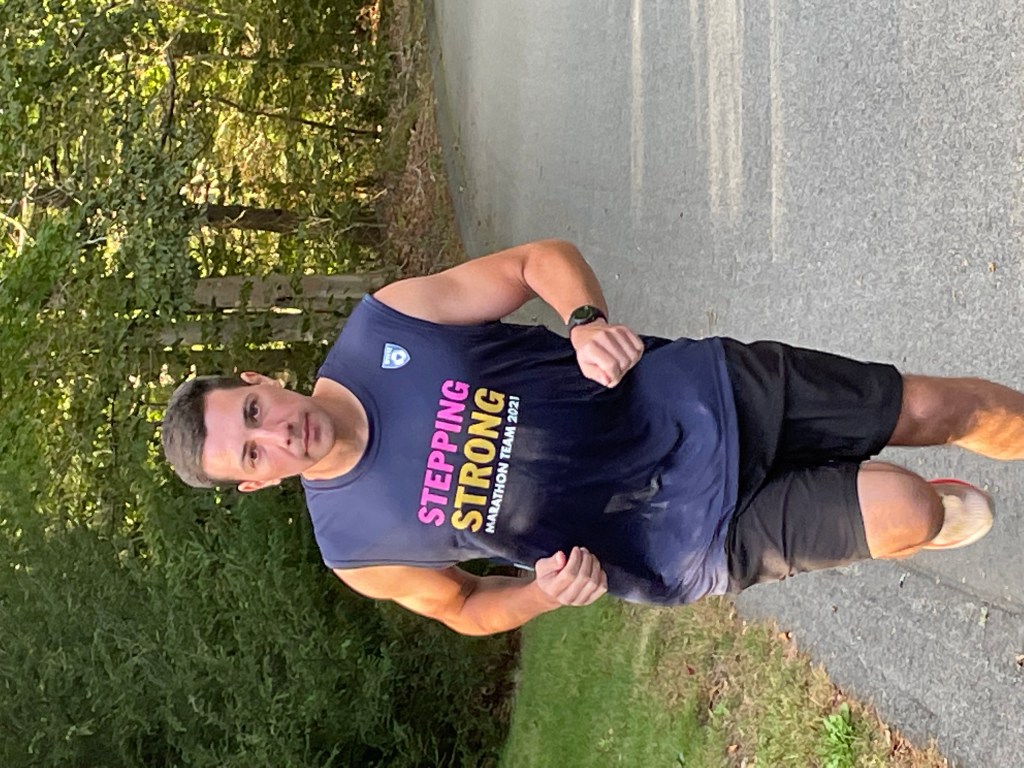 That sense of looming despair was soon eased by the compassionate care he received at the Brigham while he recovered.

“What I really remember from those moments is the kindness of my nurses and doctors. They kept me at peace, and I was able to stay positive in those first few days in the ICU,” Custodio said. “The nurses, in particular, were just wonderful. They were more than nurses in that moment — they were caregivers.”

Because he was hospitalized during the height of the COVID-19 pandemic, the hospital’s visitor policy at the time meant that Custodio could not have his family and friends by his side.

“Those nurses stood in for the family and emotional support that I needed,” Custodio recalled. “For them, I know it was a normal day at work, but for me it was the worst days of my life — and they were there for me.”

One of his nurses, Lisa D’Amore, RN, mentioned that she was a runner on the Stepping Strong Marathon Team. While the idea of walking, let alone running a marathon, seemed like an impossibility at the time, Custodio said that conversation planted an idea in his head.

“I thought, if I ever get better, I’m going to run the marathon for these nurses,” he said.

Through the hard work of rehabilitation, Custodio regained his strength and function — graduating from moving to walking to, yes, running. As soon as he could, he applied to the Stepping Strong team and will participate in the in-person Boston Marathon on Oct. 11.

“After you get discharged from the hospital, you go off and live your life, and the people who cared for you have no idea what happens,” he said. “I would love for my nurses and doctors to know that all their hard work — and all they went through with COVID — made a massive difference for me. It’s my way of thanking them and showing that hope is a critical component of healing.”

‘A Nurse Knelt Down Beside Me and Said, “I’m Going to Be with You the Whole Time”’

A few years ago, Emily Dugan said she made the ill-fated decision to stop taking medication she had been prescribed to control the complex partial seizures she had been experiencing due to a small lesion in her brain.

She was feeling fine, after all, and thought that maybe the symptoms she previously had weren’t even seizures. 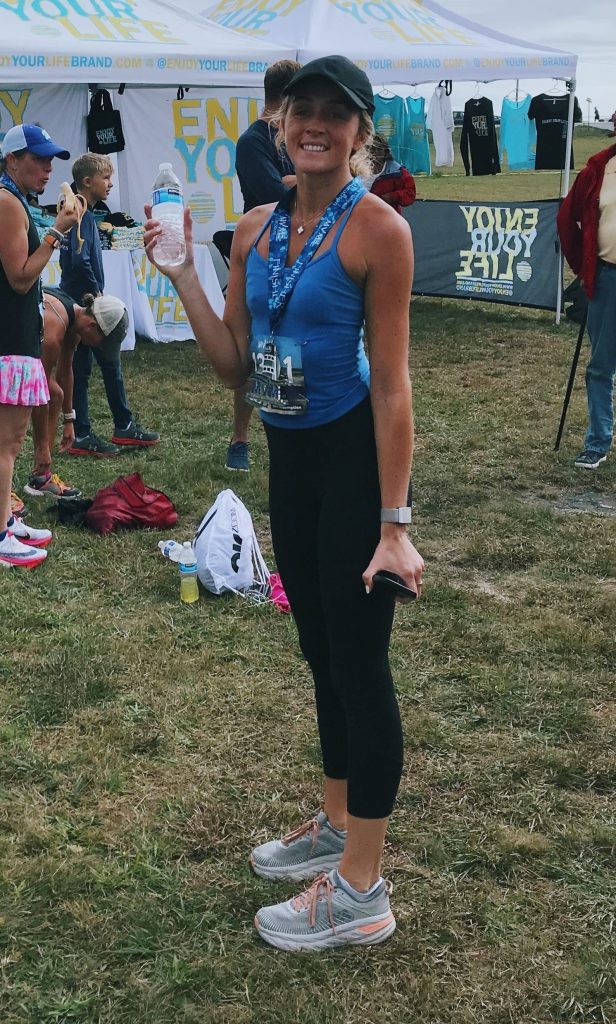 That choice had terrifying consequences after Dugan went for a run with a friend on the Esplanade last year.

While driving home, Dugan suddenly felt uneasy. She experienced a familiar, dream-like “aura” — a feeling that used to occur before her partial seizures.

She started to slow down and pull over. Within seconds, she began seizing. Her car struck a telephone pole. A bystander called 911, and Dugan was rushed to a nearby emergency room before being transferred to the Brigham.

Dugan, now 24, and her family first learned about the growth in her brain six years prior. Then, it was about the size of a pea, and initially she didn’t experience any symptoms besides headaches, which doctors weren’t even sure could be attributed to the lesion. Specialists she was seeing near her Rhode Island home were comfortable with the family’s decision at that time to simply monitor the growth.

By the time of her incident last year, however, the situation had changed dramatically.

“That was a turning point in all of this,” said Dugan, an investor relations professional living in South Boston. “My doctors said surgery was the next step because this lesion had grown significantly and was now causing full-blown seizures.”

Dugan first spent a week at the Brigham undergoing electroencephalogram (EEG) testing — which detects electrical activity in the brain using a web of electrodes attached to the scalp — so that her care team could observe the nature of her seizures in a safe, controlled environment. She then met with Brigham neurosurgeon Linda Bi, MD, PhD, and was deeply impressed with her expertise and compassion.

“This was such an overwhelming experience, and I felt comfortable with Dr. Bi from the moment we met,” she said.

Dugan decided to proceed with the 12-hour surgery last November. Due to COVID-related visitor restrictions at the hospital at the time, her family could not accompany her to the pre-operative area.

“It was terrifying. Brain surgery is probably one of the most invasive things a person can go through,” she said. “But I remember — and it even makes me tear up now — laying in the area before I was going into the Operating Room, and a nurse knelt down beside me and said, ‘I’m going to be with you the whole time.’ It was the motherly presence I needed.”

Dugan was discharged two days later and made a promise to herself — that she would run the Boston Marathon to thank her care team. On Oct. 11, she will fulfill that promise by competing in the in-person marathon as a member of the Stepping Strong Marathon Team.

“I was overwhelmed with gratitude when I got home from the hospital,” she said. “I also wanted to prove to myself — after everything I’ve been through over the past six years — that if you set your mind to something, you can do it. I want to prove to myself that I can cross that finish line.”