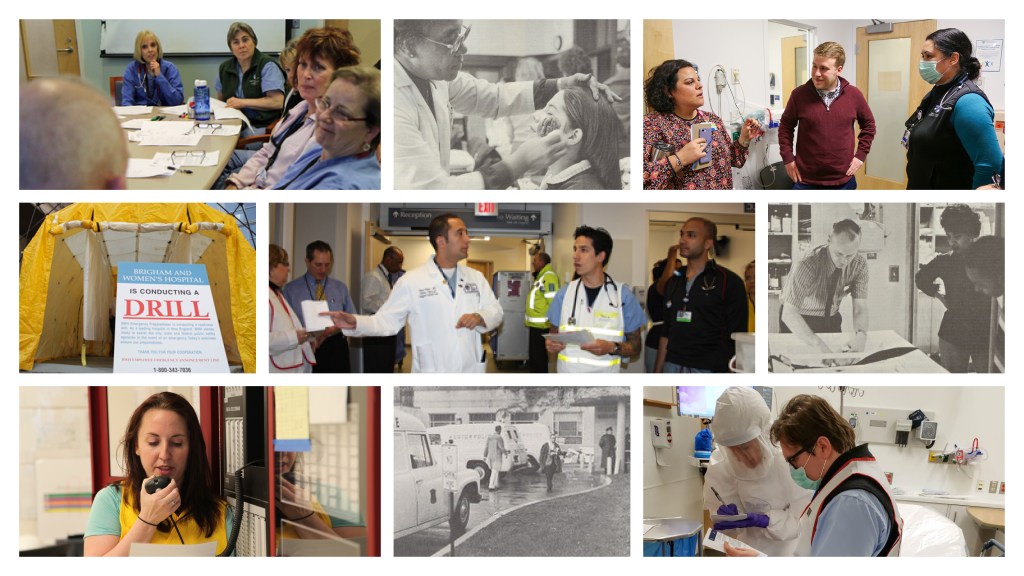 Just two weeks after the Cuban Missile Crisis de-escalated in October 1962, staff at the Peter Bent Brigham Hospital — one of the predecessor institutions of Brigham and Women’s Hospital — hosted a mock disaster drill to simulate staff response to a mass-casualty event.

“Despite the fact that it had been three years since the last disaster drill, the efficiency of all the hospital personnel in deploying themselves and carrying out their duties was noteworthy,” the Brigham Bulletin reported at the time. “Even with the visiting Press Corps almost blocking the entrance way to the Emergency Ward, all ‘casualties’ were cared for in the triage unit within 20 minutes of their arrival.”

While the U.S. avoided disaster during the Cold War, the outcome would be different nearly 40 years later, when terrorists hijacked four commercial planes and launched a series of devastating terrorist attacks on Sept. 11, 2001.

The 9/11 attacks spurred a nationwide effort to strengthen and standardize public health emergency preparedness, with hospitals around the country — including the Brigham — developing new infrastructure to meet modern threats when the federal Hospital Preparedness Program launched in 2002.

“9/11 really changed the face of health care preparedness in our nation,” said Goralnick, who in June transitioned to the roles of medical director of the Brigham Access Center and medical director of Network Development for the Department of Emergency Medicine. “When we’re in crisis, emergency management professionals are at the heart of it — acting as facilitators and working with departments and divisions across the enterprise to help solve problems. We’re always here.”

“COVID has highlighted the importance of using the expertise of the system to support preparedness and response efforts, and it has helped us refine our processes for patient surge and develop our High Consequence Infectious Disease plans,” said Goldberg, who also serves as medical director of Emergency Medical Services for Emergency Medicine. “But more than anything, COVID has helped bring our system together in its focus on emergency preparedness. Sharing successes, failures and lessons learned at the system level has made us stronger and better equipped to respond at the local level.”

In the wake of 9/11, hospitals began collaborating directly with public safety organizations — including police, fire and government officials — to prepare for bioterrorism attacks on civilians and natural disasters. Until then, these entities often did not coordinate until a disaster occurred, creating logistical challenges while in the throes of an emergency.

“We work with the Boston Healthcare Preparedness Coalition around load balancing patients so that no one hospital is disproportionately affected during a disaster,” Goralnick said. “The coalition continues to be the unit that we collaborate with during or in anticipation of any sort of event, whether it’s a snowstorm or a pandemic.”

As ensuing high-profile disasters and mass-casualty events around the country highlighted new vulnerabilities — from Hurricane Katrina in 2005 to the H1N1 swine flu pandemic in 2009 — the Brigham team continued to refine and evolve its infrastructure to be ready for potential threats.

The strong foundation of training, citywide coordination and in-house planning the Emergency Preparedness team built up over the years helped the Brigham maintain its operations while navigating several disasters over the past decade, including the 2013 Boston Marathon bombings, the 2015 fatal shooting of Michael J. Davidson, MD, and, most recently, the COVID-19 pandemic.

“Our team has a deep background in emergency preparedness, and we continue to work toward a system-level readiness paradigm,” Goldberg said. “We take an inclusive and multidisciplinary approach to emergency preparedness and lean on the expertise of our rich tapestry of content experts. Recent examples include the expertise of some of the nation’s most recognized infectious disease leaders to help us respond to the COVID-19 epidemic.”

More recent innovations the team has adopted include the creation of the Brigham’s First Response and Assessment Team (FRAT), which rapidly brings together leaders from various departments to coordinate an emergency response for events ranging from a burst pipe to an IS outage to an armed intruder event.

In 2018, the team also spearheaded the transition from color emergency codes to plain language codes, which greatly reduce the risk of “code confusion” among staff while also providing untrained individuals, such as patients and visitors, with clear information about how to avoid potential danger.

Brendan Russell, executive director of Emergency Medicine and Emergency Preparedness, said the team’s partnerships with colleagues across the institution are essential to its effectiveness. In addition to achieving consistent participation on emergency response calls from multiple areas — including Ambulatory Services, the Department of Quality and Safety, Engineering, Environmental Affairs, Health Physics, Information Services, Infection Control, the Office of Strategic Communication, Nursing Administration, Police and Security, and Research Management — the team works with representatives from across the Brigham who serve on its Emergency Preparedness committee.

“Whether it is 9 a.m. on a Tuesday or 3 a.m. on a Saturday, we know with confidence that our teams will respond to the call to action and effectively address whatever situation we encounter,” Russell said. “Our official Emergency Preparedness team may be small, but everyone in the organization has a role to play in these efforts, and it is a pleasure and a privilege to partner with this wide and diverse group of leaders and staff.”

Witnessing wider engagement in emergency preparedness across the Brigham community has been a rewarding experience, Goralnick added.

“When I first came here, we’d have a few people show up to a drill,” he said. “Now, there are so many more people engaged, excited and passionate about the need for this work.”