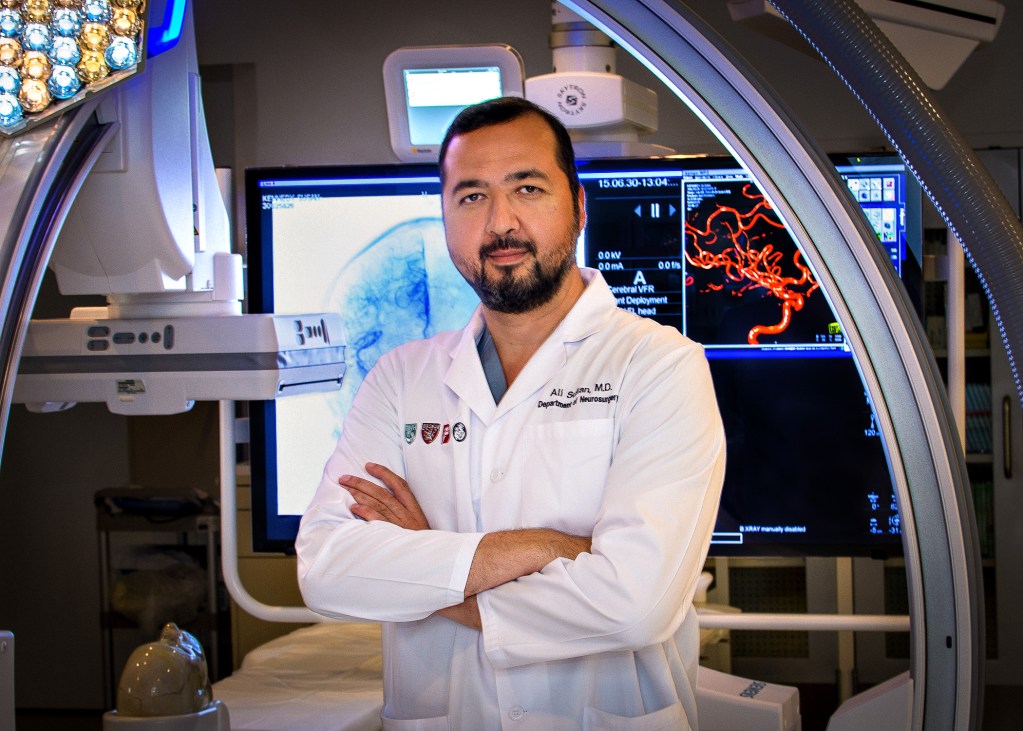 “If you’ve taken a Hippocratic oath that you will do no harm and your mission in life is to end suffering, then the picture is very clear what to do,” says Ali Aziz-Sultan, MD, about the humanitarian crisis in his home country of Afghanistan.

Ali Aziz-Sultan, MD, chief of Vascular and Endovascular Neurosurgery, was only 6 years old when the Soviets invaded his home city of Kabul, Afghanistan, in 1979, but the terrifying sights and sounds of fighter jets flying overhead and people fighting in the streets are forever seared into his memory.

His once peaceful neighborhood became a warzone overnight. He and his family hid in their basement for days until the chaos outside settled down.

But even after the gunfire stopped, Aziz-Sultan’s parents knew they weren’t safe. Although they were physicians, their extended family was heavily involved in politics — a connection that made them targets. In the next few days, Aziz-Sultan’s family quietly gathered their belongings, swapped their Western-style clothes for traditional Afghan attire and arranged for a smuggler to get them out of the country.

In just a few days, they became war refugees — crammed into a pickup truck barreling through the rural mountains to Pakistan. Once there, they shuffled between different hotel rooms, each accommodation smaller than the last as their funds dried up. Eventually, the family used what remained of their cash to buy airfare to Germany, where they declared political asylum.

Four decades later, as he watches the deadly violence unfolding in his home country, Aziz-Sultan said his heart aches for Afghanistan’s people. At the same time, he said, it has been distressing to see the national focus shift from the massive humanitarian crisis to debates about politics.

“When you hear the narratives on TV, you forget that it’s a country with fathers, mothers and children,” Aziz-Sultan said. “They feel just like you and I do for our loved ones. They’re just like us.”

‘You See the Child That You Were’

Even after so much personal hardship, Aziz-Sultan says his family was incredibly fortunate. In Germany, his parents were contacted by two American physicians they had known who offered to sponsor them to come to the U.S. They relocated to Indiana and then Virginia, where the family of five shared a modest apartment with 13 relatives. Aziz-Sultan’s parents, once OB-GYNs with thriving medical careers in Kabul, found jobs at a local hospital as janitors.

“They never, ever complained. They were always very grateful, and I understand that now that I have children of my own,” Aziz-Sultan said. “Their mentality — being grateful and thanking God for things that we had instead of complaining — really stayed with me.”

Ever since accompanying his mother to work as a child, Aziz-Sultan dreamed of becoming a doctor one day himself. Thanks to the support of caring mentors, he gained acceptance into medical school and pursued a neurosurgery residency.

With a characteristic humility, Aziz-Sultan insists that it wasn’t a rare intellectual gift that led him to professional success. (He jokes that playing video games as a teenager equipped him with the skills needed for today’s high-tech surgical tools.) Instead, he points to the importance of mentorship, guidance, personal drive and leading with compassion.

“When somebody has a neurosurgical problem, it’s serious, and I can relate to people like that. I can empathize. I can hold a hand and be present to comfort people. That’s a skill set built on a life of hardship,” he said. “The best of people shines through the worst of conditions. You see it a couple of times and you always want to be there to help. You see the child that you were, the struggles that you had in those moments and the immense support people gave you. It becomes an honor to be in that space, and that’s what my patients are to me. That’s the privilege neurosurgery has given me.”

Aziz-Sultan sees his own identity as a refugee — having learned to blend into new cultures and communities as his family’s lives were uprooted time and again — as almost like a superpower. His experiences inspired a collaborative workstyle that has shaped the Division of Vascular and Endovascular Neurosurgery since he was recruited to lead it in 2013.

“This ability to see and respect different people allowed us to build teams from different subspecialties — including neurologists and radiologists — without any turf wars and with a focus on trust, honesty and compassionate, excellent human care,” he said. “And because of that, we were able to bring together very special people at the Brigham and build a center that, in my mind, is second to none.”

Since early in his career, Aziz-Sultan has traveled back to Afghanistan several times to volunteer his time as a neurosurgeon and deliver much-needed medical supplies to physician colleagues there.

When the COVID-19 pandemic struck, he began collaborating with Harvard’s Program in Global Surgery and Social Change to identify neurosurgical needs at hospitals throughout Afghanistan and ways to support them remotely. Their vision was to use mobile technologies to enable U.S.-based specialists to support their Afghan colleagues with virtual consults and other telehealth applications.

As the recent violence escalated, however, and Afghan physicians reported an urgent need for trauma-related supplies, their plans changed. The team reached out to the World Federation of Neurosurgical Societies and secured 20 high-end surgical kits for trauma patients — shipping them to strategically located public hospitals around the country they had previously identified through their earlier project. Now, Aziz-Sultan says, they are raising funds and working to get another shipment of medical equipment into the country.

“The entire future of this country is getting choked,” Aziz-Sultan said, reflecting on the urgency of their mission. “If you’ve taken a Hippocratic oath that you will do no harm and your mission in life is to end suffering, then the picture is very clear what to do.”

Despite the latest tragedies, Aziz-Sultan says there is reason for optimism.

“There is desperation, but I’m also hopeful. Afghans are some of the most resilient, genuine and caring human beings in the world. They’ve been hardened by war, but they’re also survivors,” he said. “I think with proper support of basic human needs and rights that maybe we can start to pave a different path.”