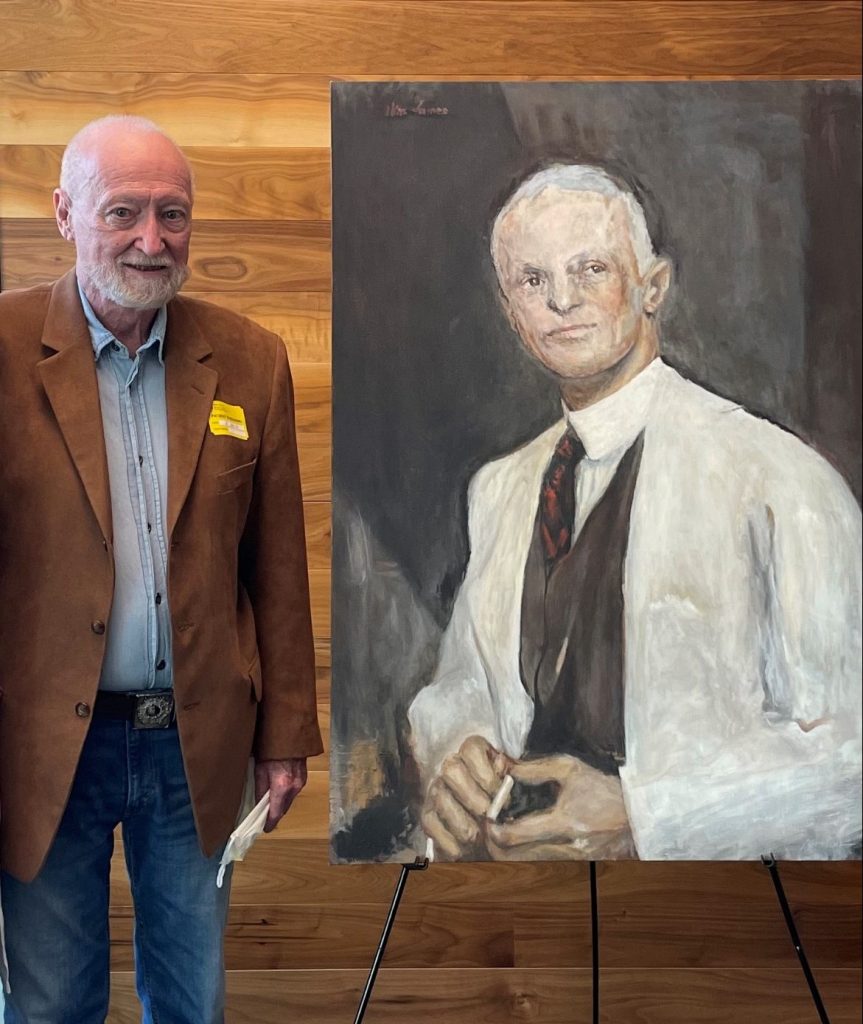 John Gamache, standing next to a portrait he recently completed of renowned neurosurgeon Harvey Cushing, MD

Two years ago, John Gamache was recovering in his hospital room at the Brigham when a nurse stopped by to ask if she could get him anything. A cup of ginger ale would be great, he told her. She brought it to him and set it on a nearby tray.

Gamache picked up the cup with his left hand and held it steady while his daughter, who was visiting him, watched in awe. As he brought the cup to his lips, she took a photo to commemorate the occasion. Such a seemingly simple act was, in fact, a remarkable feat for Gamache, who had been living with an intractable essential tremor for about 50 years. The condition is a movement disorder that causes a person’s hands to shake without their control.

Until this point, holding any item steady was impossible for Gamache. While eating and drinking presented their own frustrations, Gamache, a professional portrait artist, had been most devastated by the increasing difficulty he encountered when bringing a paintbrush to canvas as his tremor worsened with age.

“For a whole year, I didn’t paint. It was just too much,” he recalled. “It was depressing and stressful.”

Gamache’s celebratory sip of ginger ale took place shortly after he had undergone a novel procedure developed at the Brigham known as a focused ultrasound thalamotomy — a treatment technique that uses sound waves and imaging technologies to precisely target brain tissue without any incisions. After four rounds of treatment, the tremor in Gamache’s left hand nearly vanished.

As a token of gratitude for his life-changing outcome, Gamache painted a portrait of Cosgrove and shipped it to the Brigham from his Florida home.

Cosgrove was so impressed by his patient’s skill — and touched by his kind gesture — that he commissioned Gamache to paint a reproduction of a portrait of the late Harvey Cushing, MD, founding chair of the Brigham’s Department of Neurosurgery and celebrated worldwide as the “father of neurosurgery.” The original work, painted by impressionist artist William James in the early 20th century, is on display in Harvard’s Fogg Museum.

On Aug. 24, as part of his annual trip from Florida to the Brigham for a follow-up appointment, Gamache transported the painting by car and presented the completed Cushing portrait to Cosgrove and E. Antonio Chiocca, MD, PhD, chair of Neurosurgery.

“While we have a few memorabilia from Cushing’s time, there was no centerpiece in the department acknowledging his legacy,” Cosgrove said. “We’ve wanted to get a portrait of Cushing done for some time, and I thought that John did such an amazing job on my portrait. It became this lovely arc of stories over 100 years — from the father of neurosurgery being here at the Brigham, to focused ultrasound being developed at the Brigham, to John having such a successful outcome with focused ultrasound, to him using his restored function to paint this wonderful portrait of Cushing, which will be displayed in a place of honor.”

For Gamache, who trained as a realistic representational artist, taking on an impressionist reproduction was a new challenge of his skills. Ultimately, it took more than a year for Gamache to feel satisfied with the finished product, which measures the same dimensions as the original work: 34 inches by 46 inches. 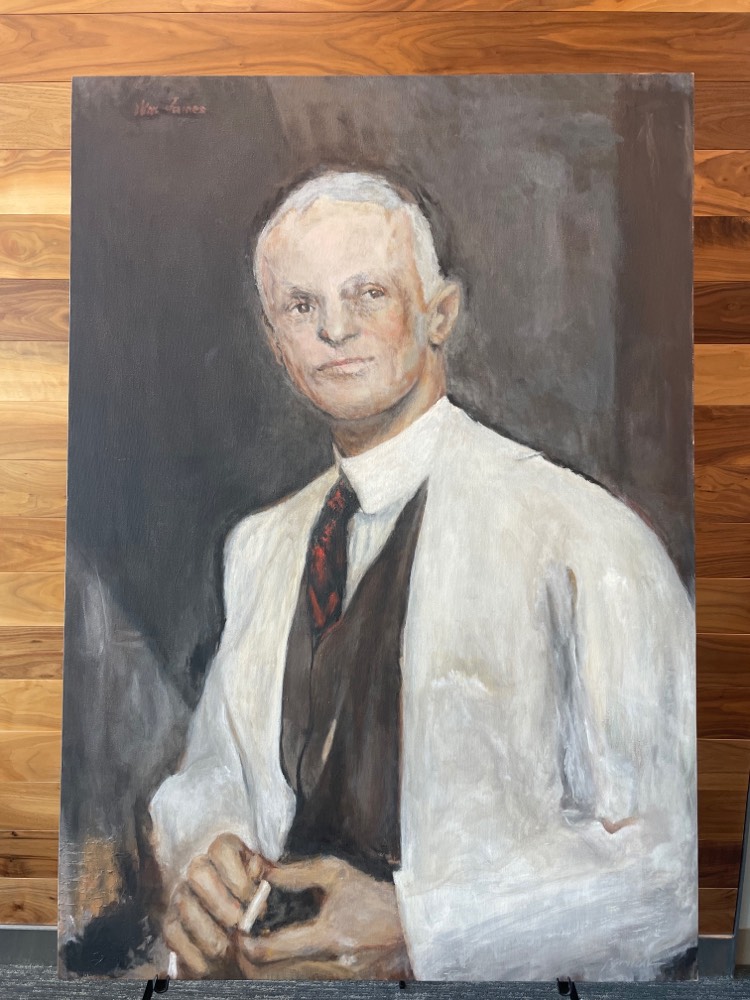 A closer look at Gamache’s portrait of Dr. Cushing, which is a reproduction of a painting currently on display in Harvard’s Fogg Museum

“I’m a stickler for things. I make my art perfect,” he said. “I’ve never done impressionist painting before.  The original artist used a little brush on a lot of his painting, especially on the face and the detail on the hands. I tried to replicate that technique to make it like the master copy.”

Nailing those painstaking details would have been even more challenging if his tremor were still an issue. Gamache recalled how the condition first emerged in his 20s. The shaking was mild at first, and he still found he could paint comfortably. It worsened over the years, and by his late 50s, it had become disruptive to his life. At age 62, he retired with disability from his job as a creative director and designer. Tasks like using a computer, picking up a glass or dialing a phone number felt impossible.

When he attempted to paint, Gamache tried using his other hand — which also has a tremor — to steady the one holding the brush. It didn’t prove successful.

Growing increasingly frustrated and demoralized, Gamache spent the next decade researching possible treatments and trying to enroll in clinical trials in Florida. After failing to find a local option, he looked to his home state, Massachusetts, and learned about the Brigham’s focused ultrasound program.

During his first meeting with Cosgrove, Gamache said he was immediately impressed by his care team’s commitment and compassion.

“Dr. Cosgrove spent over an hour with me in his office,” Gamache said. “I felt like family. I felt almost like I was at his home.”

Seeing patients like Gamache get back to doing what they love with the help of innovative procedures like focused ultrasound is one of the greatest rewards of this work, Cosgrove says.

“It’s no-touch brain surgery. This remarkably innovative technology can restore basic functions like writing, eating and combing your hair or brushing your teeth, all the way up to the highest functions of making beautiful art,” Cosgrove said. “That’s why we’re all here.”