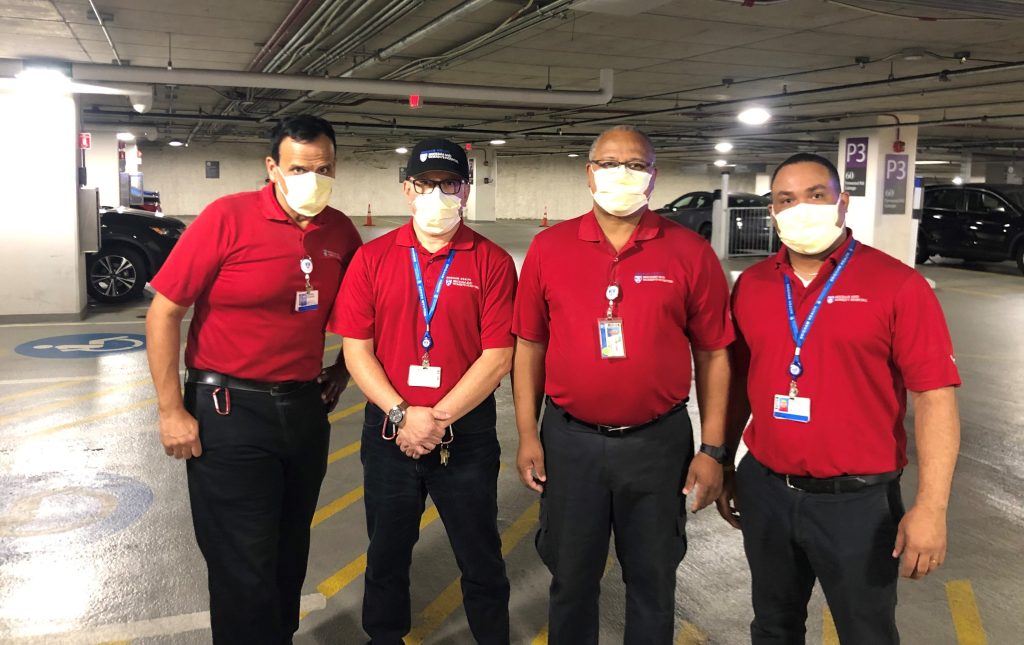 Luis Hernandez, manager of the Hale Building for Transformative Medicine’s parking garage, was just starting his workday on Aug. 17 when he saw a worrisome scene on the second level of the garage: a car at the entry gate had smoke coming from its hood. He called over his Valet Services colleague Martin Amador, who came running out of the nearby staff breakroom when he saw the state of the vehicle.

“I thought maybe it overheated,” said Amador, who hurried over to the car with Hernandez to notify the driver and suggest that she turn off her car or put it in neutral so that they could push it out of the way.

She misunderstood and tried to restart the engine instead.

“Suddenly, I saw flames coming out of the hood,” Amador said, recalling how thick, black smoke quickly filled the garage as the fire grew. “It was really scary. I thought the car was going to explode.”

Amador, a member of the Valet Services team for over four years, and Hernandez, who has been with the team for 22 years, reacted quickly. Amador grabbed a nearby fire extinguisher and pulled the fire alarm, while Hernandez helped the driver exit her vehicle. Hernandez called Brigham Police and Security and escorted the driver upstairs and outside the garage to safety.

Amador tried to dampen the flames with the fire extinguisher, but the fire showed no signs of letting up. He rushed down to the third level of the garage to get help from two Valet Services colleagues, Andres Arias and Jerison Peguero, and grab additional fire extinguishers.

The team of four were able to diminish the fire somewhat while Boston Fire Department (BFD) was en route to the scene, but they quickly recognized the safest thing to do next was evacuate. Amador, Arias and Peguero directed other vehicles and pedestrians away from the scene, while Hernandez checked the area to ensure no one was trapped in the garage.

“I believe that if you are in charge, you are the last person to go out,” Hernandez said.

During the emergency, Police and Security staff quickly mobilized to evacuate the building and conduct traffic control around Fenwood Road and Vining Street. Staff from Patient and Family Relations, Nursing Administration and other departments assisted with the evacuation. Within minutes, firefighters arrived and extinguished the flames. No known injuries resulted from the event.

Kevin Slattery, director of Police, Security and Parking, commended the team for their response.

“The four valets’ quick response, teamwork and actions to attempt to extinguish the fire as the car was in flames while BFD was responding helped to prevent a much larger impact to the safety of our patients, employees and visitors and reduced the extent of property damage,” Slattery said. “The operator of the car was able to exit the vehicle uninjured.”

Brian Murray, director of VPNE Parking Solutions, said he was “humbled and incredibly proud” of the bravery and dedication his team demonstrated.

“They have this commitment inside them — they’re ready to respond to anything,” Murray said.