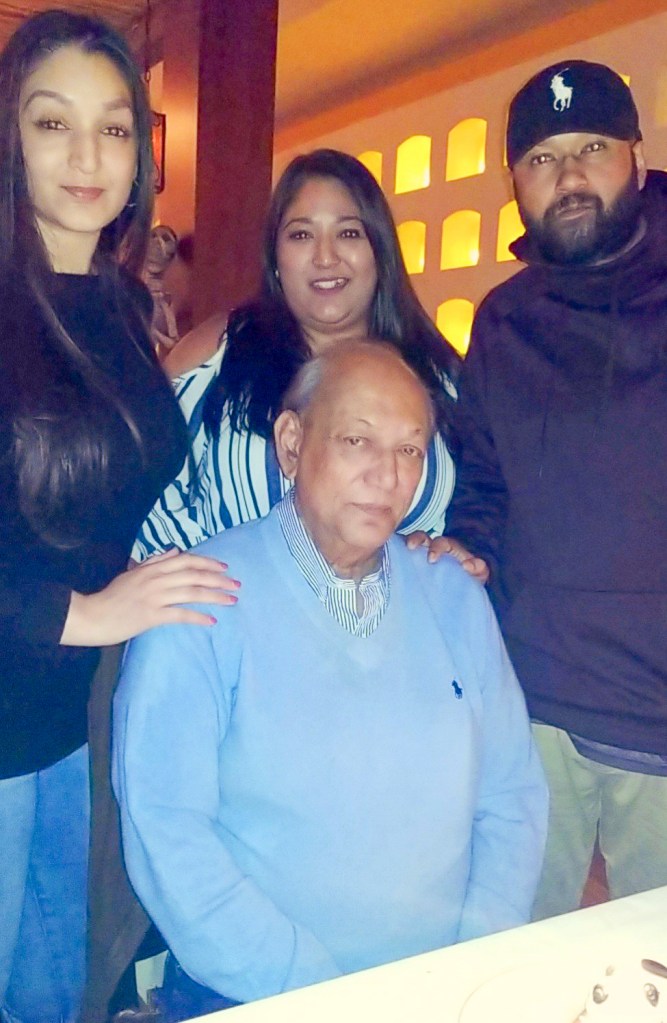 Sajjad Khan (front center), with his three children (back, from left): Seema, Kashfia and Sajeed

For 69-year-old Sajjad Khan, every breath is a reminder of the lung transplant that saved his life. An active father of three and successful banker, Khan had never worried about his health. But when walking up the stairs suddenly became an exhausting endeavor about three years ago, Khan knew that something wasn’t right.

Even after visiting his primary care doctor in Leominster and receiving a CT scan, it was unclear what was causing his difficulty breathing. His condition progressed rapidly, making everyday activities like getting dressed, combing his hair and walking feel like insurmountable tasks.

In March 2020, Khan was referred to the Brigham, where he met with Nirmal Sharma, MD, director of the Lung Transplantation Program. A renowned expert in pulmonary transplantation, Sharma and his colleagues quickly determined that Khan had progressive idiopathic pulmonary fibrosis, a chronic disease that causes scar tissue to build up in the lungs for an unknown reason. To save Khan’s life, they would need to act quickly and prepare for a lung transplantation.

The lung transplant team expeditiously evaluated Khan and listed him on the lung transplant waitlist. As Khan and his family anxiously waited, leaning on each other for support, Khan’s right heart began to fail — a result of the pulmonary fibrosis. In order to stabilize Khan’s condition, Sharma and Hari Mallidi, MD, the Surgical Director of Lung Transplantation, admitted Khan to the Brigham so that he could receive respiratory and cardiac support through an extracorporeal membrane oxygenation (ECMO) machine, that supports the patient’s heart and lungs when they can no longer perform these functions sufficiently on their own.

For Khan, the 48 hours that followed were testament to the power of both medicine and his family’s enduring hope. Shortly after Khan’s breathing stabilized on the ECMO, he received news that they had received a lung donor offer for him.

“It gave me my second life,” said Khan. “I never thought in my life that I could survive this, but I did.”

In August, he underwent a six-hour surgery — performed by a large, multidisciplinary team led by Antonio Coppolino, MD, a member of the Lung Transplant Program — to replace his old, scarred lungs with new donor lungs. When Khan woke up from the surgery, weak and disoriented, he said he could barely lift his finger or make out the faces of the people around him. After five days of recovery in the hospital, his memories and mental clarity began to return. When he sat up, he noticed that his oxygen tank — which he’d spent months relying on — was no longer by his side.

“I asked my nurse, ‘Where is my oxygen?’ and the nurse said, ‘You don’t have an oxygen tank.’ I said, ‘Excuse me, what?’ She said, ‘Yes. Ever since you had the operation, you haven’t needed an oxygen tank because your oxygen levels are absolutely fine.’ I was just amazed,” Khan recalled.

Despite the pervasive uncertainty and fear that characterized this stage of Khan’s life, his gratitude can be felt in the way he talks about the Brigham.

“Everyone was just so nice, helpful and caring in a way I’ve never seen in my life,” said Khan.

Khan, who was born and raised in Bangladesh, said he hopes that his positive experience encourages others from diverse backgrounds and minority communities to feel confident that the Brigham is a place where all patients receive world-class care.

“We perform transplants for patients from all walks of life,” noted Sharma, “and we continually strive to create an environment where everyone feels welcome.”

Khan’s new lungs have granted him the freedom to live each moment to the fullest. This means being active again and spending more time with his family.

“Within 30 hours, he was up and about. He’s back to his old self,” said his daughter Kashfia Khan. “This surgery saved his life, and we could not be any more grateful or feel any more blessed.”

Looking toward the future, Khan hopes to return to Bangladesh to visit his elder sister, who he said is like a mother to him.

“Now, I can do anything,” said Khan. “I’m talking and laughing again. It is unbelievable. I am back to living my normal life.”