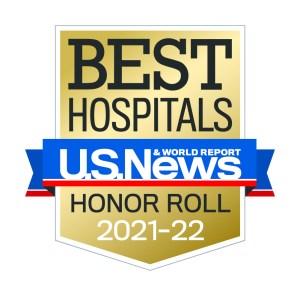 Brigham and Women’s Hospital earned a spot once again on U.S. News & World Report’s list of Best Hospitals, being named No. 14 on the magazine’s 2021 Honor Roll rankings. The Honor Roll is a distinction awarded to 20 hospitals in the country that deliver the best care for the most serious or complicated medical conditions and procedures.

The Brigham was ranked in 11 of the 15 specialties rated by U.S. News. The Brigham ranked fourth in cancer with Dana-Farber Cancer Institute as the Dana-Farber Brigham Cancer Center. Gynecology also ranked fourth, Rheumatology was fifth and Cardiology & Heart Surgery was 10th. Additionally, the Brigham earned the publication’s highest distinction of “high performing” in 16 of the 17 most common, serious and complicated medical conditions and procedures.

“It is wonderful to be acknowledged with these rankings, as they are a true testament to the dedication and talent of our Brigham community,” said Sunil Eappen, MD, MBA, interim president and chief medical officer. “But what I am most proud of is the exceptional and compassionate care that we deliver to our patients and their loved ones by upholding our shared values — We Care, We’re Stronger Together, We Create Breakthroughs and We Pursue Excellence.”

U.S. News’ Honor Roll rankings are based on a point system derived from a nationwide evaluation of nearly 5,000 medical centers in 15 adult specialties and 17 procedures and conditions.

Several other Mass General Brigham institutions were also honored on the annual list. Massachusetts General Hospital received the No. 5 spot on the Honor Roll, and three other Mass General Brigham hospitals — McLean Hospital, Spaulding Rehabilitation Hospital and Mass. Eye and Ear — were also recognized for national excellence. McLean Hospital was ranked No. 2 in the nation for psychiatry, and Spaulding Rehabilitation was ranked No. 3 for rehabilitation. Mass. Eye and Ear ranked second for ear, nose and throat care, as well as and fourth for ophthalmology.

The complete listing can be found online and will be published in the magazine’s August issue as part of its 2021–22 Best Hospitals Guide.

By the Numbers: Rankings by Specialty 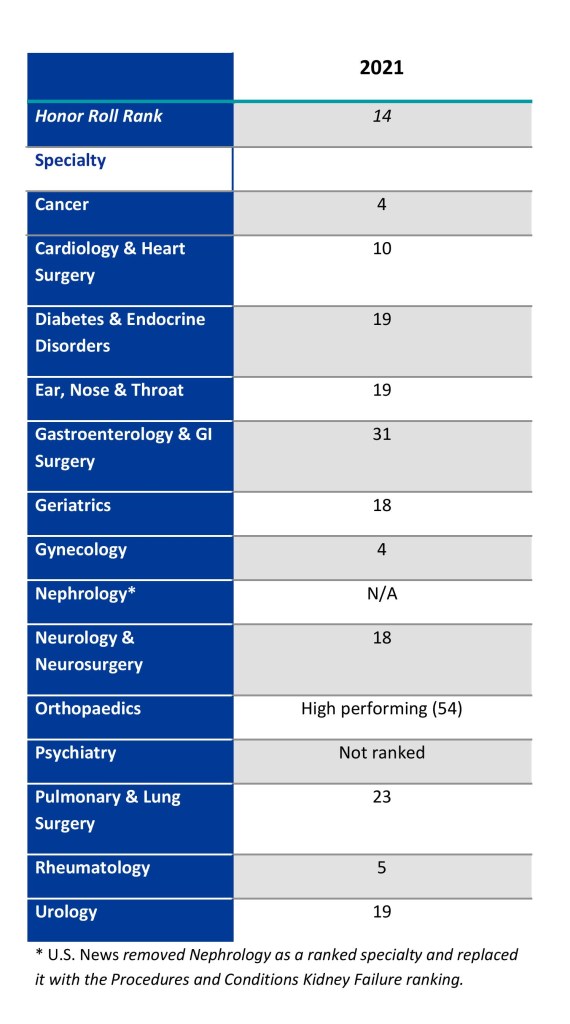