Her enthusiasm for life is so infectious that her Brigham care team in the Department of Radiation Oncology was inspired to organize several impromptu musical performances for Shadiamond and her family to comfort them during Shadiamond’s treatment sessions.

Sydney Sanford, head of the Child Life Program in Radiation Oncology, was one of the first individuals Shadiamond encountered upon beginning treatment. An expert at easing nerves and bringing lightheartedness to high-stress situations, particularly for younger patients, Sanford quickly became a friendly, familiar face to Shadiamond and her family.

“Every day, for six weeks, at 7 a.m., my mornings were brightened by Shadiamond and her incredible grandparents,” said Sanford. “She is a true ray of light who spread happiness to anyone that she encountered.”

Recognizing Shadiamond’s passion for music and dance, Sanford urged a colleague, Denis Surette, a radiation therapist in the department, to play his guitar for Shadiamond and her family, as he periodically had for other patients and Brigham staff.

In the quiet lull of the children’s waiting room, as Shadiamond prepared for radiation therapy, Surette strummed his guitar and softly sang songs that he found meaningful. Shadiamond hummed and swayed along to the music, greeting whatever fears she had with a smile.

For Surette, these moments were poignant. An avid believer in the healing powers of music, Surette had brought his father’s old guitar to the pediatric playroom in the Department of Radiation Oncology at the Brigham, where staff, patients and families could enjoy plucking its weathered strings.

“It was special,” said Surette, who recently left his role at the Brigham, reflecting on his performances for Shadiamond and her family. “Music can resonate with everybody. It meant a lot to me to be able to make Shadiamond happy.”

Although music can’t undo the hardships Shadiamond has endured, her family says it reminds them of the goodness that remains in the world.

“Shadiamond was always asking, ‘Where’s the guitar guy? I want him to play me a song,’” said Jacqueline Perez, Shadiamond’s grandmother. “They all loved her, and they treated us so kindly.” 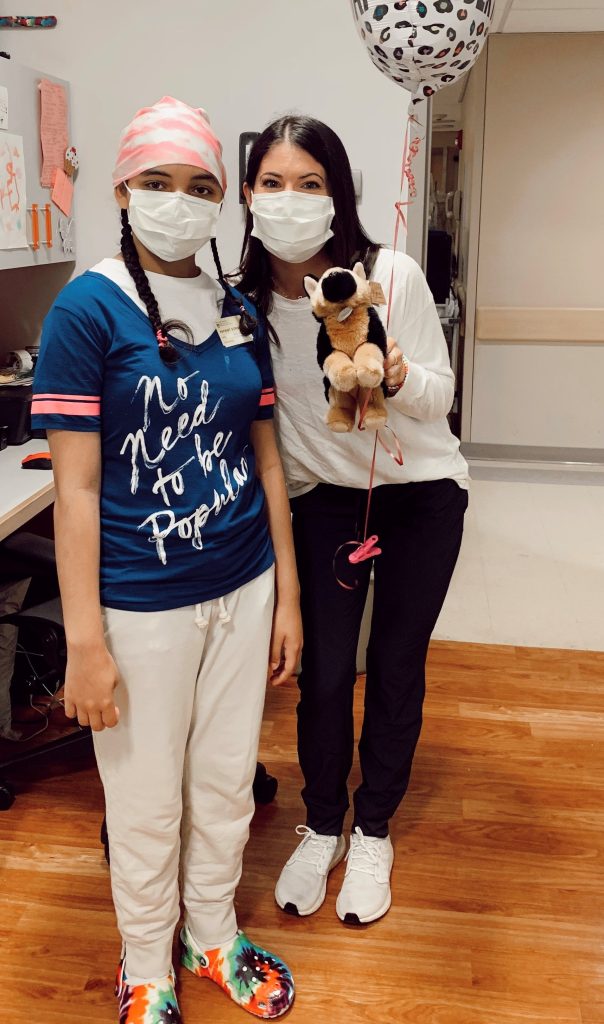 “She is a true ray of light,” says Sydney Sanford (right) of her young patient, Shadiamond Perez (left).

While Perez shares her granddaughter’s strong spirit, she said that the past year was incredibly challenging for her and her family. As the world around her was consumed by politics and the ongoing COVID-19 pandemic, Perez says her primary focus this past year has been ensuring the precious granddaughter she raised from birth became healthy again.

Although Shadiamond struggled throughout her young life with frequent seizures, electric shock sensations and chronic asthma, Perez never anticipated her granddaughter’s cancer diagnosis. On March 4, Perez tucked Shadiamond into bed at 8 p.m., as she always did. A mere fifteen minutes later, she heard Shadiamond cry out for help, claiming that her head was in excruciating pain. Knowing that Shadiamond was prone to severe migraines, Perez laid her down on the couch and watched her anxiously. When Shadiamond became disoriented and began vomiting, Perez knew that something was wrong and called 911.

Shadiamond was rushed by ambulance to a hospital near their home in Springfield, Mass. where the doctors quickly determined that she was experiencing internal bleeding of the brain due to a five-centimeter blood clot. Later that night, Shadiamond and her family were transported by helicopter to Boston Children’s Hospital. After consulting Perez, doctors in the Intensive Care Unit performed an operation to reduce Shadiamond’s internal bleeding, both removing a bone and temporarily placing tubes in Shadiamond’s head.

“I went ballistic,” said Perez. “I just cried and prayed.”

Shortly later, they performed a biopsy, determining that Shadiamond had a cancerous tumor on her brain and would need surgery to remove it, followed by five weeks of radiation therapy at the Brigham.

Despite experiencing some newfound challenges with her vision, and some minor difficulty with the mobility of one hand, Shadiamond woke up from this third surgery as her same happy self — her resilient spirit unscathed, her desire to dance stronger than ever. Still, Perez said that there are challenges on the horizon.

During a recent follow-up appointment, Shadiamond received an MRI, leading to the discovery of another brain tumor. Shadiamond’s sunny outlook continues to shine, however, and her family continues to remain hopeful that a bright future lies ahead.

“She’s a miracle,” said Perez. “They thought she wasn’t going to remember us and other family members. She did. Thank God. All the prayers make miracles.”