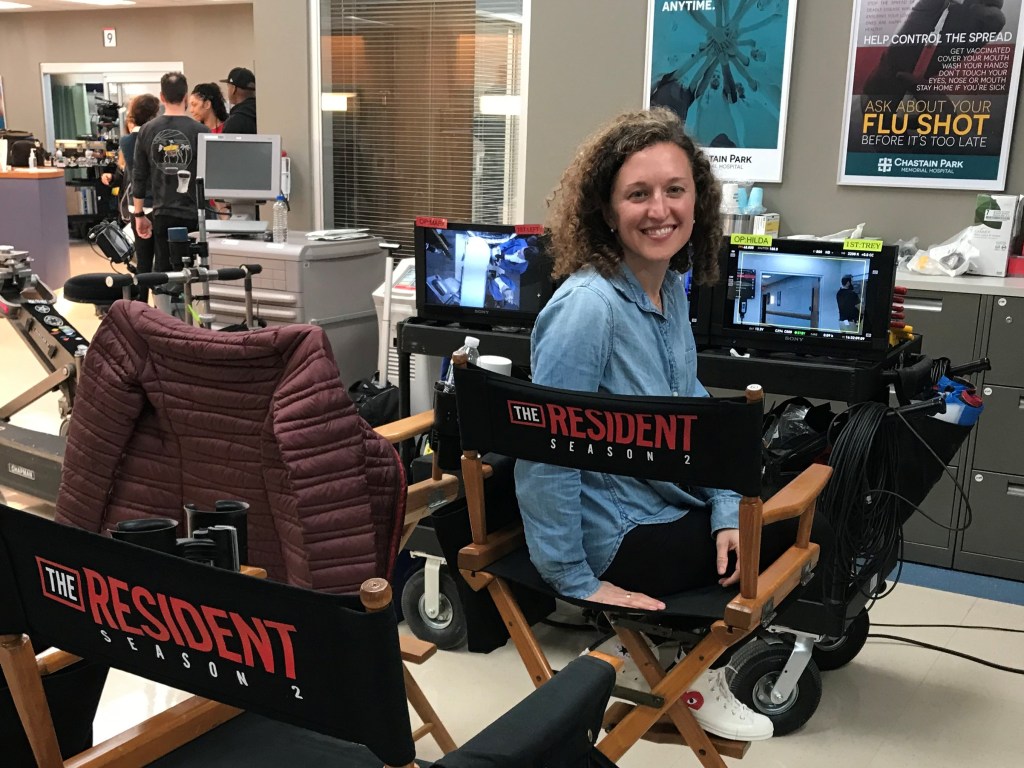 Daniela Lamas on the set of The Resident during the show’s second season, which was filmed in 2019. Lamas continues to serve as a writer on the show, which enters its fifth season this fall.

Daniela Lamas, MD, a pulmonary and critical care physician at the Brigham, has always enjoyed the heart-pounding experience of watching medical dramas on TV. Lamas has been passionate about medicine all her life, whether practicing it herself or enjoying its depiction in fiction.

Although Lamas had long dreamed of writing for a TV medical drama — and attempted for years to reach out to TV producers — it wasn’t until 2018 that opportunity struck.

Roshan Sethi, MD, an attending physician in the Department of Radiation Oncology, happened to be the co-creator for The Resident, a Fox medical TV drama that follows the lives of doctors and nurses at the fictional Chastain Memorial Hospital in Atlanta and enters its fifth season this fall. Recognizing the Brigham connection, Lamas applied for a position on The Resident’s writing team. Sethi and his fellow producers were quickly intrigued.

Not only did Lamas have an array of unique writing experiences— which include publishing her own book, You Can Stop Humming Now: A Doctor’s Stories of Life, Death, and In Between, and contributing to the New York Times — but she also had a reservoir of firsthand knowledge on the medical field. Although Sethi left the show to complete his residency and work in movies shortly before Lamas joined the writing team, Lamas was nonetheless grateful for the Brigham connection.

“She brings real insight to the show but also understands the demands of network entertainment,” Sethi said.

Upon beginning her new role, Lamas’ creative faculties quickly got to work. The stories, bred out of years of experience working in a hospital, came pouring out of her.

Lamas quickly noticed several similarities between her roles as a doctor and TV writer. In both contexts, she said, collaboration and teamwork are key. However, Lamas noted that there are also some striking differences between how the medical field is represented on TV and what she witnesses at work.

“In TV, I think we often come down on the side of drama,” said Lamas. “They tell me often ‘this is not a documentary.’ The way we tell stories about the characters can create a patient outcome that is not completely realistic.”

Lamas noted that TV rarely shows the complexity of medicine, especially when it doesn’t follow a straightforward path or lead to a satisfying conclusion. The sometimes painstakingly slow procedures or the ever-puzzling feeling that nothing more can be done to save someone don’t necessarily align with high-stakes, fast-moving, against-all-odds plotlines on network TV. 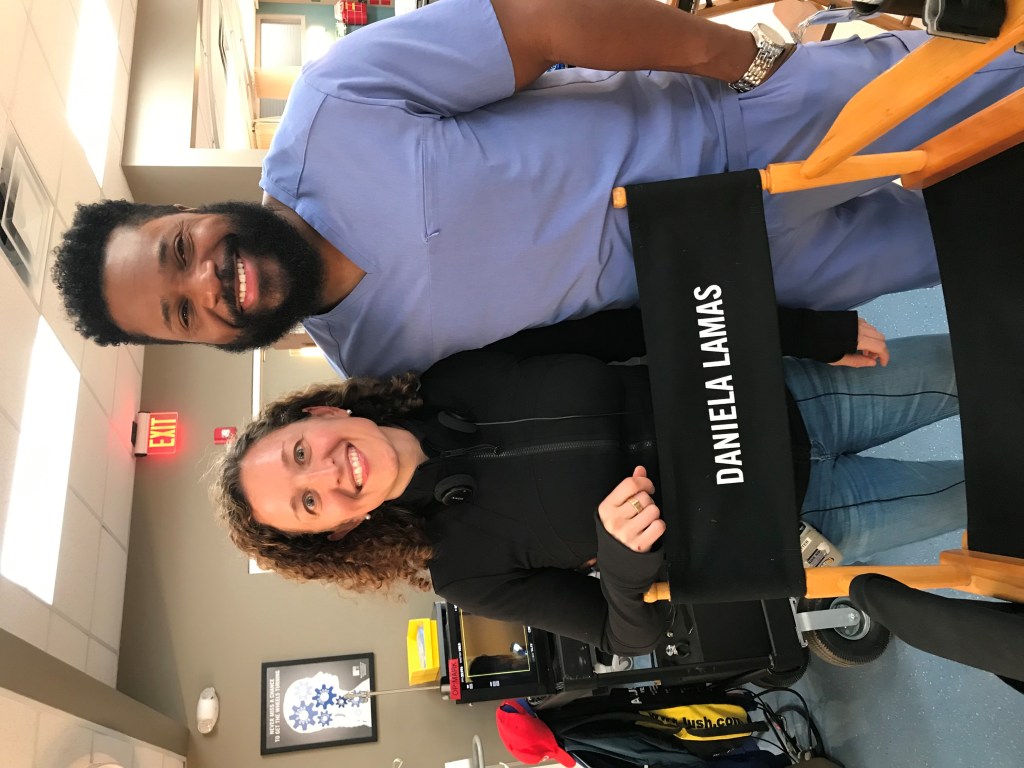 Daniela Lamas on the set of The Resident with Malcolm-Jamal Warner, who plays surgeon A.J. Austin (“The Raptor”) on the show, in 2019

Lamas is committed to making The Resident more reflective of reality through creating narratives that will grip, move and resonate with her audience, while still maintaining as much authenticity as possible.

“I used to watch television and think, ‘Why can’t it be more realistic?’” she said. “But there are these mandates to make things dramatic, have happy endings and have the moment before the commercial be built up to this escalation.”

While sometimes unrealistic, these fictional plotlines can also be viewed as a platform for spreading awareness around lesser-known illnesses.

Several years ago, Lamas had a patient who was diagnosed with sickle cell anemia and was hospitalized on a ventilator for several months before she passed away. The patient’s enthusiasm for people, poetry and life itself made her presence linger in Lamas’ mind. With permission from the patient’s family, her story eventually inspired a character, Rose, who appeared in the most recent season of The Resident.

While Lamas’ patient — only 30 years old — was not able to overcome sickle cell anemia, the character in the show is introduced to an innovative form of gene therapy, which ultimately saves her life.

“My patient’s family members who were able to watch the episodes said they found it meaningful to have sickle cell disease in a network TV show because it helped increase understanding, at least among those they had talked with who had seen the show,” said Lamas.

Perhaps the greatest challenge Lamas and her fellow writers faced this year, however, was deciding how to represent the COVID-19 pandemic in a single 45-minute episode. Not only did they have to figure out which stories to tell, but they also had to predict what a post-pandemic world would look like in the episodes that followed.

Creating a script that generates realistic characters and plausible scenes is no easy task. Since becoming a TV writer, Lamas said she pays closer attention to her surroundings and to the nuances of human behavior.

“When you’re thinking about a script, you have to think about where people are in a room and what they are going to do or say,” she said. “Thinking in three dimensions while writing is something I have never done before, but it is useful for all types of writing.”

This perceptiveness also serves Lamas well in the hospital. As a physician, she continually bears witness to suffering and healing — experiences that add meaning to her life.

“Working in the medical field, you have this amazing passport into these extraordinarily important, scary, sad, hopeful moments in people’s lives,” she said. “Sometimes, I think about letting the writing take all my time, but I love being a doctor so much. I’m extraordinarily lucky to be able to do both.”