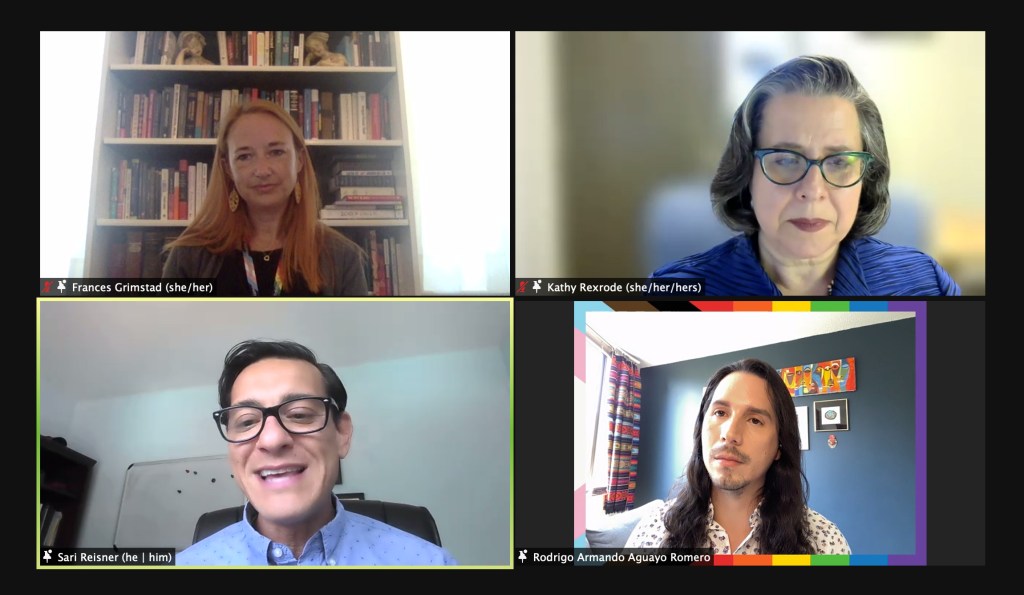 Ensuring that research is inclusive and respectful of transgender and gender-diverse identities often begins with asking the right questions for the right reasons.

How are transgender individuals being represented in a study? From a research perspective, is it more informative to know a person’s biological sex or their gender? Which practices are being used to gather data and are they inclusive?

On June 30, a group of experts from the Brigham and beyond explored these questions and more during the virtual panel discussion, “What Does Transgender and Gender Diverse Inclusivity Look Like in Research?”

The panel — which featured Rodrigo A. Aguayo-Romero, PhD, a research fellow in the Department of Medicine at the Brigham, Frances Grimstad, MD, MS, director of Trans Reproductive Health Services at Boston Children’s Hospital, and Sari L. Reisner, ScD, director of Transgender Research in the Division of Endocrinology, Diabetes and Hypertension at the Brigham — cast light on practical ways to cultivate a greater sense of equality and representation for transgender and gender-diverse individuals in research.

Moderated by Kathryn M. Rexrode, MD, MPH, chief of the Division of Women’s Health, the

hour-long event was hosted by the Brigham Research Institute (BRI) and the Center for Diversity and Inclusion in celebration of Pride Month and drew a wide audience of researchers, professors, health care workers and students.

‘We Have Different Dimensions of Gender to Consider’

In order to be as accurate as possible in the representation of data in research projects, all three panelists emphasized that researchers must recognize gender is not binary — meaning that it is more than simply male or female. Rather, they noted, gender is a nuanced spectrum that is sometimes more relevant to a study than biological sex.

Grimstad said a study that focuses on adolescents’ transportation preferences is an example of a situation in which defining the participants’ internal sense of identity would be far more informative than knowing their biological sex characteristics.

Discerning when to ask about sex and when to inquire about gender may seem like a complex task, but Reisner affirmed it is a crucial step in making respondents feel seen and heard.

“When we are talking about gender, we are talking about the sociocultural dimensions that become mapped onto biology,” said Reisner. “Oftentimes, we have different dimensions of gender to consider, such as gender identity, meaning a person’s internal felt sense of themselves, or gender expression. These different dimensions have been shown to matter, and I’d encourage everyone to think about which are important and when in your own research.”

Ensuring gender equity for transgender individuals in research requires more than simply reflecting on the various dimensions of gender, however.

“Inclusivity refers to the continuous work to dismantle power imbalances and create equity in positions of power and decision-making roles — not only behind the scenes in research but also in the research itself — in order to ensure that those who come from historically marginalized identities are given a voice to be heard,” said Aguayo-Romero.

For transgender and gender-diverse individuals’ voices to be heard, they must first be given the freedom to define themselves on their own terms, experts explained. In discussing data collection strategies and surveys, panelists said that researchers must be wary not to unintentionally project a limited view of gender identity onto research participants. This means diversifying both the questions they ask during studies and the potential ways participants can respond.

For example, rather than forcing participants to select a single, static gender identity when collecting demographics, Grimstad suggested asking, “What is the closest and most comfortable descriptor of your gender right now?” Not only is this word choice more inclusive, but it also ensures that the data collected is as accurate and thorough as can be.

“We as researchers cannot deny we get to choose the questions we engage in, which means that there is bias in the research we are doing,” said Grimstad. “This means that if we are working with a community that has been historically marginalized and underserved and excluded, then it is our duty to think intentionally about how the questions we can ask can work toward their liberation.”

The panelists agreed that it is only when researchers begin to ask these questions that their respondents will be able to answer freely and authentically — allowing their voices to fully resound in the data.