This article is adapted from content originally published on DFCI Online. 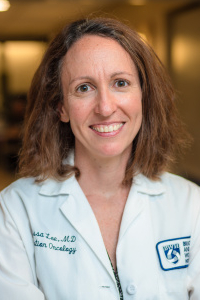 Brigham and Women’s Hospital mourns the loss of Larissa Lee, MD, a pioneer in the treatment of gynecologic cancers and director of the Gynecologic Radiation Oncology Service at the Brigham and Dana-Farber Cancer Institute, who died June 23 of advanced gastrointestinal cancer. She was 44.

Respected as a researcher, clinician, teacher, mentor and colleague, Dr. Lee was a member of the Department of Radiation Oncology since 2010. Her scientific contributions over the past decade include advances in radiation treatment techniques, trials of novel immunotherapies and studies to overcome the problem of treatment resistance. Her influence on the field of gynecologic cancers and the example she set of compassion, scientific rigor and collaborative spirit left an indelible impression, according to her colleagues.

“Colleagues from around the world sought out her mentorship, expertise and technical skills,” said Neil Martin, MD, MPH, clinical director for Radiation Oncology, who knew Lee from their days as residents at the Brigham and Dana-Farber. “Larissa served some of our most vulnerable patients with complex medical and social situations. She was absolutely beloved by her patients as they recognized her genuine care for them as individuals.”

Her compassion took many forms, colleagues said, but was always evident in a desire to be of assistance.

“When I think of Larissa, I think of a quote from Albert Pike: ‘What we do for ourselves dies with us. What we do for others and for the world remains immortal,’” said Daphne Haas-Kogan, MD, chair of Radiation Oncology.

Haas-Kogan experienced that thoughtfulness when she joined the Brigham and Dana-Farber in 2015.

“There’s always a lot to learn when starting a new position,” Haas-Kogan said. “Larissa was one of those on whom I relied. She not only taught me some aspects of radiation oncology that were outside my area of expertise but also was a model of the collaborative approach that forms the foundation of our department’s mission.”

As a clinician, Dr. Lee was known for her expertise in brachytherapy, in which radioactive material sealed in small pellets is implanted in cancerous tissue to kill tumor cells. Her reputation in this field helped make the Gynecologic Radiation Oncology Service the treatment center of choice for patients across New England and drew trainees from around the world.

Her research centered on improving the efficacy of radiation therapy and reducing its side effects. She led efforts to improve the use of biomarkers — bodily substances that can indicate a tumor’s aggressiveness or response to treatment — in addition to developing devices used in treatment and directing multiple clinical trials of potential therapies and techniques.

As an inventor, Dr. Lee helped design and test new tools for the treatment of gynecologic cancers. She developed a device that measures oxygen content within tumors during brachytherapy procedures. This information helps doctors identify portions of the tumor where oxygen levels are low, which tend to be less susceptible to radiation therapy. These areas can then be earmarked for additional doses.

“Larissa devoted her career to the study of gynecologic cancers and developing better and less toxic radiation treatments for women with gynecologic cancers,” said Ursula Matulonis, MD, chief of the Division of Gynecologic Oncology. “She was a superb and compassionate clinician who cared deeply about her patients and was a wonderful collaborator and colleague. She was a treasure to all of us who had the honor of knowing her and interacting with her. She was an incredibly special person, and she will never be forgotten.”

Colleagues are also raising funds to establish the Larissa Lee, MD, Endowed Lecture at the Brigham and Dana-Farber to focus on the issues Dr. Lee was most passionate about.

Dr. Lee is survived by her husband, Jai Eswara, MD; their sons, Ethan and Erik; her sister, Brittany Bychkovsky, MD; her brother, Chris Mellee; and her parents, Susan and John Lee.

Donations for the lectureship can be made via its Giving Page, the Pan-Mass Challenge page of Dr. Lee’s sister, Brittany Bychkovsky, MD, of the Breast Oncology Center, or Neil Martin’s Marathon Team page.