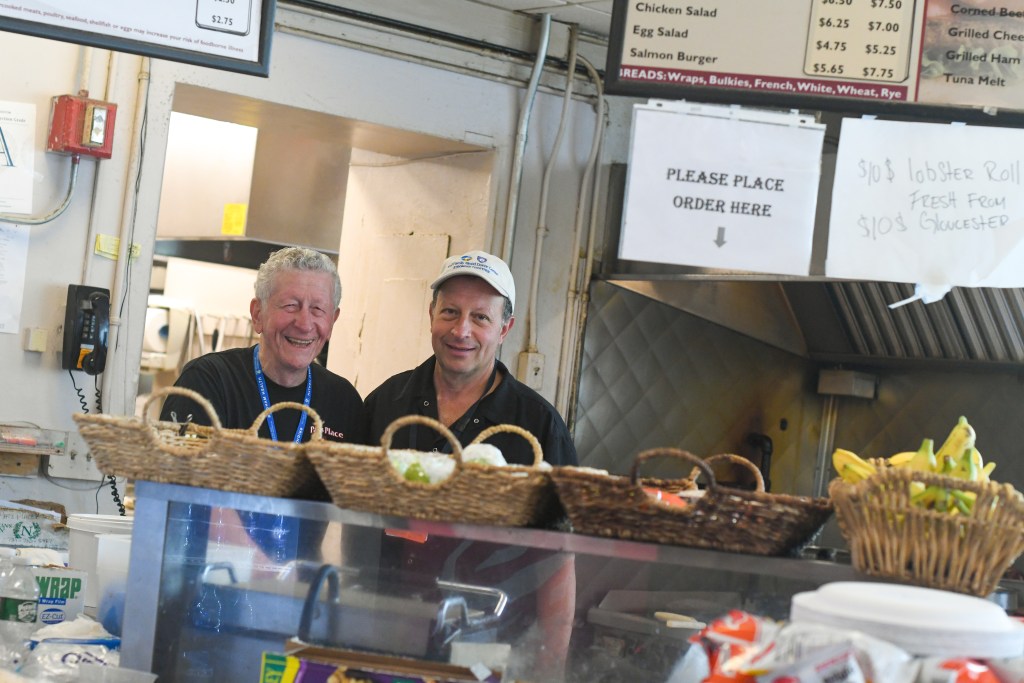 From left: Pat Bruno Sr. and Pat Bruno Jr. stand behind the counter in Pat’s Place at 15 Francis St.

In the early 1970s, a hospital administrator at the former Boston Hospital for Women approached a friend and local restaurant owner, Pat Bruno Sr., to ask if he was interested in taking over the hospital’s coffee shop. The café had kept erratic hours and was in dire need of an experienced, steady hand to make it successful.

He signed on, and the first iteration of Pat’s Place opened for business in 1975. The hospital café soon became a bustling destination for staff, patients and visitors — attracting patrons from all walks of life, including the Kennedys and famed former House Speaker Tip O’Neill, recalled Pat Bruno Jr., who started working at his father’s business after school as a teenager.

Just six years after Pat’s Place launched, a significant shift in the health care landscape threatened to close the café. In 1980, several Longwood Medical Area hospitals merged — the Boston Hospital for Women among them — to form Brigham and Women’s Hospital. Approximately 500 staff members and loyal customers signed a petition urging the newly established Brigham and Women’s Hospital to find a new home for Pat’s Place.

An August 1981 edition of Inside Brigham and Women’s Hospital announced the welcome news: “Pat Bruno, the popular proprietor of ‘Pat’s Place’ at the former Boston Hospital for Women, is back in business.” Pat Sr., “known for his friendly smile and his uncanny ability to remember names and faces,” the hospital newsletter added, would serve breakfast and lunch in the 70-seat café at 15 Francis St., where it remains today.

Having cemented itself as a beloved part of the Brigham community for more than four decades, Pat’s Place will close its doors for good on July 31. The younger Pat, who took over the business about 25 years ago, said it’s time for a new chapter.

“This pandemic put things into focus for me, and I got to realize life is not all about working,” he said. “I’m approaching retirement age, my father is 86, I’m expecting my first grandchild soon. It’s a good time for me to slow down.” 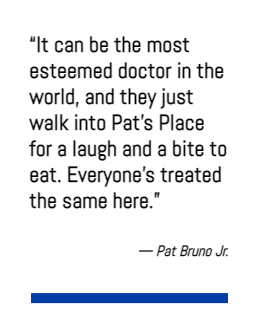 Still, the moment is bittersweet, the younger Pat acknowledged.

“There are people here I’ve known for 40 years. You get to know their lives and become like their psychiatrist. You wouldn’t see that in a regular restaurant,” he said. “It can be the most esteemed doctor in the world, and they just walk into Pat’s Place for a laugh and a bite to eat. Everyone’s treated the same here.”

While the Pat’s Place café is closing, its popular catering business will remain operational and be located in the Brigham. Brigham departments and staff can continue to place Pat’s Place catering orders after July 31 by contacting Pat Bruno at p.bruno26@yahoo.com or pbruno2@partners.org.

“Pat’s Place has been a staple of our community for nearly half a century, and we’re thrilled that Pat will continue to offer his hearty and well-loved meals to our employees through his new catering-only business,” said Douglas Carney, AIA, MBA, senior vice president of Real Estate, Facilities and Operations.

The Brigham has committed to Pat Jr. and his staff to help find each employee who both want and qualify to find replacement jobs in the Brigham family if they want to stay, Carney said. The hospital is also planning for future alternative uses for the space, both long- and short-term options, to ensure there is a food service available at that end of the campus.

‘Where Everyone Knows Your Name’

A big part of what made Pat’s Place so inviting and comfortable was the friendliness, warmth and familiarity between its employees and customers. Known fondly by regulars as “the crew,” the café’s cooks, cashiers and other staff — many of whom come from the local community — are just as big an attraction at Pat’s Place as the food, said several longtime patrons. 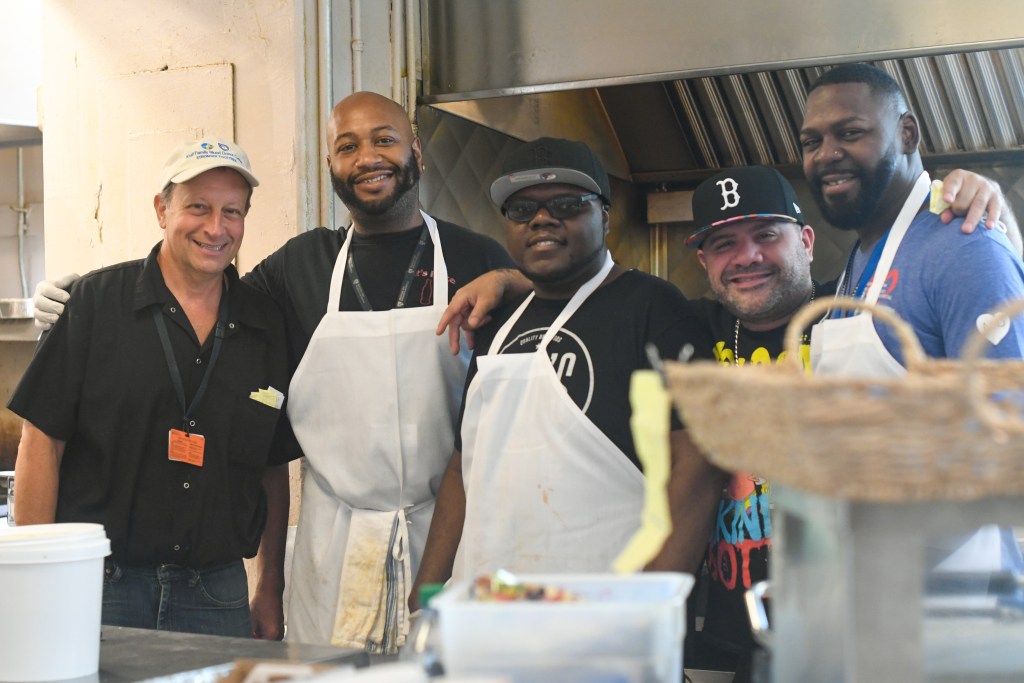 Known fondly by regulars as “the crew,” the café’s cooks, cashiers and other staff are just as big an attraction at Pat’s Place as the food.

“Pat’s Place is very special to me. It reminded me of the TV show Cheers, where everyone knows your name,” said Florence Connolly, an operation manager in the Division of Cardiac Surgery. “When I would go in there, they all would say, ‘Flo!’ I would feel like Norman from Cheers.”

Connolly — a customer for 25 years whose favorite orders include the café’s tuna sandwich with extra pickles — was saddened to hear the news about Pat’s Place closing.

“Pat is a dear friend who always took care of me, no matter how busy he was and how many last-minute crazy requests I had. He is kind, generous and a true gentleman,” Connolly said. “He hired a hard-working crew that was dedicated to him and to all of us. Also, a special thank you to his wife, who worked behind the scenes.”

John Chi, MD, MPH, director of Neurosurgical Spinal Cancer in the Department of Neurosurgery, said stopping into Pat’s Place for coffee or a sandwich never failed to brighten his day.

“It’s not fancy. It’s not glitzy. But that’s what makes it great,” said Chi, a regular for 13 years who, as a Philadelphia native, stands by the café’s steak-and-cheese sandwich as its winning menu item. “The guys who work there are terrific. We’ll talk about football on Monday mornings during football season. I show them pictures of my kids. I’m going to miss that camaraderie.”

And when Brigham staff haven’t able to come to Pat’s Place, it hasn’t been uncommon for Pat’s Place to come to them, the younger Pat said. It’s all part of the café’s commitment to supporting the Brigham community, he added.

“A lot of the doctors get so busy in their clinics and can’t go out for lunch, so I still bring food down to them every day,” Pat Jr. said. “The people are what make this place so special. The guy who comes in and takes my trash is just as important as the president of the hospital. You see how hard people here work. They are so dedicated.”

Even after preparing countless meals for patients, visitors, staff, donors and members of the local community for more than 40 years, Pat Jr. said food is often the last thing he thinks about while on the job. In fact, his favorite meal is decidedly off-menu — his wife’s home cooking, which he looks forward to enjoying more often.

31 Responses to “Pat’s Place at 15 Francis St. to Close July 31, Leaving a 46-Year Legacy of Hearty Food and Friendships”