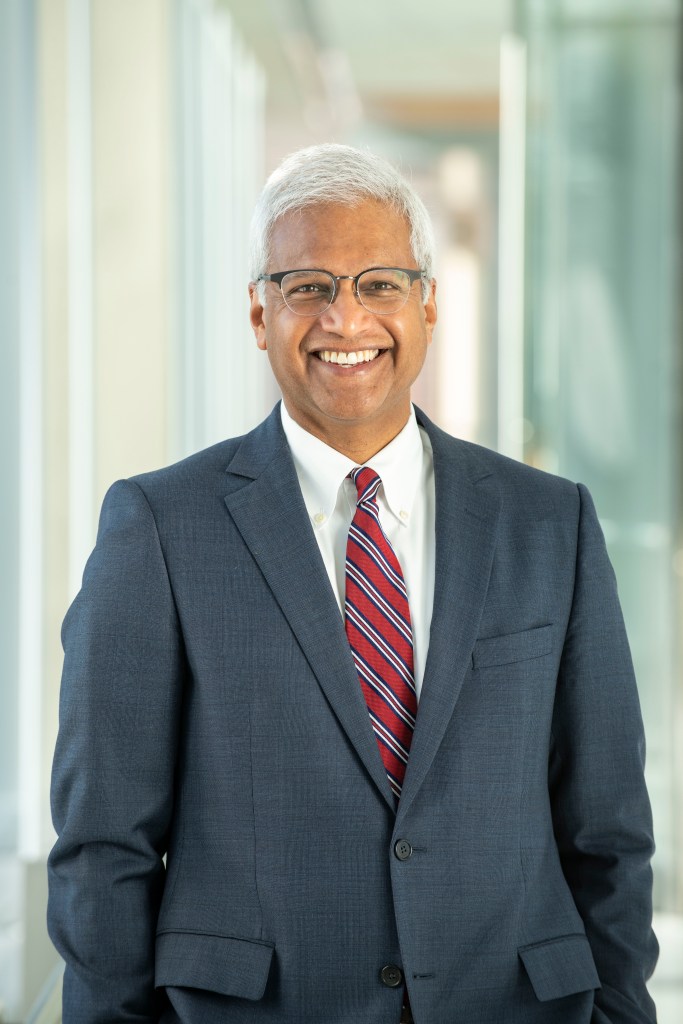 “It always feels like coming back home here,” says Sunny Eappen on his relationship to the Brigham.

When he joined the Brigham as an anesthesiology resident, Sunil “Sunny” Eappen, MD, MBA, felt he had found his community — one full of people who led with compassion, empathy and heart.

He continued to nurture that connection throughout his career, even as his work took him in new directions. After residency, he stayed on as an attending anesthesiologist at the Brigham, working in a basic science lab in the Medical Research Building for his first three years and eventually went on to serve as vice chair of Clinical Affairs for the Department of Anesthesiology, Perioperative and Pain Medicine. Years later, while in leadership roles at Mass Eye and Ear, he continued to work regularly at the Connors Center for Women and Newborns to practice as an obstetric anesthesiologist. When he received the call in 2018 to serve as the Brigham’s chief medical officer — a position he maintains today — the path forward was clear for him.

Now, reflecting on his appointment as interim president in March and his first three months in the role, Eappen says he can’t imagine being anywhere else.

“It always feels like coming back home here,” he said. “Intellectually and academically, the Brigham is one of the top places in the world to practice. But what really sets us apart is that the people here are incredibly kind, caring and compassionate. That’s what brought me here as a resident. It’s what brought me back as CMO. And it’s what makes this role I’m in now feel like such a privilege.”

This longtime connection has shaped Eappen’s understanding of the Brigham’s culture and what matters to the people who work here. As interim president, he emphasized that his focus is on ensuring staff feel heard and supported, advancing the Brigham’s mission and goals, building greater transparency into institutional and systemwide processes, continuing to build momentum around equity and enhancing the patient experience through greater system integration.

“I feel like I have a great advantage because I’ve lived and grown up in the Brigham,” he said. “These are people I’ve known for the last 25 years — whether they’re folks in the cafeteria, Operating Rooms, Emergency Department or on our floors. We don’t have a shy group here, so when I walk down the hallways, people come up and tell me what they’re thinking, which is fantastic because this role has given me an opportunity to make a difference in a new way.”

Recently, a staff member suggested to Eappen that the members of the Brigham’s Board of Trustees should be identified on the hospital’s website — an increase in transparency that was quickly implemented. When a group of residents expressed their interest in sharing their lessons learned from the front lines of the COVID-19 pandemic, they were invited to participate in a deeper conversation with Eappen about what could be incorporated into future emergency preparedness work. In recent weeks, Eappen has also been meeting with members of the Brigham research community to better understand what’s needed to support the next wave of innovation and discovery.

As CMO, many of his priorities overlapped with the president’s office, so certain aspects of his new role are familiar to him. Now, the scale and scope are bigger, and there is also new and evolving work, particularly as the MGB system collectively moves toward greater alignment. To understand and meet these new challenges, Eappen has been able to build on existing relationships with leaders, faculty, staff and trainees across the Brigham and Mass General Brigham (MGB).

“It’s been a learning experience,” Eappen said. “As we’ve seen, there’s just so much change happening at our system level and it affects what we do at the academic medical center level. For me, it’s really been about integrating where we are trying to go with how we get there, how we retain our unique identity and how we can play a leadership role within the system.”

Eappen explained that achieving a fully integrated system of care across MGB will require change, which can sometimes feel uneasy, he acknowledged, but also has the potential to be transformative for employees, patients and local communities.

“One important point to understand is that being part of a system doesn’t mean we’re going to lose our culture,” he said. “The second part is that there’s a really — I mean, really — compelling reason to do this. We aren’t delivering the best patient care possible to our patients until we can fully realize this opportunity.” 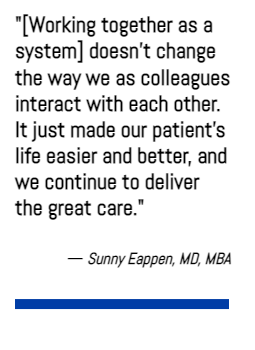 Consider these scenarios, Eappen said: A Brigham patient trying to make a cardiology appointment discovers his physician is booked up for the next six weeks, but perhaps there is an appointment available at Massachusetts General Hospital the following week. Or a Brigham patient who lives in Newton needs a chest X-ray; getting it performed at Newton-Wellesley Hospital might be considerably more convenient than driving to the Brigham.

“It doesn’t change our interaction with the patient. It doesn’t change the way we as colleagues interact with each other. It just made our patient’s life easier and better, and we continue to deliver the great care,” Eappen said.

The power of “systemness” extends beyond patient care. The progress and energy behind addressing structural racism and advancing equity — both at the Brigham and across MGB — have been particularly exciting to see in recent months, Eappen said.

“Our nation has had this reckoning with the fact that we haven’t made as much progress as a lot of people felt we had,” he said. “The iron is hot, and we need to capitalize on that movement as an integrated organization across our city. And we can’t slow down — we have to keep working on it. The organizational structures we’ve created here and across MGB are really important now. This is not a temporary initiative. This is a long-term commitment for us.”

Transparency and goal-driven action are two founding principles to this work, he added.

“It comes down to this: How do we make the health of everyone in our community better? We know institutional racism exists everywhere, including here, so what can we tangibly do to measure and eradicate it?” Eappen explained. “For example, we’re looking forward to sharing our diversity data across our departments and hospital-wide, and what we’re striving to achieve in each of those areas.”

Caring for the community includes caring for ourselves, which is why staff wellness and mental health have also been a priority, Eappen said. Senior leaders at the Brigham are exploring pilot programs around behavioral health that he hopes can become a model for systemwide improvements.

“I’ve seen what happens when people aren’t taken care of — through COVID and even before that. We’ve got to take care of ourselves first to be able to provide great, kind, compassionate world-class patient care,” he said. “In terms of benefits, I’ve felt that we don’t deliver the same level of behavioral and mental health care for our employees as we do on the medical care front, and I believe that we can be better on that.”

Walking the Walk on Self-Care

When it comes to self-care, Interim President and Chief Medical Officer Sunny Eappen, MD, MBA, practices what he preaches.

“I try to exercise three times a week and walk a lot, which is a great activity for me,” he says. “I also read every night for about 20 to 30 minutes — fiction, largely. I’ve done this since I was 12 years old. It’s my opportunity to escape, in a way.”