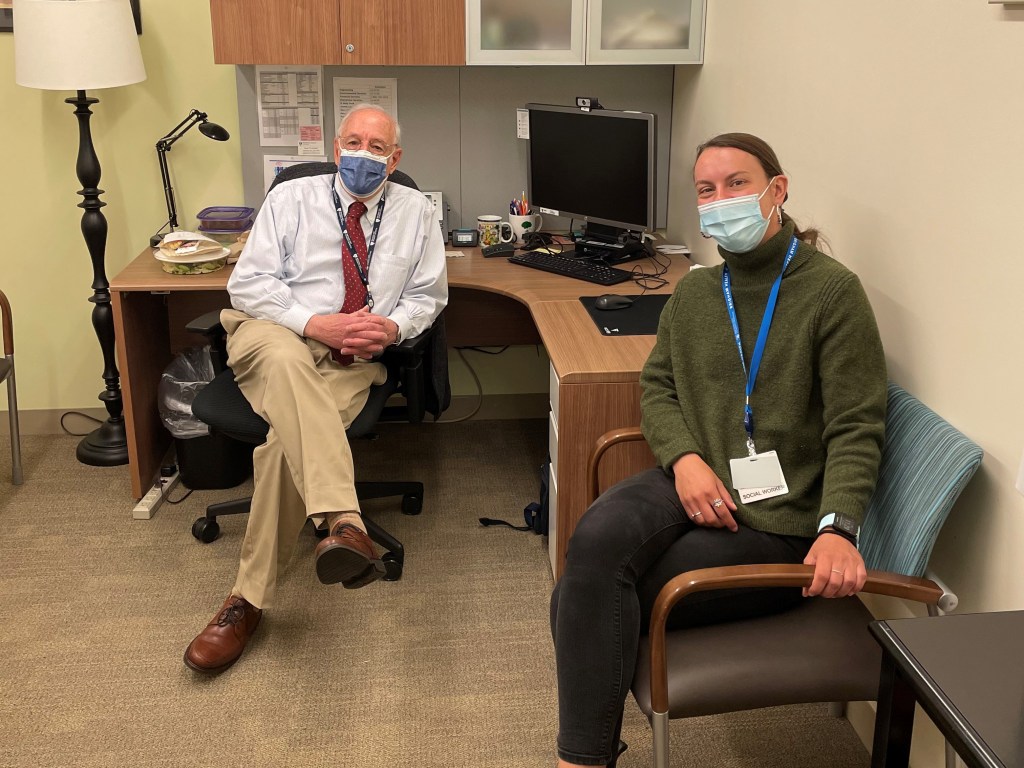 Jeffrey Robbins and Noemie Bechu meet in person for the first time, and say goodbye, on the final day of Bechu’s internship.

Coming into her clinical social work internship this fall, Noemie Bechu had no idea what to expect. She would be fully remote for the duration of her internship in outpatient Neurology, where she would work under the supervision of a Brigham social worker to perform assessments and counsel patients with dementia, epilepsy and traumatic brain injuries.

The experience turned out to be one of the most challenging and rewarding experiences she’s ever had, said Bechu, one of eight graduate students who made up the Brigham’s first class of Social Work interns after the pandemic’s initial surge, completing their program on April 30.

Social work trainees who had been placed at the Brigham for the 2019–20 academic year had their internships cut short in March 2020 when the hospital paused many educational programs as COVID-19 began to spread in the Boston area.

For the cohort who joined the Brigham this past fall, the experience was filled with the usual mix of excitement and uncertainty surrounding a new internship — learning how to work in a large academic medical center while also taking on their own patients for the first time. But it was also coupled with the added challenges of pandemic, chiefly learning to accomplish many of these tasks remotely.

“I don’t think I could have learned more in this internship experience,” said Bechu, who trained under the supervision of Jeffrey Robbins, LICSW, a senior social worker in the Department of Neurology. “I started this internship with not a lot of confidence in my clinical skills, and I’m leaving with so much more confidence. That’s very much thanks to Jeff and how supportive he was as a supervisor.”

Robbins said he was continually impressed by Bechu’s flexibility, growth and dogged commitment to finding creative solutions to support patients and families.

“I know that an intern has a good year and good supervision from me when I get at least as much out of the experience — if not more — than I give,” he said. “Supervision is a two-way street — people bring their own unique perspectives and the sum of their own life experiences into their internship here, and if I’m not learning from a student then I feel like I’m failing as a supervisor. Noemie was not only a trooper this year, but she was also just fabulous at her work and grew exponentially.”

Catherine Arnold, MSW, LICSW, ACHP-SW, manager of Education and Professional Development for Social Work, said the training program’s supervisors, also known as field instructors, and Social Work’s Field Education Committee did a tremendous amount of work over the summer to ensure supervisors and interns alike had ample support structures in place. She said she was not surprised to see both supervisors and interns rise to the challenges of this past year and thrive.

“Social workers are used to thinking outside the box and being creative with limited resources,” said Arnold, who also serves as manager of Palliative Care Social Work. “Social workers are able to embrace ambiguity, and this was a year they were called on to do that — and they stepped right up.”

Andrea Johnson, MSW, LICSW, director of Social Work, expressed her appreciation to the education program’s field instructors, interns and leadership for their dedication and flexibility this past year.

“I cannot begin to express how excited I am about the continued success of the Field Education Program,” Johnson said. “Even in the face of the pandemic, both field instructors and interns embraced their responsibilities as providers in a very complex and ever-changing workflow.”

Despite the steep learning curve in the beginning, Bechu said she soon got acclimated and even found that working remotely provided opportunities to enhance her practice. While helping one patient with housing assistance over Zoom, she was able share her screen and go over the application form in detail with them. During a session with another patient, Bechu realized that seeing her own face on video was unexpectedly informative.

“Seeing my eyes widen with surprise in response to something the patient said gave me a chance to reflect on whether that was an appropriate expression, which isn’t something I would really be able to see in person,” said Bechu, who will earn her master’s degree from Boston University this month.

When this year’s class of interns began in September, all were fully remote. Some, such as Bechu, stayed remote throughout their internship because the unit, service or clinic where they were placed was also operating in a remote capacity. Other interns such as Dennis Falcione, who completed his training in Lung Transplant and Thoracic Surgery, began their internship remotely and eventually transitioned to on-site work.

“None of us could have imagined what this past year would look like, what we’d be able to do and how we’d have to overcome these challenging circumstances,” said Falcione, who will obtain his master’s from Boston College this month. “On the flip side, doing this in the grips of a pandemic and having to be adaptive has been a great learning opportunity. Especially as I get ready to enter the field, I feel like I’ve gained such a solid foundation to build on as a social worker.”

Having the support of a caring and encouraging supervisor was pivotal to making this year successful, said Falcione, who trained under the supervision of Beth Flanzbaum, MSW, LICSW, a clinical social worker in Thoracic Surgery and the Mesothelioma Program.

“It would be impossible to do all this without that extra support to navigate complex situations as you’re trying to get a feel for the work,” he said.

Flanzbaum said it filled her with pride to see Falcione grow so much as a social worker in just a few months.

“I think this is going to be one of the most resilient groups of social workers there is,” she said. “These interns flourished. I don’t know how they did it, but they did. They got a solid foundation in hospital social work. They figured things out and invented new ways of doing things. And they developed a lot of resiliency in the process, which I think will help them as they go forward into the field.”