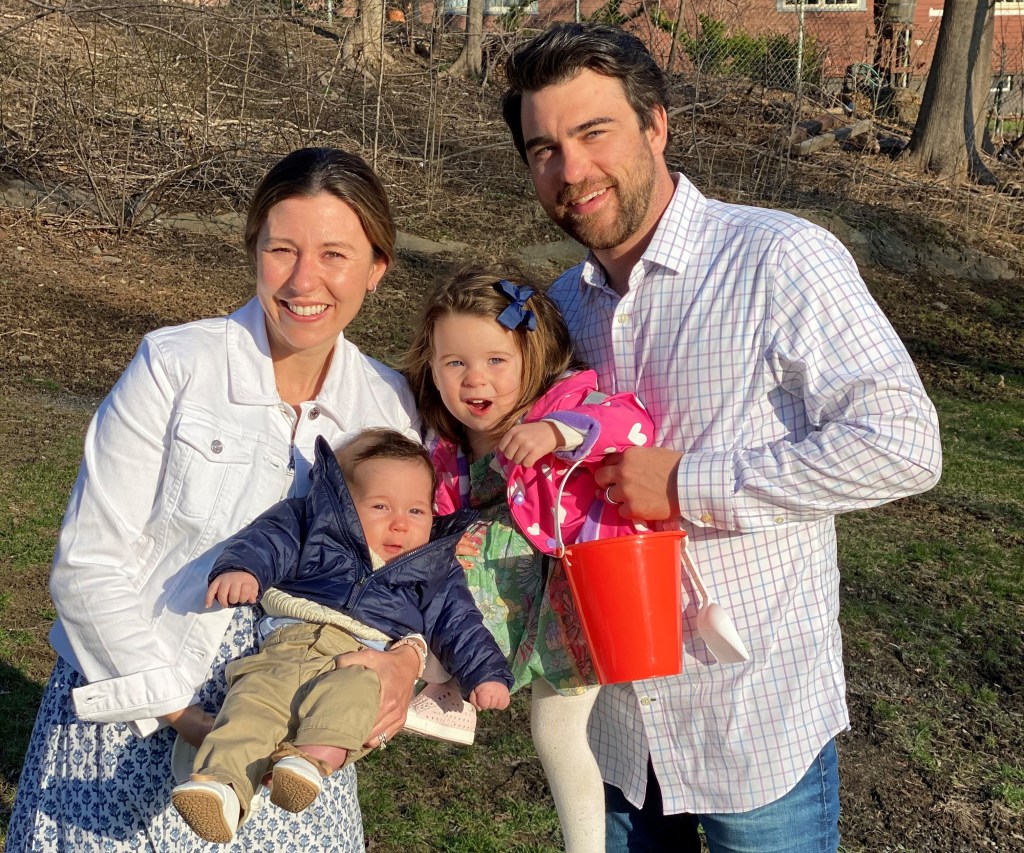 Alex and Tim Lieto with their children, Luca and Faith, outside their New Hampshire home

She still gets choked up remembering what it was like to hold her firstborn, Faith, now 2 and a half. After more than two years of fertility treatments, six pregnancy losses and unfathomable heartbreak, arriving at that moment with her husband, Tim, 34, felt like a dream — one they almost couldn’t believe had come true.

“There are no words,” Alex said through tears, recalling their experience in Labor & Delivery at the Brigham. “The second she came out, I was like, ‘She did it. We did it. I can’t believe we did it. Is this really happening? Thank God.’”

This Mother’s Day is even sweeter for the Lieto family, who recently celebrated the birth of their second baby — a boy, Luca, now 5 months old.

“There’s a heck of a lot more laughter in this house with them here. Even when things are really crazy with the kids, we never complain. Just being with them — and being a family — is something we never take for granted,” Tim said. “Al is a fantastic mom, and seeing her have the chance to be one is all we could ask for.”

Reflecting on the profound losses they have experienced over the years, Alex acknowledged that Mother’s Day also remains a somewhat bittersweet holiday.

“Before I had my kids, there was a handful of really hard days — Christmas, New Year’s, birthdays. Mother’s Day was the hardest of all,” she said. “The fact that they’re here is frankly surreal, and while I feel so blessed to be able to celebrate this day with them, my heart breaks for the women who are struggling because I know their pain.” 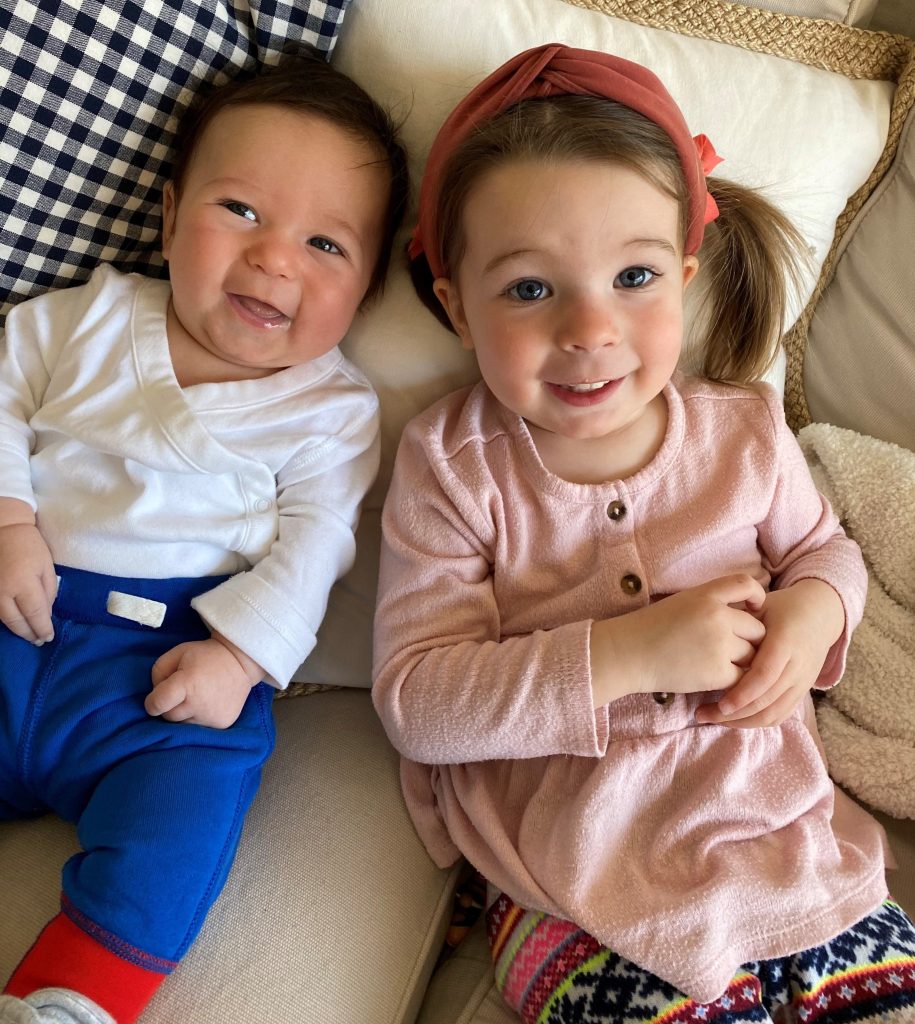 “There’s a heck of a lot more laughter in this house,” says Tim Lieto of his children, Luca and Faith

Guiding and supporting the Lietos on their path to parenthood over the past six years was Antonio Gargiulo, MD, a reproductive endocrinologist and surgeon at the Brigham’s Center for Infertility and Reproductive Surgery.

Gargiulo, whose team performed several rounds of in vitro fertilization (IVF) for the couple at a Mass General Brigham-affiliated satellite in Exeter, N.H., said this was one of the most challenging, and ultimately heartwarming, cases he has worked on his 25 years in the field.

“This was a particularly hard-fought battle,” he said. “The humbling and inspiring part of this for me, as a provider, is seeing how these two people never lost hope. We’ve had many very difficult discussions and a lot of tears through the years, but the reality is our team knew they were going to be successful because of their attitude, dedication and the fact that they made this their No. 1 goal.”

More than just providers, Gargiulo and his multidisciplinary colleagues truly became part of their team, the Lietos said. “He’s part of our family, and he treated us like family,” Alex said.

‘A Whole Other Level of Loss’

Originally high school sweethearts, Alex and Tim married at 25 and knew that they would soon want to start a family. After struggling to conceive naturally due to male-factor infertility, they began pursuing IVF.

Initially, the procedure seemed promising. Egg retrieval and fertilization went smoothly, and Alex got pregnant right away. Within a few short weeks, however, she suffered a miscarriage. They waited and tried again — and saw the same outcome, over and over.

On their fifth round of IVF, they pursued additional screening to ensure a genetically healthy embryo was implanted. After they passed the first trimester, the couple allowed themselves to exhale. They excitedly began picking out names for a boy or girl.

But at 19 weeks gestation, they experienced their most tragic loss of all — a baby boy they named George. The grief was incomparable to anything they had gone through previously.

“It was a whole other level of loss,” Alex said. “We assumed we were just the unluckiest people ever.”

Alex and Tim delivered George at the Brigham in 2016, and the extraordinary compassion their Maternal Fetal Medicine care team demonstrated touched them deeply.

“The care we received during that delivery was amazing,” Alex said. “The nurse who delivered George impacted our life forever. After we went through that process, I realized there was no other place I’d rather deliver a baby and no other hands I wanted to be in. We always knew we had the best care in the world.”

Staff prepared a memory box for the family, including photos and other keepsakes, to honor baby George.

“It’s the worst day of your life. And then, all of sudden, you have this staff who are treating it not as the worst day but rather as an important day,” Tim said. “They said how beautiful he was and made us feel like it was going to be OK.”

Over the years, Alex and Tim said they explored countless explanations for their fertility challenges. They underwent medical and genetic tests and tried dietary changes, exercise regimens and more. They leaned on family, friends and their religious faith for strength. After experiencing yet another loss after George, they started considering options such as adoption and surrogacy. 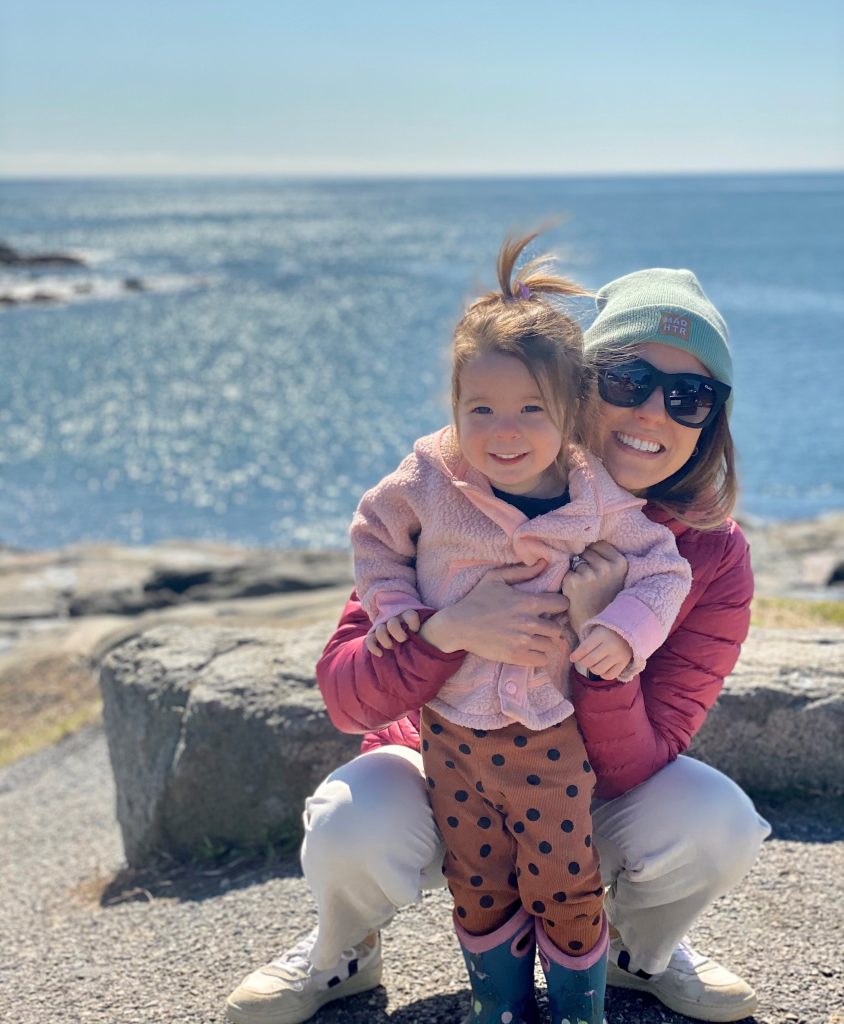 Alex shares a special moment with her daughter, Faith, on the beach.

Gargiulo told them he had one more idea. He reached out to a colleague in New York — and former Brigham resident — who specialized in recurrent pregnancy loss. After extensive testing, they discussed two peculiarities in Alex’s biology that otherwise weren’t affecting her health but might explain their hardships: She had a form of insulin resistance that caused blood sugar spikes, although not severe enough to make her diabetic, and an inability in her body to break down blood clots.

Alex began taking medications to address both issues, and they tried another round of IVF. From the beginning, the odds did not seem to be in their favor. Of the 12 eggs retrieved, only two fertilized. Just one tested as genetically healthy.

The Lietos braced themselves for another heartbreak. But as the weeks went by, Alex’s pregnancy was closely monitored by her Maternal Fetal Medicine care team and continued to progress without major complications. Nine months later, they welcomed baby Faith into their arms.

Despite all they had to overcome, the couple say they never lost faith in their dream — the very sentiment that inspired their daughter’s name.

“We always kept hope,” Tim said. “We knew, one way or another, we were going to have a family.”

It’s a message the Lietos hope will resonate with other families experiencing similar challenges.

“I always had to dig a little bit deeper and find the strength I never knew I had. You can too. Don’t give up,” Alex said. “We always say to each other the only way out is through. All the losses we had were so that we could get to Faith and Luca. Do I want to do it again? No. But would I to get them? Every day for the rest of my life.”

3 Responses to “A Mother’s Day to Remember: After Heartbreaking Losses, a Couple Treasures Their Sweetest Gift — Family”