The climate is warming due to human activity, and from the perspective of Brigham primary care physician Gregg Furie, MD, the hospital’s renewed focus on addressing the implications of climate change for health care could not come at a more critical time.

“I’m grateful to the leadership of the institution who recognize that the close linkages between climate change, health care’s environmental impacts and human health really compel us to action,” said Furie, one of four experts who participated in a discussion on climate change and sustainability during the second Lead the Change forum on Earth Day, April 22. “They’ve signaled a commitment to effecting change at the Brigham and beyond, which I think will help protect the health of our patients, populations more broadly and the planet that supports them.”

The event was moderated by Bernie Jones, EdM, vice president of Public Policy and co-chair of the Brigham’s Climate Action Council, who opened the forum by announcing that Furie, a member of the council, will step into the new role of medical director for Climate and Sustainability at the Brigham.

“The consequences of global climate change we know are far reaching,” Furie said. “They’re already being felt not just across oceans, but right here at home. And while the cost of achieving aggressive reductions in greenhouse gas emissions is significant, it really pales in comparison to the cost of doing nothing.”

Jones also announced that the Mass General Brigham joined We Mean Business, a coalition of over 300 businesses catalyzing business action and driving policymakers to accelerate the zero-carbon transition. On Earth Day, We Mean Business called for the Biden administration to reduce emissions by at least 50 percent below 2005 levels by 2030. President Biden agreed to that target on the same day.

To reflect how close to home climate change is occurring, panelist Renee Salas, MD, MPH, an Emergency Medicine physician at Massachusetts General Hospital, recalled working a shift on a record-breaking hot day in Boston and saw a patient who was experiencing a fever. The patient’s wife had called 911 because he was acting confused. 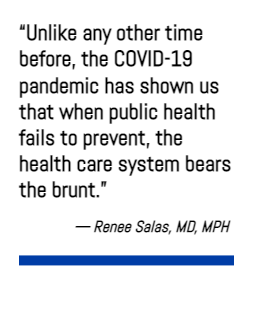 Knowing how extreme the weather was that day, Salas was skeptical that the fever was due to a conventional cause, such as a virus or infection. The emergency medical services (EMS) crew who transported the patient said that the patient and his wife had walked up many flights of stairs to reach the upper level of their apartment building.

When first responders opened the door to this patient’s apartment, they were struck by a wave of heat. The couple only had a window that was partially cracked. There was no air conditioning. Salas found that the patient’s core body temperature was 106 degrees Fahrenheit — making it clear that he was suffering from a heatstroke, a life-threatening form of heat illness.

“I often think about that patient, but I also think about his wife because she was left behind in that very same environment,” Salas said. “That really started making me think about how we need to begin applying what I often call a ‘climate lens’ to our clinical practice.”

Climate change and extreme weather can cause catastrophic health effects, such as vector-borne diseases, water-borne illnesses and heatstroke, which can lead to cardiac and respiratory disease.

Panelist Jodi Sherman, MD, an anesthesiologist and the medical director of Sustainability at Yale New Haven Health, remembered noticing as a trainee that her hospital was using and discarding many materials that could cause harm to the environment.

“That began my own journey of collaborating with environmental engineers and doing research to try and put some numbers behind what this harm is and to start making it better,” Sherman said.

“Globally, a quarter of health care services are deemed inappropriate or low value, meaning that they’re unneeded, unwanted, ineffective, unaffordable, inequitable and irresponsible in the consumption of resources. I would further add they cause preventable pollution,” Sherman said. “We actually found no correlation between health care access and quality and these emissions in the US. In other words, there are ways to reduce emissions without compromising health care quality and access.”

About 80 percent of these emissions come from supply chains, including pharmaceuticals, chemicals, medical devices and supplies, and food, Sherman said. She suggested that hospitals could improve climate change outcomes by using durable, rather than single-use disposable goods, and improving the environmental performance of the supplies, in addition to reducing wasteful practices.

Panelist Gaurab Basu, MD, a primary care physician and co-director for the Center for Health Equity Education and Advocacy at the Cambridge Health Alliance, noted that the consequences of climate change can be more severe for people in lower-income communities due to historic, discriminatory practices in housing, transportation and urban planning. He emphasized that individual actions must be married with systemic changes to be effective.

“We’ve got to be honest that we put fossil fuel infrastructure in some places, and not others — that we have not been thinking enough about the Black and brown children who are living across the Chelsea Creek and near the polluted water, and across the Tobin bridge, where they are exposed to air pollution, and making them go to the emergency room with asthma exacerbation instead of staying in school,” Basu said.

Salas said that climate action is a prescription for health and health equity. The speakers agreed that a climate lens is needed in every aspect of their work to understand the impact climate change has on their patients and practices.

“This is emotional, and big and overwhelming, and it can feel so paralyzing at times,” Basu said. “But what we need here is action. We need to do this together, and then to move forward to create an equitable, just, sustainable future.”

Save the date for the next Lead the Change events: