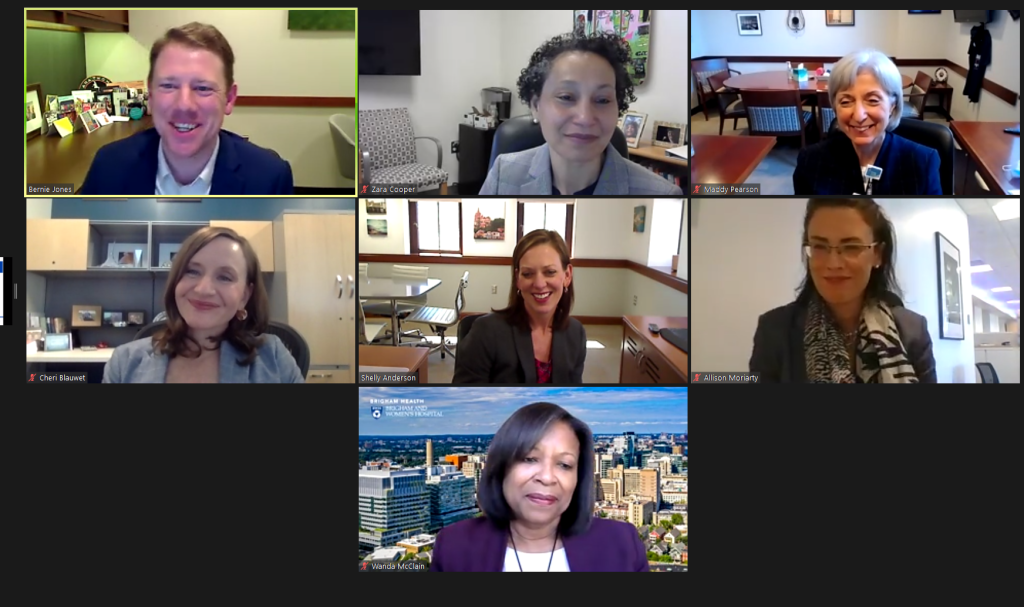 When reflecting on the complex balancing act that women in the workplace must often navigate, Zara Cooper, MD, MSc, FACS, Kessler director of the Center for Surgery and Public Health, finds comfort in a quote from Orpah Winfrey: “You can have it all. You just can’t have it all at one time.”

Those words of wisdom were among several inspirational quotes that female leaders at the Brigham shared to kick off a broader discussion about women’s experiences during the first Lead the Change forum on March 30. The new series’ inaugural event, held in conjunction with Women’s History Month, featured reflections from a panel of six leaders about the challenges and opportunities they’ve faced in their personal and professional lives.

Cooper — an acute care surgeon, trauma surgeon and surgical intensivist — said she has learned that having supportive family, friends and colleagues can make all the difference in personal and professional success.

“One thing that that has helped me is that I really let go of my pride and leaned on ‘the village,’” Cooper said. “At work, it’s recognizing that I’m part of a clinical and administrative team. COVID has also added this layer of transparency and humanity to all of us. Our co-workers see into our homes and see our children come through the door, and that’s actually improved and enriched the relationships I have here at work.”

“We all need to help each other to the next rung,” Anderson said.

The demands of supporting a family while juggling a career was a central theme that several panelists explored.

Allison Moriarty, vice president of Research Operations, recalled her decision to return to the workforce after taking some time off to raise two children.

“What I actually learned during that period was that I really missed being able to work, and I felt like working brought a really important balance to my life,” Moriarty said. “While I know there can be incredible pressures and strains that come from many different responsibilities, I’ve found that I’m a much better mother by virtue of having so much in my life professionally and socially.” 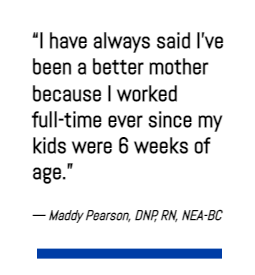 Maddy Pearson, DNP, RN, NEA-BC, senior vice president of Clinical Services and chief nursing officer, acknowledged the challenges of being a working mother — remembering how she was rarely able to stay home with her two children when the schools declared a snow day because, as a nurse, she was expected to report to work. At the same time, she added, the role-modeling that took place set a valuable example during her children’s formative years.

“I have always said I’ve been a better mother because I worked full-time ever since my kids were 6 weeks of age,” Pearson said. “In prepping for this conversation, I asked both of my children what they thought. I said, ‘I’ve worked all my life. Did you miss me?’ They said, ‘Of course we missed you, Mom. We love you.’ But they both articulated to me that they have grown and learned so much by seeing my professional life and how I balance both worlds.”

Panelists discussed the unjust expectation that society places on women to be the primary caregiver for children or other family members. Speakers also acknowledged that many working mothers face significant financial barriers, particularly given the steep costs of child care —an expense on par with college tuition. According to the Economic Policy Institute, Massachusetts ranks second in the nation for most expensive infant care.

“Our child care system now is so dependent on socioeconomic status. In sports, we say something is a pay-to-play system. It’s the same for child care,” said Cheri Blauwet, MD, a sports medicine specialist in the Department of Physical Medicine and Rehabilitation and the Department of Orthopaedic Surgery and director of the Kelley Adaptive Sports Research Institute at Spaulding Rehabilitation Hospital. “Some women have options while others don’t, and it’s so unjust and exacerbates all of the inequities that we’ve seen play out through COVID. These are very expensive services, and we could do better and emulate other parts of the world where the systems are quite different.”

Wanda McClain, MPA, vice president of Community Health and Health Equity, noted that working women may also be coping with other family responsibilities, such as elder care.

“We often don’t know what people are bringing into the workplace with them, so having that opportunity to be open and supportive of people within whatever stage of their life they might find themselves is really important,” McClain said.

Helping all staff achieve better work-life balance is an area where institutional culture can play a significant role, Anderson said.

“I think some of the culture work we’ve done around the Brigham Experience over the past couple of years brought up that. As a community, we’re perfectionists — we’re very ambitious and often take on too much,” Anderson said. “We’re all trying to be much more cognizant of what we’re putting on everyone’s plates so that we can all have more balance. It’s not a gender issue. It’s a workplace issue, and we need to look at it across the board.”

Panelists also explored the intersecting identities some women navigate in the workplace.

Blauwet, a wheelchair user, reflected on her experiences as a woman and physician with a visible disability, recalling how challenging it can be to be perceived as a one-dimensional identity rather than a complex, full person.

“I’ve seen that shift over the last five or 10 years. There’s been an increasing recognition of intersectionality adding value to our environment,” she said. “It’s been really encouraging to see that, and I hope it continues to evolve.”

Accepting one’s identity as a leader can also be an unexpected experience for many women, panelists said.

“Think about where you can make a difference,” Cooper said. “One of the things that’s been very refreshing is my imposter syndrome hasn’t gone away, even at this level. Everybody has it, so get over it. If you’re not going to be at the table, who is?”

The next Lead the Change event, “Earth Day Climate Change and Sustainability Forum,” will be held Thursday, April 22, at noon.