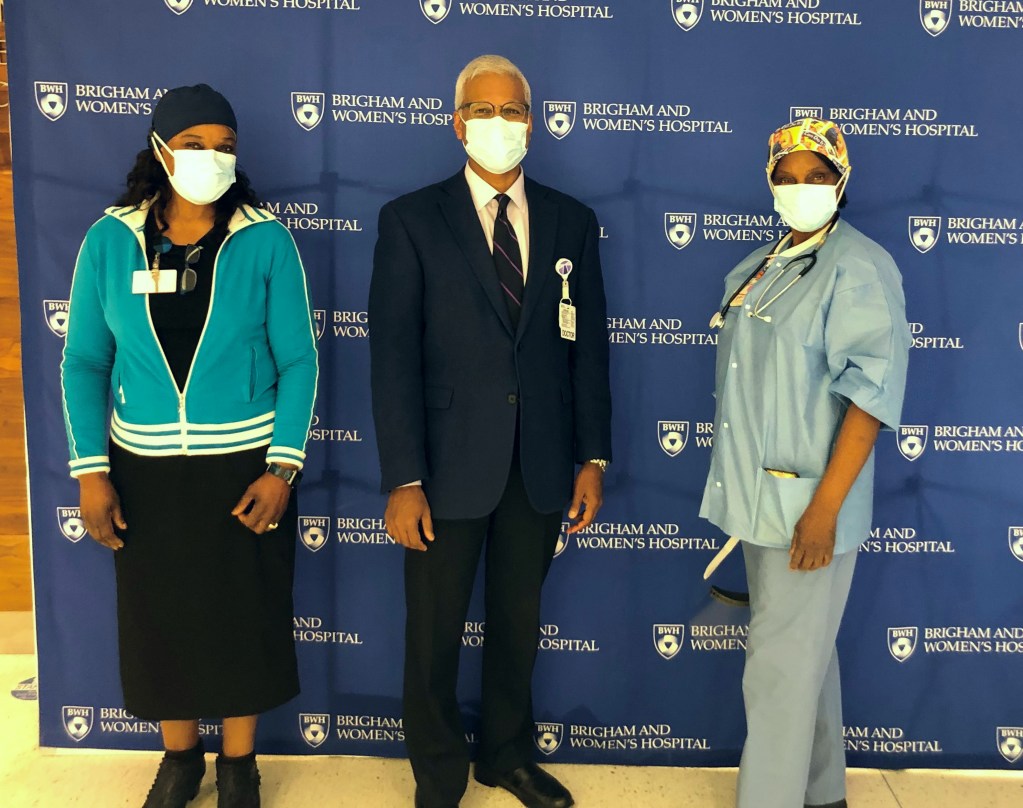 From left: Paulette Cooper, Sunny Eappen and Rosalie Bryan share a moment outside the Hale vaccination clinic after booking vaccine appointments for Cooper and Bryan.

Paulette Cooper, a patient care associate (PCA) on Braunwald Tower 8AB, was alarmed by what she was reading and hearing about the COVID-19 vaccine on social media and in the news this past winter.

“You heard people say it’s going to change your metabolism or that they’re going to put a chip in your body and track you. Maybe it sounds silly, but it was frightening,” Cooper said. “I remember watching the news and this woman from New York took it and got Bell’s palsy. That got me scared.”

As the Brigham started to roll out its employee vaccination program, Cooper agonized over what to do. In some moments, she was certain she would get the vaccine. But then her mind would race with “what if” scenarios and she decided, no, it wasn’t for her. She went back and forth in this pattern for weeks.

“I remember one day I was on the floor and ran into a co-worker who was so excited. She was saying, ‘Paulette, what do you think about the vaccine? I’m going to get mine today,’” Cooper recalled. “I said, ‘OK, you get it and tell me about it.’ I still didn’t know what I was going to do.”

All three COVID-19 vaccines being administered in the United States — Johnson & Johnson, Moderna and Pfizer-BioNTech — have been tested in large, diverse populations in clinical trials and shown to be safe and effective.

Health care workers became eligible in phase 1 of the state’s COVID-19 vaccination plan, which launched in December 2020. To date, about 75 percent of Mass General Brigham employees have received the vaccine. While that rate well exceeds the general population — about 32 percent of Massachusetts residents have received one dose — it still means about one in four employees across the system have chosen not to get vaccinated or remain undecided.

For some who are unsure about receiving the vaccine, unanswered questions about how it could affect certain health conditions, such as pregnancy, remain a significant concern. For others, misinformation on social media about possible risks has created seeds of doubt. The speed of the vaccine’s development, as well as cultural or religious perspectives, have also led some to distrust it. For some people, the reality that the vaccine is so new may be reason enough for discomfort.

But there is also a population of COVID-19 vaccine “converts” — those who were once reluctant and then chose to get vaccinated after learning more about the science. 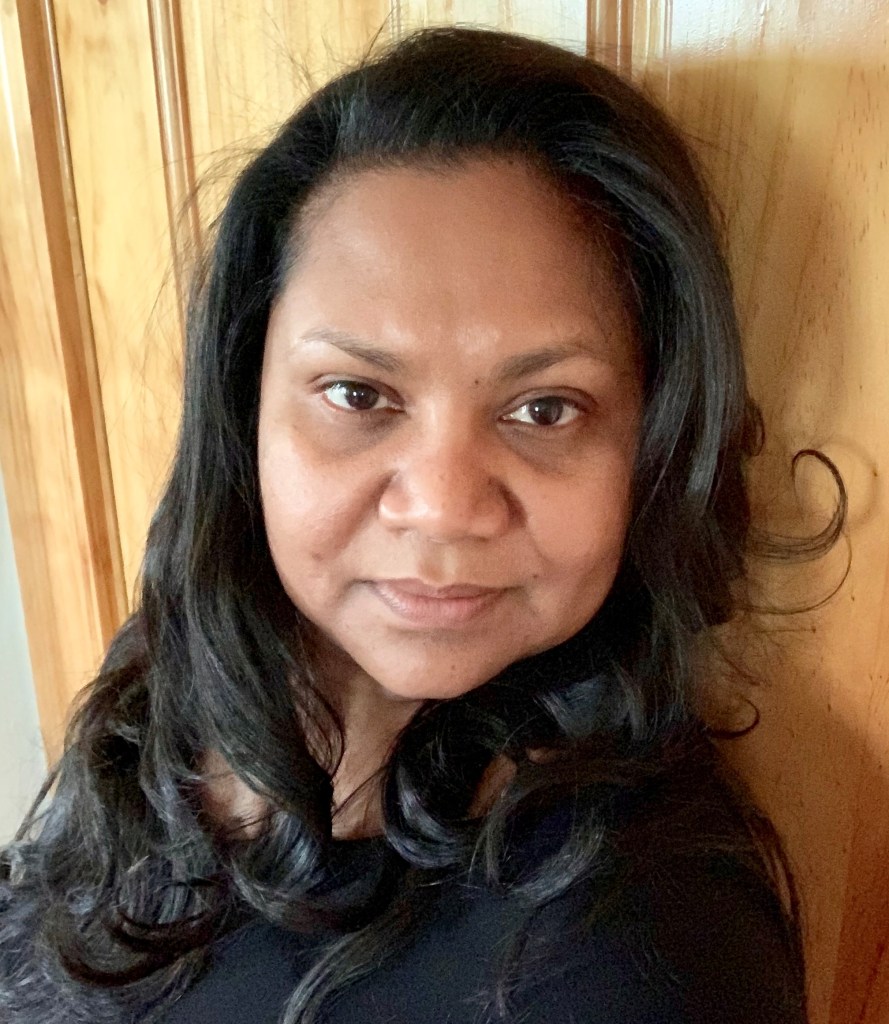 “In deciding whether to get the vaccine, I went from skepticism to certainty,” said Linda Harkess, MSN, RN, a nurse on Braunwald Tower 11ABD. “My skepticism stemmed from who I am, coupled with my experiences as a patient. I am an immigrant and a person of color — someone who has been on the receiving end of culturally incompetent care and a stereotype on numerous occasions, leading to a lack of trust in the health care system.”

As Harkess witnessed patients in a similar demographic to her die from COVID-19 at a disproportionately higher rates, she said she was initially leery of claims about the vaccine’s safety and decided against getting it. But as time went on, she kept an open mind and challenged herself to learn more.

“I was curious as to why a certain population of people are more susceptible to contracting and succumbing to this deadly virus. That curiosity provoked me to examine the affected population more closely,” Harkess said. “I focused special attention on the high-risk criteria, the clinical trials and the scientist who developed these vaccinations. I also studied the mRNA mechanism of action and how it counteracts the SARS-CoV-2 virus, the possible side effects and benefits of the vaccine and long-term illness from the COVID-19 disease. After a thorough review of reliable resources and learning the pertinent facts about the vaccine and the deadly COVID-19 disease, I made the informed decision and became the first member of my household to be vaccinated.”

‘I Have That Extra Protection Now’

Even after talking to more colleagues and family members about their experiences with the vaccine, Cooper still found herself conflicted — that is, until she and several of her colleagues received a visit at work from an employee vaccination taskforce comprising several clinical and equity leaders at the Brigham. Over the past several months, the group has reached out to groups of staff to answer questions about the vaccine, hear their concerns and help separate myth from fact.

Cooper attended the educational session with her sister, Rosalie Bryan, who is also a PCA on Braunwald Tower 8AB and was, at the time, even more reluctant about getting vaccinated. They both listened eagerly to medical experts in the room, led by Sunny Eappen, MD, the Brigham’s interim president and chief medical officer.

“I was afraid I would die if I took the vaccine,” Bryan said. “I told the doctor that I didn’t know what to do because the media has been saying all these things, and you don’t know what road to choose. But when he came and broke it all down, I felt a lot better. I said to him that I would take it, but I was scared to go.”

In response, Eappen offered to go with her. Bryan and Cooper looked at each other and smiled. “I said, ‘OK, let’s go,’” Cooper recalled.

After the session ended, Eappen accompanied them to the vaccination clinic in the Hale building to help schedule their appointments. The two sisters are now fully vaccinated.

Cooper agreed. “I feel safer. If I’m exposed to the virus, I know I have that extra protection now to help me,” she said. “Having the doctor break it all down helped me understand the vaccine better, and my sister helped me make up my mind too. All my family was getting it at that point, and I said I’m not going to be the only one left.”

As a resident in Obstetrics and Gynecology, Alice Abernathy, MD, has witnessed firsthand how COVID-19 has affected women during pregnancy and childbirth. 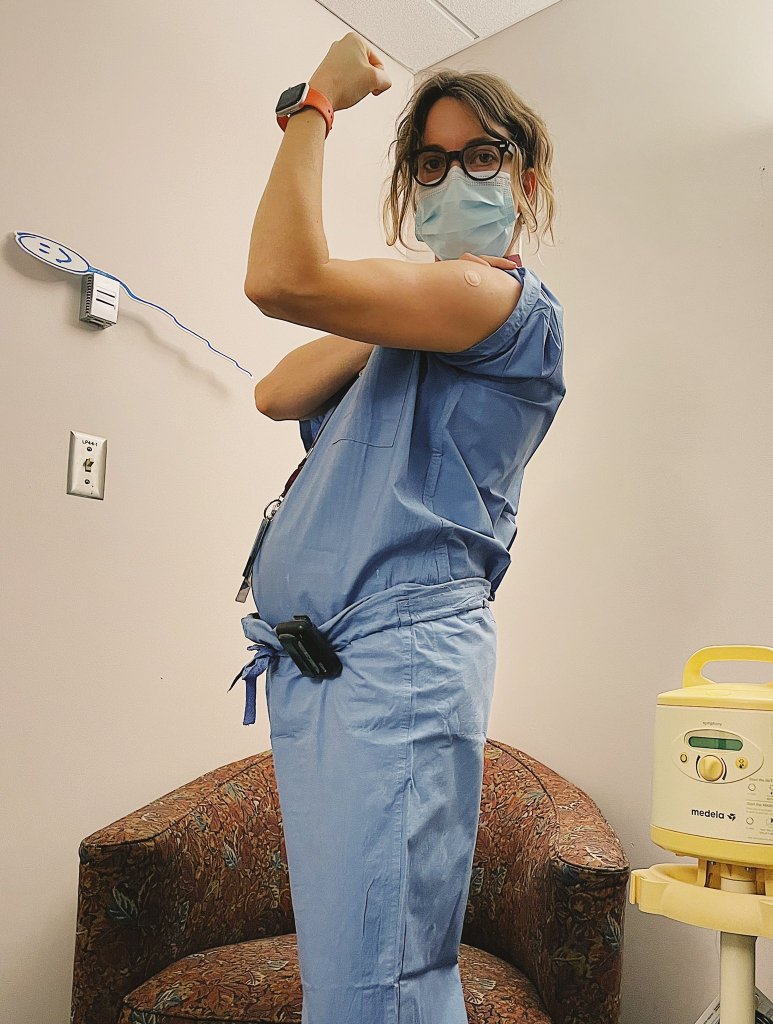 At 24 weeks pregnant, Alice Abernathy decided to get the COVID-19 vaccine. In this January 2020 photo, she celebrates receiving her second dose a few weeks later.

“I carefully monitor our pregnant patients, and not uncommonly I gown up, put on my N95 mask and wheel a patient to the intensive care unit for respiratory support,” Abernathy recently wrote in a column for Brigham Clinical & Research News. “The data, reports and articles informing their care buzz constantly through my brain. I can recount in excruciating detail each patient’s clinical decline to intubation and all the steps that lead to delivery by Caesarean section while the mother remains passive, sedated on a ventilator.”

As a pregnant person herself, this knowledge has also hit especially close to home.

“I look closely at these future parents — their bellies often similar in size to my own — and I fear for them and for myself,” she wrote. “Their faces remain with me. I wonder, could I too be a patient for whom pregnancy ends with unknowingly experiencing the birth of my first child?”

When the Brigham first offered the vaccine to employees, Abernathy found herself reluctant. Pregnant women are at higher risk for a severe form of the disease, and infection also increases the risk of preterm birth. Yet none of the vaccine trials had included pregnant or lactating women — a common practice in clinical trials — leaving her with unanswered questions about if or how the vaccine could affect her baby.

After doing more research and speaking with colleagues in maternal-fetal medicine and reproductive infectious disease to weigh the benefits and potential risks, Abernathy made her decision. At 24 weeks into her pregnancy, she received the vaccine.

“I promptly felt tears well up in my eyes. I suddenly realized that the weight of the fear I was carrying, and diligently ignoring, was slowly receding,” Abernathy wrote. “I felt overwhelmingly privileged to be offered the vaccine and to have the opinion of my colleagues to help guide my decision to take the vaccine.”

More information about COVID-19 vaccination for staff is available on PikeNotes.

One Response to “What Changed Your Mind? Previously Reluctant Staff Reflect on Decision to Get Vaccinated”