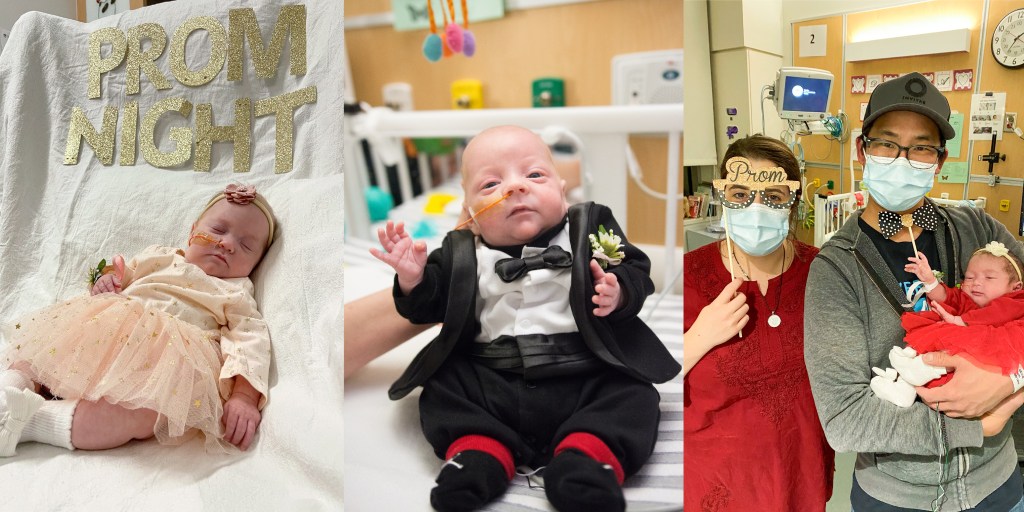 From left: Baby Maddie, Baby Alex and Baby Della, with her parents, get all dolled up for “prom night” in the NICU.

Before the pomp and circumstance of graduation come the festivities of prom night — and with it an opportunity to celebrate an important milestone in style. On the eve of their graduation from the Brigham’s Neonatal Intensive Care Unit (NICU), three infants and their families did just that in the most adorable fashion.

Babies Alex, Della and Maddie — whose families met and bonded while the three infants were receiving care in the NICU’s Growth and Development Unit — got glammed up for their own version of prom night on March 9, thanks to a team of creative and compassionate NICU staff.

When Maddie had enjoyed a successful feeding session after some previous difficulties, Duggan joked that Baby Alex could take her to prom as a show of support for her upcoming graduation from the NICU. As the families had also formed close ties with Baby Della’s family in the Growth and Development Unit — where each baby is assigned a bed space in different areas of a shared room — it was only fitting that Della also join the festivities.

“The moms found the concept comical, but also it ignited an idea — why couldn’t they have a NICU prom?” said Sawyer. “Our parents and their babies don’t often have ‘typical’ birth stories. We in the NICU celebrate every moment and milestone, as we recognize it’s important for parents to know that their infants are making progress. ‘NICU prom’ just seemed like an ideal way to celebrate all of the infants’ and parents’ hard work before they ultimately graduate from the NICU.”

Mascoli purchased supplies and props to set up a makeshift photo booth, which she decorated with the help of NICU physical therapist Tricia Flynn, PT. The families brought formalwear for their little ones, and Sawyer’s sister, a student in floral design school and former Brigham nurse, fashioned miniature corsages and a boutonniere.

Maddie’s mother, Eliza, expressed her gratitude to the care teams for devising such a special and heartwarming way to celebrate the families’ next chapter.

“Our NICU team brought in decorations and accessories, had customized corsages and a boutonniere made, and were able to celebrate our incredible infants with us,” Eliza said. “Of course, all three babies fell asleep almost instantly, but they were still completely adorable in their dresses and tux! We will never forget the NICU prom as a very bright spot during an emotional journey. To say that our care team is amazing is an understatement. They are now friends for life.”

Sawyer said that staff were grateful to help create a magical moment for the families.

“For these parents, it was a night of laughter that followed many days of a stressful hospital admission and an experience they can carry with them throughout the days ahead,” she said. “Since COVID-19, we have had to change so much, including how families interact with each other. They no longer have a dedicated parent lounge where they can meet other parents and reflect on what each other is going through. These three sets of parents have forged a unique bond from behind curtains and masks where they cheer on each other’s infant and the milestones they accomplish.”