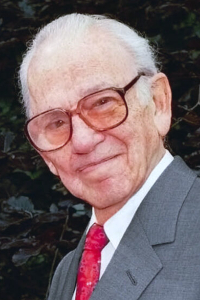 The Brigham community mourns the loss of Carl J. Shapiro, a distinguished philanthropist and longtime supporter of the Brigham, who died on March 7. He was 108 years old.

Mr. Shapiro and his late wife, Ruth, created the Shapiro Family Foundation in 1961, and were well-known in Boston and beyond for their abundant generosity and dedication to advancing health care, education and the arts.

“Through their extraordinary generosity and vision, Carl and Ruth Shapiro displayed an unwavering commitment to the Brigham for more than 30 years. Their legacy will endure in our community for generations to come,” said Sunil Eappen, MD, MBA, interim president and chief medical officer.

The Shapiro family’s most recognizable contribution was a momentous 2005 gift that supported the construction and establishment of the Carl J. and Ruth Shapiro Cardiovascular Center — enabling an effort to transform cardiology care at the Brigham.

In addition, the Shapiro family’s gifts have supported several initiatives across Emergency Medicine, Oncology, Women’s Health and many other vital research and education programs.

“Carl and Ruth’s legendary philanthropy has helped the Brigham dramatically transform care for countless patients and their loved ones,” Eappen said.

Born in Boston, Mr. Shapiro began his career during the Great Depression — leaving his studies at Boston University to work for his father’s coat-manufacturing business. In 1939, he transformed it into a women’s dress company, Kay Windsor, and continued to grow the business and guide its success until selling it to Vanity Fair in 1971.

“He became known as ‘the Cotton King’ for bringing inexpensive cotton dresses into every woman’s closet,” loved ones wrote in Mr. Shapiro’s obituary. “With his captivating sense of humor and the capacity to approach life with a ‘glass-half-full’ philosophy, he met life’s challenges with determination, optimism and infinite hard work.”

Through the Shapiro Family Foundation, Mr. and Mrs. Shapiro supported numerous nonprofits in Boston and beyond. In the past decade, the foundation has awarded approximately $6.4 million in grants to more than 80 community-based organizations in such areas as disability inclusion, youth arts and youth empowerment.

“[Mr. Shapiro] enjoyed teaching his daughters his values and emphasized the importance of helping others,” his obituary stated. “What he had earned in business, he believed, should be shared to help those in need.”

Loved ones described Mr. Shapiro as a “hands-on partner” with the organizations he supported.

“Carl was known for poring over architectural plans, participating in many ‘hard hat’ visits, consulting with the groups who would occupy a building and making innumerable suggestions to improve the project,” his obituary stated. “He would say that no detail is insignificant, from the size of the patient rooms to the art on the walls, which he believed strongly was good for patient morale.”