Medical students in the RISE program and Brigham radiation oncologists participate in a virtual discussion on underrepresented minorities in medicine.

For centuries, medical students have learned how to care for patients partly by observing physicians practice medicine in real time. Yet the COVID-19 pandemic has pushed health care into uncharted territory, forcing medical education programs to discontinue in-person rotations and no longer host visiting students.

Although this action has been vital to limiting the spread of COVID-19 and keeping the Brigham community safe, Brigham Radiation Oncology residents Idalid Franco, MD, and Oluwadamilola Oladeru, MD, became concerned it could have an unintended consequence by disproportionately affecting students who are from racial and ethnic populations that are underrepresented in medicine, relative to their numbers in the general population.

Typically, medical students can participate in “away rotations” — short-term learning opportunities at an outside institution — to gain experience in specialties not offered at their medical school. When the pandemic halted all travel, these opportunities vanished. For more competitive areas of medicine like radiation oncology, the repercussions were especially devastating.

“Our concern was that more than half of underrepresented minorities studying medicine don’t have an associated radiation oncology program at their medical schools,” said Franco. “If they weren’t able to travel and visit other hospitals or schools to learn, that was going to impact them and their ability to be competitive in this specialty.”

Currently, physicians who are underrepresented in medicine account for 7 percent of practicing radiation oncologists nationwide, according to the National Library of Medicine.

With the support of department leadership, Franco and Oladeru launched the Radiation Oncology Intensive Shadowing Experience (RISE) this fall to expand opportunities for underrepresented students in medicine during the height of the COVID-19 pandemic.

RISE is a week-long virtual program designed to introduce third- and fourth-year medical students to radiation oncology. During the week, students consult with an attending mentor over Zoom on a specific disease site, such as lung or breast cancer. Students also meet with a resident to prepare for a final presentation on what they have learned, which they deliver virtually to faculty at the end of the program.

“RISE embodies the Brigham’s commitment to not only discuss systemic inequities and social injustice but also to take action to address them,” said Daphne Haas-Kogan, MD, chair of Radiation Oncology. “Drs. Franco and Oladeru recognized a problem, devised a solution, gathered a team, inspired our department and executed their plan. The gratitude we feel for Dr. Franco and Dr. Oladeru’s thoughtful and brilliant execution of the program is immeasurable.”

‘A Tool to Broaden Opportunities’

The program is free and open to medical students from around the U.S. and Canada who identify as African American/Black, Latinx, Native American, Pacific Islander and/or Puerto Rican and have an interest in radiation oncology. To date, 14 students have completed the program. 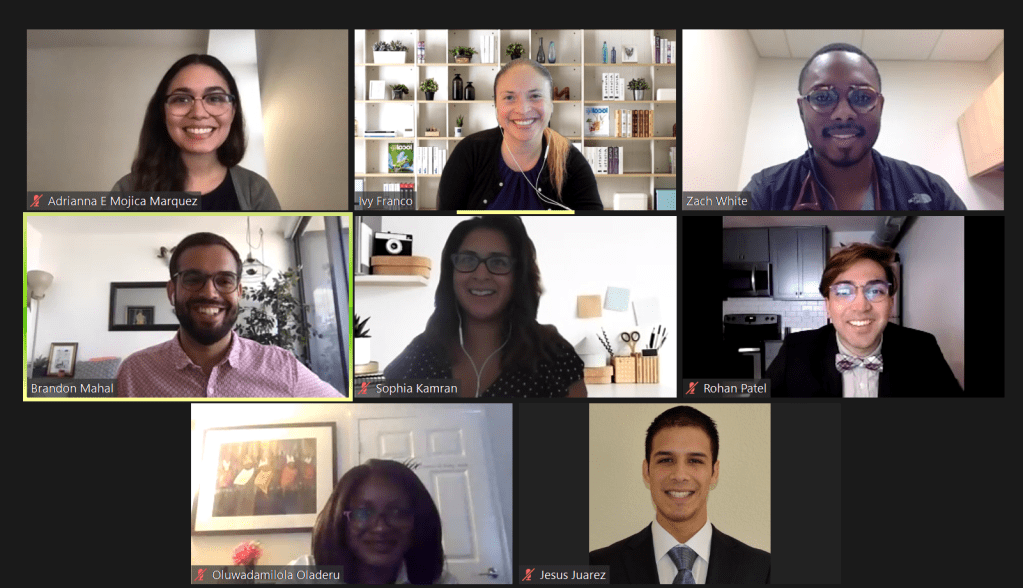 Among its first graduates is Adrianna E. Mojica-Márquez, a fourth-year medical student at the Universidad Central del Caribe SOM in Bayamón, Puerto Rico, who participated in RISE in early August.

“Being a Puerto Rican female student-doctor, I have encountered multiple hurdles during my training years. It is a field underrepresented by Latinos and women nationwide, and that’s why I considered the program to be special,” she said. “The RISE program presented itself as a tool to broaden the opportunities and knowledge from the radiation oncology specialty while being surrounded by underrepresented professionals that have been at the vanguard of the field.”

For students who attend a medical school that does not have a radiation oncology program, an in-person term or away rotation historically has been the only way to document interest in the field before applying to residency, said Oladeru. When COVID-19’s travel restrictions made these rotations essentially nonexistent, it put these students at a significant disadvantage for the next stage of their training.

“Normally, it’s sort of a checklist of things where you rotate at different places and get letters from different people. That’s sort of how the game is played,” Oladeru continued. “And so when things became all virtual, it looked like it could be easier for trainees, but there were still gaps.”

Although RISE is the first virtual shadowing program for underrepresented students in medicine at the Brigham, Franco said they’re looking to expand into other specialties soon. “It’s very transferable,” she said.

RISE recently received a Luther Brady Educational Grant from the American College of Radiation Oncology (ACRO) to assess the program’s outcomes and impact on trainees. Each year, this grant is provided to small educational projects that can be particularly hard to fund through standard research mechanisms. RISE was one of four projects to receive funding this year.

To learn more about the RISE program, visit bit.ly/HROP_RISE. For questions or assistance, contact RO_RISE@mgh.harvard.edu.