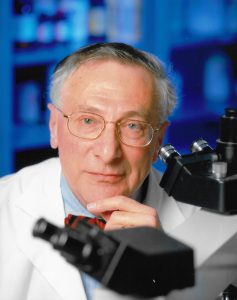 The Brigham community and Department of Pathology mourn the loss of Noel Rose, MD, who passed away July 30. He was 92.

Over a career spanning seven decades, Dr. Rose made seminal contributions to the field of immunology and the understanding of autoimmune diseases. But what stands out to many of Dr. Rose’s colleagues and students are the small but deeply meaningful contributions he continued to make throughout his lifetime.

Dr. Rose joined the Brigham five years ago after retiring from Johns Hopkins School of Medicine. He was a familiar face at colloquia, conferences, grand rounds and group meetings and co-taught a class in clinical immunology each spring at Harvard Medical School. He treasured the opportunity to work with students and to consult with colleagues, and is remembered for his intellect and insightful advice, which enriched and inspired both those with well established careers and the next generation of scientists and physicians.

“Noel was often referred to as the father of autoimmunity,” said Jeff Golden, MD, chair of Pathology at the Brigham. “His seminal work essentially created a whole new field, or at least chapter, of medicine.”

Dr. Rose’s discoveries helped to overturn a central dogma in the field of immunology known as horror autotoxicus — the theory that the immune system cannot create antibodies that can injure one’s own cells. In the lab of Ernest Witebsky, MD, at University of Buffalo, Dr. Rose performed a series of experiments in the 1950s that provided compelling evidence that auto-antibodies could attack the body. Hard work, determination and peer-reviewed publications would change the prevailing thinking in the field, and lead to a new term for a category of conditions caused by auto-antibodies: autoimmune diseases. Today, autoimmune diseases are known to include type 1 diabetes, multiple sclerosis, lupus, rheumatoid arthritis, myocarditis (a disease that became a focus of Dr. Rose’s later research) and more than 100 other chronic conditions that affect more than 20 million Americans.

“In his early years in research, Noel showed unwavering determination and focus, attitudes that characterized his glorious 70 years at the forefront of the study of autoimmune diseases,” his colleague George C. Tsokos, MD, chief of the Division of Rheumatology and Clinical Immunology at Beth Israel Deaconess Medical Center, recently wrote. Tsokos is the current editor of the journal Clinical Immunology, a role he inherited from Dr. Rose. “His approach to science has been characterized by sharp focus, relentless persistence, innovation and disdain for ‘spinning’ data.”

Dr. Rose joined the faculty at Johns Hopkins in 1982 as chair of what is now the W. Harry Feinstone Department of Molecular Microbiology and Immunology at the Bloomberg School. He directed the PhD program in pathobiology there for many years and was adored by students, repeatedly winning his awards for his mentorship.

Kathleen Burns, MD, PhD, who now serves as the chair of Pathology at Dana-Farber Cancer Institute, knew Dr. Rose at Johns Hopkins, where she was a resident, fellow and faculty member. Even after retiring from Johns Hopkins and moving to the Brigham, Dr. Rose continued to provide Burns with invaluable perspectives and advice.

“I can remember no casual conversation with Noel,” said Burns. “Whenever we crossed paths, he would ask about what was important in my work and my life. Even his question would linger on my mind and call me to do something more significant with the day.”

Dr. Rose fondly called his position as part-time senior lecturer in the Department of Pathology at the Brigham his “retirement job” — one that allowed him to continue doing what he loved. Dr. Rose made the deliberate decision not to start another lab after leaving Johns Hopkins, in large part because he didn’t want to compete against or take resources away from early-career investigators. Instead, he continued to consult and teach and remained a vibrant part of the scientific community.

“Clearly, Noel never considered retirement as an option,” said Andrew H. Lichtman, MD, PhD, a professor of Pathology at the Brigham. “It was a great privilege for us to benefit from his intellect and knowledge, and that gift will endure.”