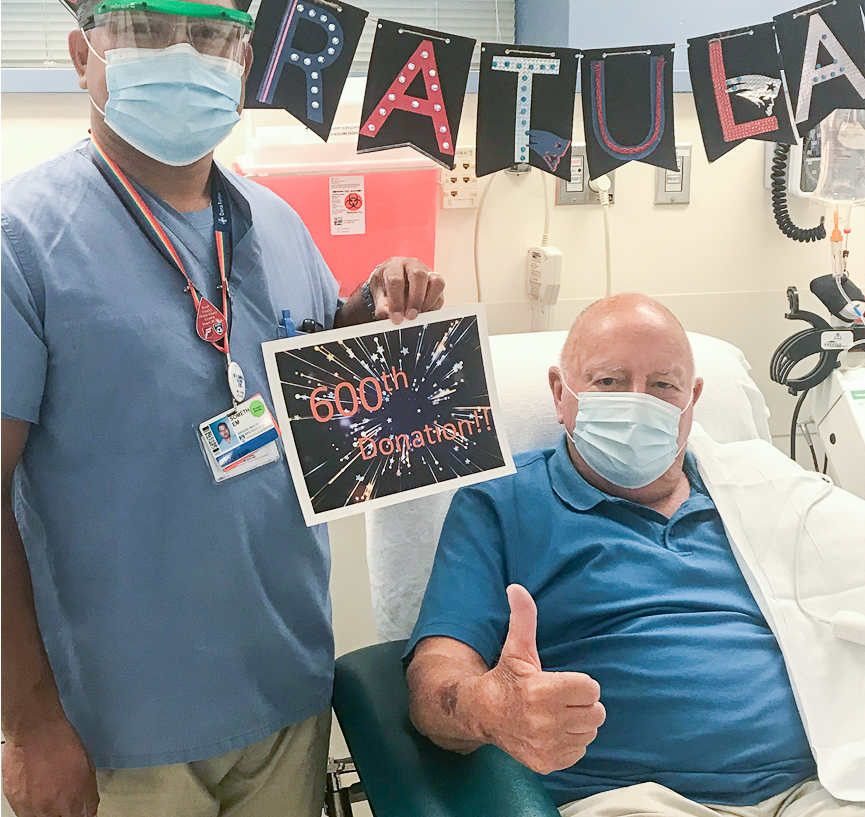 From left: Someth Em, lead technician at the Kraft Center, celebrates with Bob Belluche, who recently made his 600th platelet donation.

For Bob Belluche, 82, making regular platelet donations at the Kraft Family Blood Donor Center has come down to simple arithmetic.

All those one-plus-ones have really added up since the Tewksbury grandfather first started donating in October 1994. Last week, on Aug. 4, he made his 600th platelet donation at the Kraft Center — amounting to more than 75 gallons of blood product.

Platelets act as the body’s bandages, allowing blood to clot and wounds to heal. Cancer patients and other critically ill patients often require transfusions of healthy platelets because their blood does not clot properly. Platelets have a shelf life of just five days, which is why the need for donors is so great. Volunteer donors help ensure there is a sufficient supply for patients in need.

“We are very fortunate to have such dedicated donors like Bob at the Kraft Center. To hit the 600-donation milestone, he had to come in at least 20 weeks a year to donate for the past 26 years,” said Molly McDermott, recruitment program manager at the Kraft Center, which serves both the Brigham and Dana-Farber Cancer Institute. “To make that kind of commitment for a person you will never meet is truly heroic.”

Belluche was first inspired to donate after he learned of a friend’s daughter who needed platelet transfusions. Seeking to better understand what being a platelet donor involved, he reached out to the Blood Donor Program to learn more and soon scheduled his first appointment. He has made it a Saturday morning routine since then — sometimes driving over three hours from Maine, where he lives for part of the year.

“I had no aspiration of doing 600 donations,” said Belluche, who has since inspired his 17-year-old grandson, Liam, to begin donating as well. “I just got in the habit of it, and, all of a sudden, here we are.”

Belluche explained that growing up in a low-income neighborhood in North Providence gave him an appreciation for the value of life’s most priceless gifts.

“When I learned platelets have a shelf life of four or five days, I thought, why throw something away that’s lifesaving?” he said. “It’s a value beyond money. It’s the value of life.”

Most adults can safely donate platelets 24 times over a 365-day period, with at least seven days between each donation. As he’s gotten older, Belluche says that he’s needed to space out his donations more to give his body extra time to recover, but otherwise he plans to continue donating for as long as he can.

“I want to light one candle in the darkness,” he said. “So, I keep giving.”

To schedule an appointment at the Kraft Family Blood Donor Center (open seven days a week), email BloodDonor@partners.org or call 617-632-3206.

One Response to “After 600 Platelet Donations, ‘One Plus One’ Equals a Lifesaving Sum”