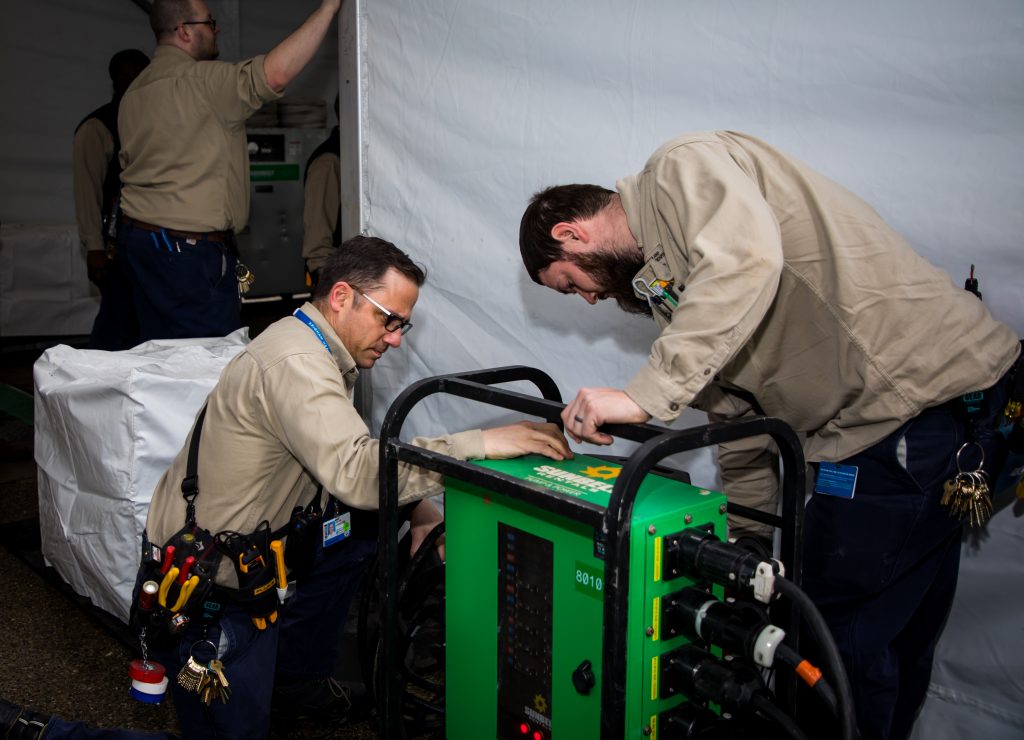 Outdoor testing tents constructed in a matter of hours. The disappearance of self-service salad bars and coffee stations. Floor decals marking precisely where a limited number of elevator occupants were permitted to stand.

These are just a few examples of the many ways that the pandemic radically transformed not only how the Brigham operated day to day but also the very appearance of the hospital and distributed campus.

As it became increasingly apparent how quickly COVID-19 was spreading, the Brigham’s facilities and spaces needed to adapt to support physical distancing and reduce the risk of transmission. Practices that were once so ordinary and unquestioned in a hospital environment — such as staff cramming into crowded elevators or sick patients sitting in a common waiting room — suddenly became unthinkable.

From inpatient units to public areas, and practically everywhere in between, several teams at the Brigham rapidly responded to these needs and implemented a variety of changes to maximize safety and address the complexities of the pandemic.

Adapting on the Fly

“There were a lot of activities that were very visible, but there was also so much happening behind the scenes that few people saw,” said George Player, CPE, FMA, vice president of Facilities and Operations. 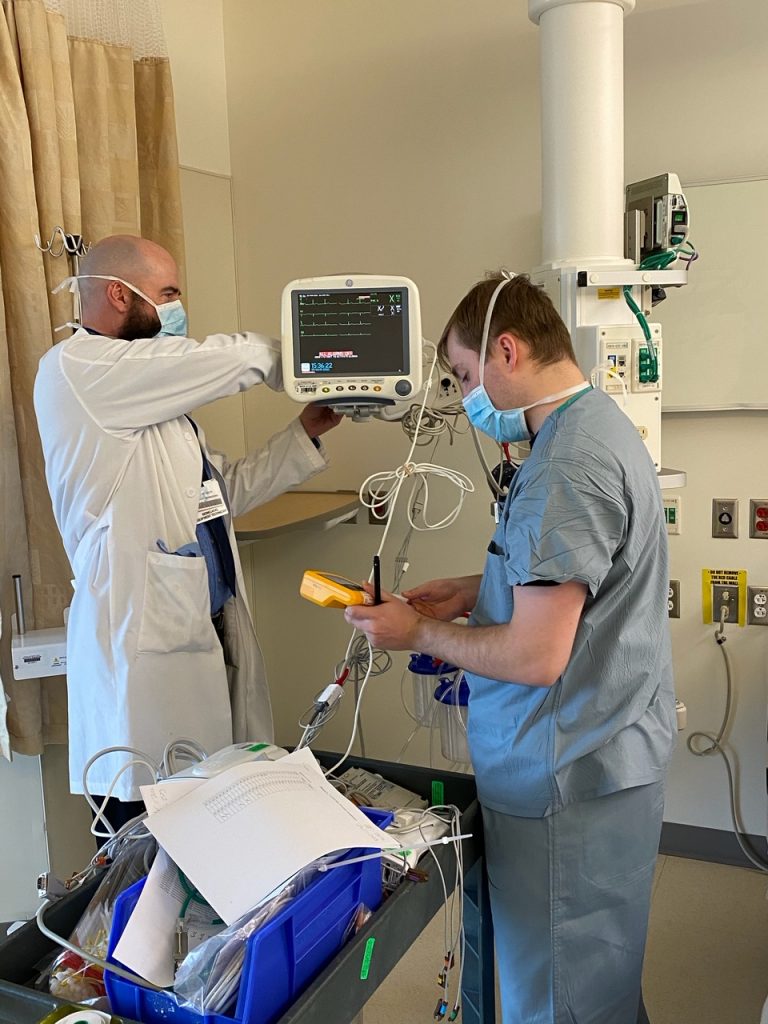 From left: William Smith and Kevin McPeek of Biomedical Engineering perform safety and function checks on patient care monitors in a Shapiro unit being converted to an SPU.

One of the largest-scale physical transformations the hospital underwent was a multidisciplinary effort to convert Shapiro 6–10, Braunwald Tower 3BC and 16CD, and Connors Center 7 into Special Pathogen Units (SPUs) dedicated to the care of COVID-19 patients.

Given the urgency of the crisis, launch teams often had a day or less to ready the units.

Biomedical Engineering, Central Transport and Equipment Services, Nursing and many others worked together to ensure units had the appropriate clinical equipment to care for COVID-19 patients.

In total, the Biomed team transported, installed, configured and tested approximately 450 clinical devices, including patient monitoring equipment, in SPUs across three buildings. The team also facilitated training and provided technical support for unit staff, many of whom had been temporarily reassigned to SPUs from other units and were getting acclimated to unfamiliar environments, said Elizabeth Brosseau, MBA, MSIT, BSN, RN, CBET, senior clinical engineer and team leader in Biomed.

“In some cases, we had nurses who were accustomed to using a different type of patient monitoring in their regular units, so we were able to help them get comfortable with this equipment,” Brosseau said.

“When we built Shapiro about 15 years ago, it was on the heels of the SARS epidemic. During the design phase, we worked closely with Infection Control to discuss what we would need if a pandemic occurred, so we built into the control sequence the ability to make all the rooms negative pressure,” Player said. “It was one of those things you hope you never need to use, but it was so valuable because we could reprogram a large number of rooms in a short amount of time.”

To support other areas of patient care, Engineering staff also built temporary tents used for triage and testing in front of the Emergency Department and on Shattuck Street, in addition to erecting larger temporary structures for drive-thru testing at ambulatory sites in Chestnut Hill and Pembroke. The team also constructed physical barriers in waiting rooms and other patient areas to protect staff who might interact with undiagnosed COVID-positive patients. 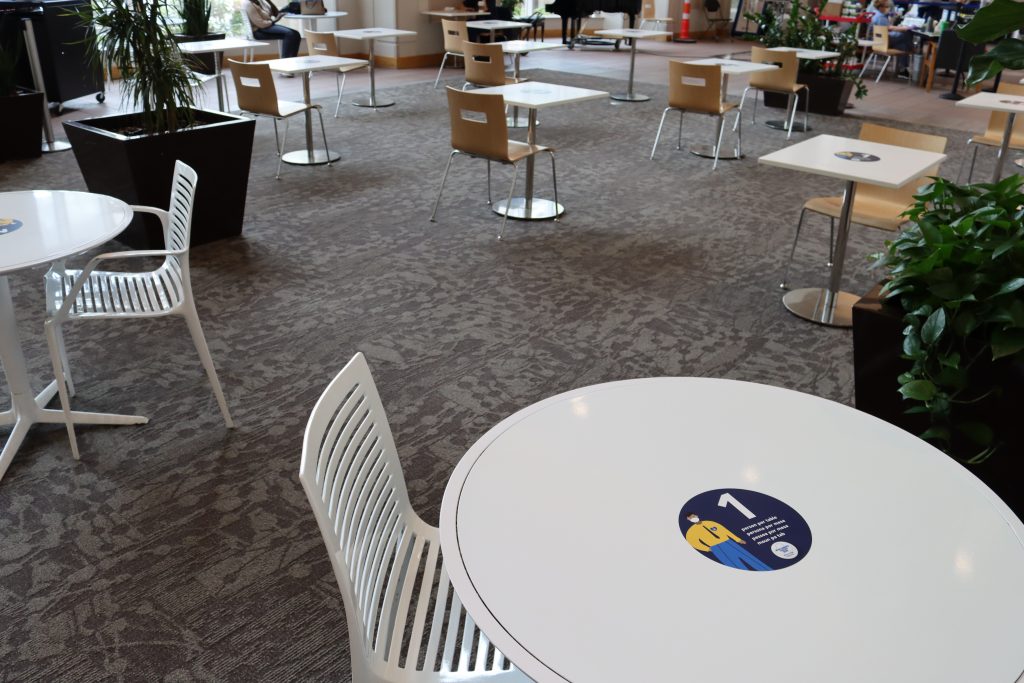 Seating in the 45 Francis St. lobby is reconfigured to promote physical distancing.

Food Services made multiple changes to its kitchens and dining venues, including the elimination of self-service options in the Garden Café and Coffee Connection at 45 Francis St. to comply with the latest infection control guidelines.

Where customers had once shared a single pair of tongs to retrieve pastries or used communal carafes of milk at coffee stations, Food Services staff quickly pivoted to replace such setups either with individually wrapped items or a different process.

The act of sharing a meal in close proximity to others emerged as an activity with heightened risk of transmission. As a result, Food Services staff also rearranged tables and chairs in dining areas — in many cases limiting table occupancy to one person — to support physical distancing.

In the Shapiro building, Engineering staff also reprogrammed escalators to only travel up in the morning to move staff through employee entrances quickly while allowing for better physical distancing.

“We continually made rapid changes,” Player said. “Everybody stepped up, helped where they were needed and never said no. It was always, ‘What can we do?’ It was an unbelievable demonstration of teamwork, and I am so proud how hard and tirelessly everyone worked.”