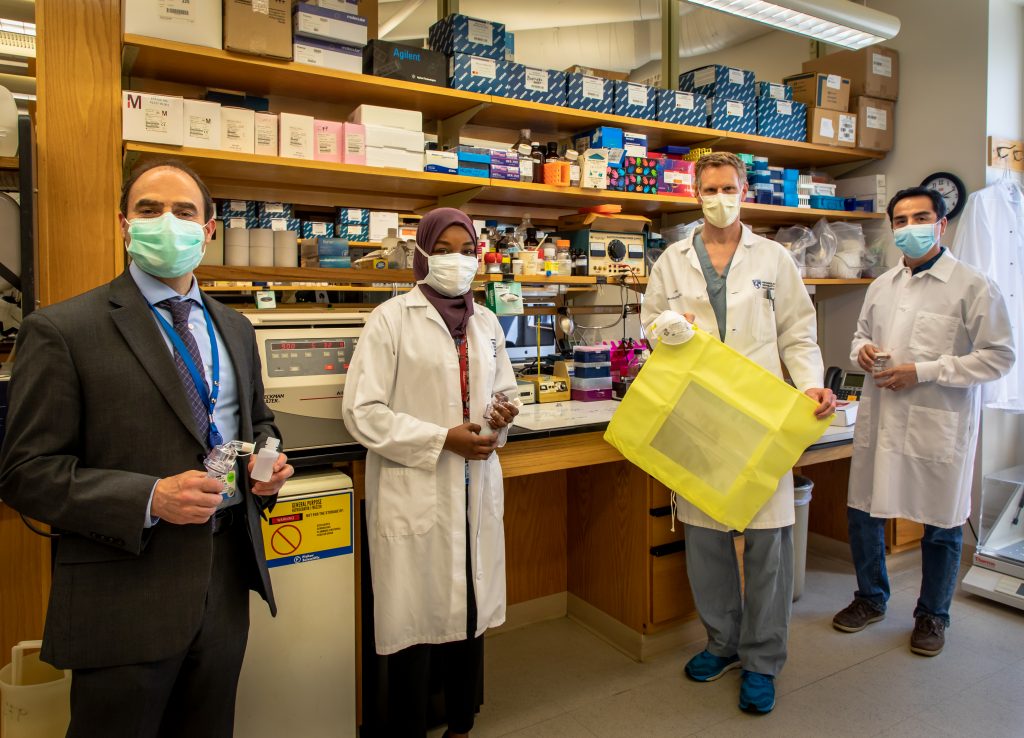 While the dire scarcity of N95 respirators occupied most of the world’s attention during the early days of the COVID-19 pandemic, a related but lesser-known shortage of fit-testing solution — a substance used to evaluate how well an N95 fits someone’s face — had also begun to worry a group of operational leaders at the Brigham.

When an N95 respirator doesn’t fit properly, tiny gaps between the mask and wearer’s face that might be invisible to the naked eye can allow hazardous substances in the air, such as respiratory droplets from a sick person, to sneak into the wearer’s nose or mouth.

Ensuring that an individual is properly fitted to a mask that tightly seals to their face isn’t something that even a highly trained professional can simply eyeball. It requires wearers to undergo a 10- to 15-minute fit-testing process performed by a trained technician.

During a fit test, the wearer dons an N95 respirator as they normally would, and then after a preliminary taste sensitivity test, a hood is placed over their head. Next, a sweet- or bitter-tasting solution is sprayed repeatedly into the hood while the wearer performs a variety of actions, such as turning their head, bending over and speaking. If they can taste the solution through the N95 at any time, it means the seal between the respirator and the face isn’t snug enough and another size or brand should be tested.

On average, each fit test consumes about 0.1 to 0.2 fluid ounces of solution. Although that sounds like a small amount, it adds up rapidly during a crisis when thousands of staff suddenly need to be fit tested — as hospitals around the world, including the Brigham, learned during the pandemic.

Over a four-week period in April, 80 newly trained Brigham fit-testers performed 5,500 fit tests, consuming over 20 gallons of solution. (Since up to five different N95s were tested on each person before finding the proper fit, the total number of individual tests performed over this period is closer to 20,000.)

By comparison, the Brigham typically uses less than five gallons of fit-testing solution in a normal year.

When the crush of global demand for fit-testing solution overwhelmed commercial suppliers, leading to worldwide shortages, an unlikely set of collaborators at the Brigham came together to find a solution, in a manner of speaking.

Jon Boyer, ScD, CIH, director of Environmental Affairs, said it became clear early in the crisis that the Brigham and other institutions across the system would need a contingency plan for ensuring a sufficient supply of fit-testing solution. 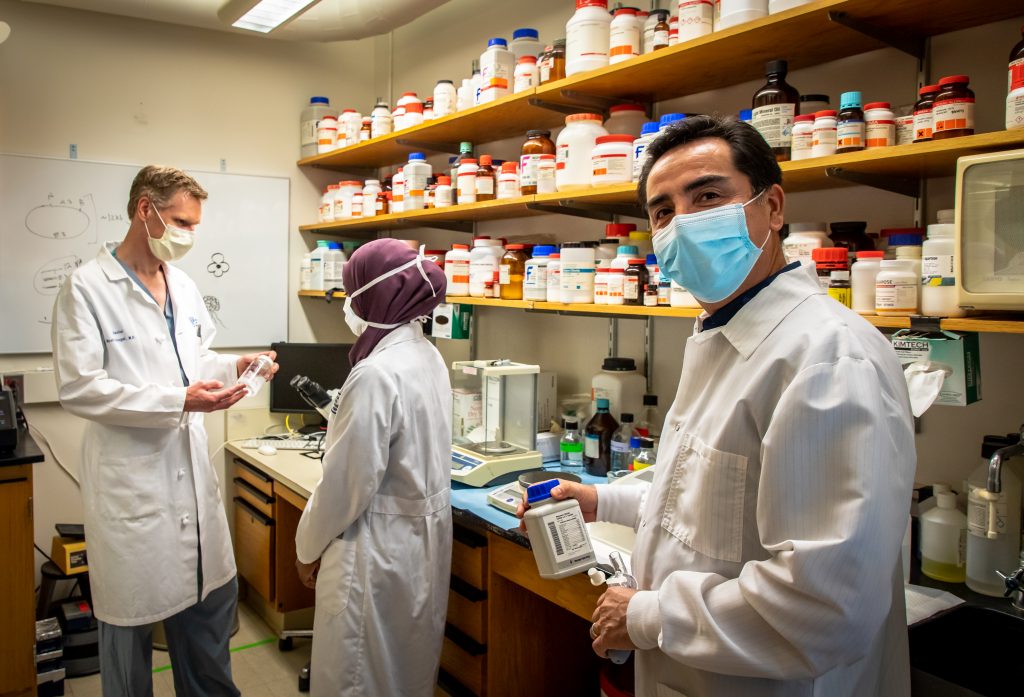 Claudio Perez (foreground) shows some of the supplies used to make the solution, while Danny Muehlschlegel and Reem Abbaker (background) chat in the lab.

“When the Mass General Brigham system recognized that N95 respirators and fit-testing solutions were going to be supply issues, multiple collaborative discussions were springing up between operational leaders like myself and researchers looking for ways to help,” said Boyer.

The need became even greater when the Brigham received shipments of N95s from a different manufacturer than the hospital normally used. While these new respirators offered much-needed relief from one supply shortage, it compounded the other; staff had to undergo fit testing all over again, further draining supplies of fit-testing solution.

Upon discovering some online resources for making fit-testing solution from scratch, Boyer was connected with J. Danny Muehlschlegel, MD, MMSc, FAHA, vice chair of Research in the Department of Anesthesiology, Perioperative and Pain Medicine. Although the two had never previously worked together — and their professional lives may not have otherwise crossed — their teamwork brought the idea to life.

Even though the commercial product was sold out everywhere, Muehlschlegel found that he could easily order the reagents, or ingredients, for producing fit-testing solution in the lab. Drawing from scientific literature and guidelines from the U.S. Occupational Safety and Health Administration, Muehlschlegel and Reem Abbaker, a research assistant in the department, got to work.

But as they ran into issues during their initial trials, Muehlschlegel, a clinical translational researcher by training, soon realized he would need help from a colleague with greater expertise in basic research. He tapped Claudio Perez, PhD, lead investigator in the department’s Laboratory of Molecular Anesthesia and Muscle Physiology, who experimented with a few formulas before finding the perfect one.

Through this ongoing collaboration, the team has been able to produce gallons of fit-testing solution on demand, ensuring a stable source for this essential supply.

“Situations like this make you realize everybody is an extremely important cog in this gigantic wheel,” Muehlschlegel said. “Having a low supply of fit-testing solution might seem like a mundane detail, but that’s enough to stop the entire operation in its tracks. We could have all the N95 masks in the world, but they would do us no good if we couldn’t properly fit-test them. This reinforced for me how important every single person is in this institution.”