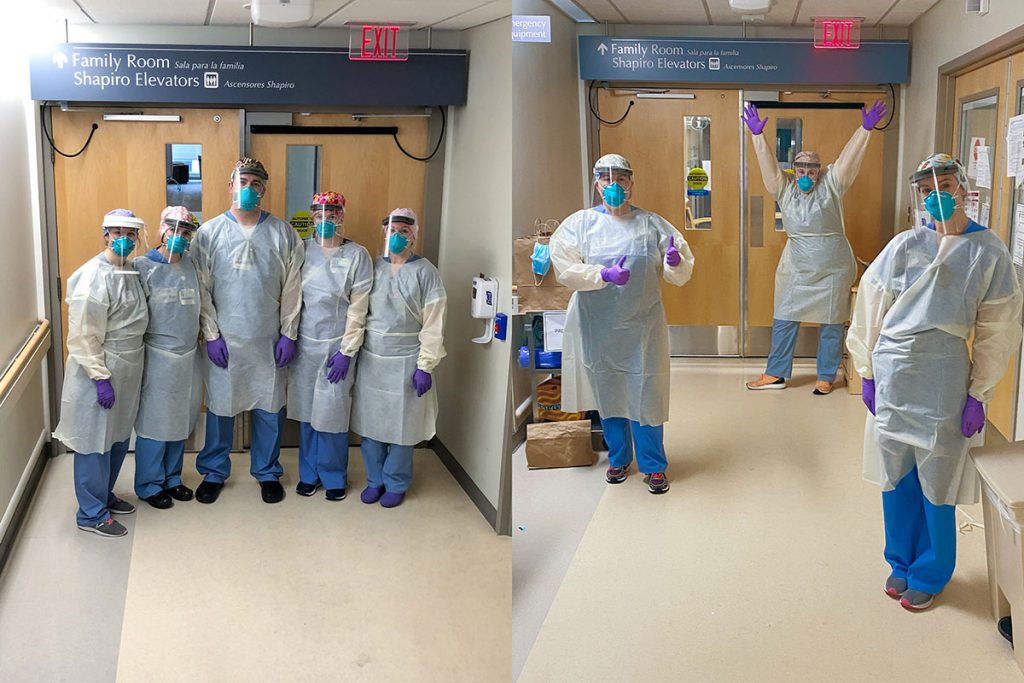 One of the most striking features of COVID-19 has been the rapid, merciless way the disease attacks the lungs of patients with severe symptoms. For the sickest patients, it can mean going on a mechanical ventilator because they can no longer get enough oxygen by breathing on their own.

Although ventilators — which deliver air into the lungs through a tube placed down the windpipe — are a crucial and lifesaving tool for patients with respiratory failure, they are not without risks. What’s more, and for reasons still not understood, some COVID-19 patients’ lungs continue to worsen even when aided by a ventilator, which normally allows the lungs to rest and heal.

Despite having such complex challenges, many intensive care COVID-19 patients with respiratory failure have benefited from a seemingly simple solution: being repositioned from lying on their back to lying on their belly. This technique, known as proning or prone positioning, allows them to breathe better.

But while it sounds straightforward, there’s nothing easy about doing this for a critically ill patient on a ventilator. It can require four to six clinicians to safely prone an intensive care patient, and the process can take 30 to 45 minutes to complete.

As the number of COVID-19 patients on ventilators at the Brigham began to climb in March and April, it became apparent that unit staff alone would have difficulty keeping up with proning so many, said respiratory therapist Andrew Sullivan, RRT.

“The respiratory care department’s volume went from an average of 35 ventilators per day to a peak of 115, and most COVID-19 patients require prone positioning,” Sullivan said. “This put an enormous strain on respiratory therapists, who were already stretched thin and caring for three to four times more patients than usual.”

To help support their ICU colleagues in this work, Rehabilitation Services leaders and staff spearheaded the creation of two multidisciplinary Prone Teams to provide 24/7 support for Special Pathogens Units (SPUs), which is where hospitalized COVID-19 patients receive care. The teams, which launched in April, consist of physical therapists, occupational therapists and orthopaedic technicians, who work in collaboration with respiratory therapists and nurses on the units.

“We knew that our nursing and respiratory therapy colleagues in the SPUs had been overwhelmingly busy caring for our patients,” said Jillian Ng, PT, DPT, inpatient physical therapy clinical supervisor in Rehab Services and a member of the day shift Prone Team. “Having our rehab therapists available 24/7 to help prone patients has relieved some of the extra burden on ICU staff. We also bring experience with mobilizing patients in ICUs and knowledge about positioning and pressure ulcer prevention that is particularly helpful when proning a patient.”

Isabelle Shaw, MSN, RN, a nurse on Shapiro 9 West, said the additional support the Prone Teams provide has been invaluable to front-line staff.

“The implementation of the Prone Teams has been one of the biggest COVID ICU workflow improvements,” Shaw said. “Prior to their existence, it was very difficult to coordinate proning, as it required four nurses to assist. Now, it occurs seamlessly.”

One Team, One Goal

For decades, evidence has shown that many patients with respiratory failure can breathe more easily when placed in a prone position. This is partly due to gravity, as the heart and diaphragm press down on the lungs when someone is lying on their back. But proning has also been shown to improve the way that alveoli, which are tiny air sacs in the lungs, inflate and manage the flow of oxygen into the bloodstream.

“Patients oxygenate and ventilate better in the prone position, and sometimes we see this immediately,” Ng said.

As a respiratory therapist, Sullivan said the Prone Teams’ efforts have helped both patients and staff immeasurably.

The flexibility, enthusiasm and resilience of her Rehab Services colleagues on the Prone Teams have been extraordinary to witness, Ng said.

“This is a new role for us. Most of us had never proned a patient before, and none of us had ever worked an overnight shift before,” she said. “I am most proud of how a group of rehab therapists, nurses and respiratory therapists — often strangers — work together, support and encourage each other as a team for one goal: to help our patients oxygenate and ventilate better for their recovery.”