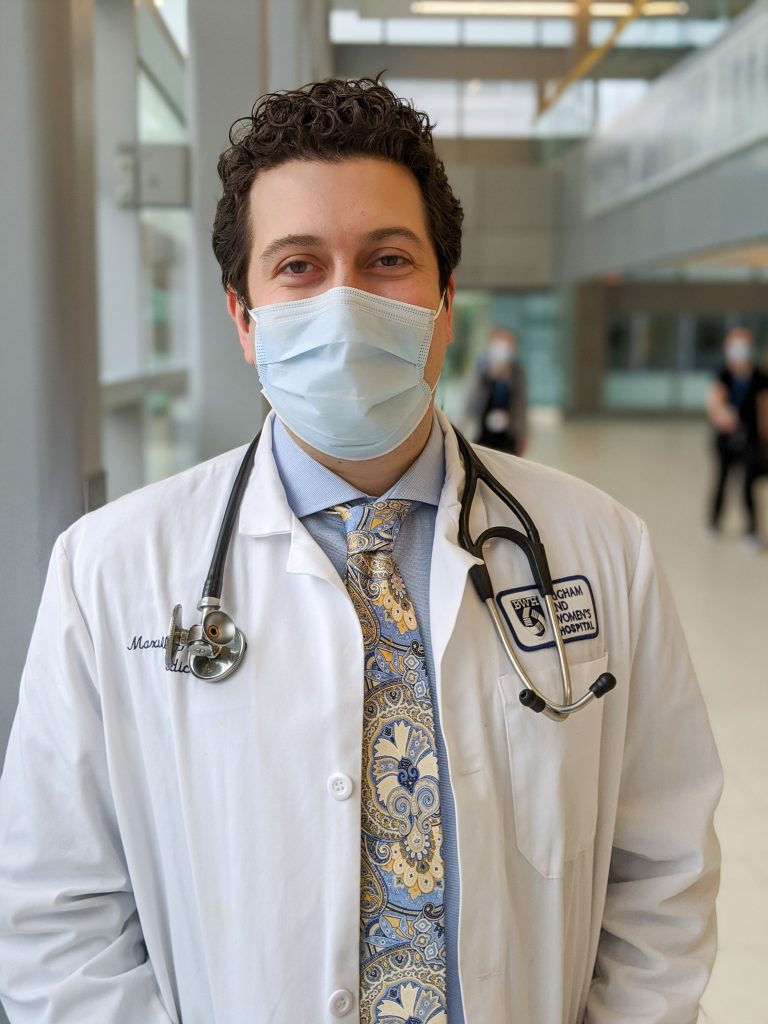 During a recent night shift on one of the Special Pathogens Units (SPUs), where patients with COVID-19 receive care at the Brigham, Internal Medicine resident Maxwell Coll, MD, took advantage of a quiet moment to call a family member of one of his patients.

Coll was concerned. He sensed the patient — who had been hospitalized for several weeks and hadn’t seen family since coming to the hospital due to policies prohibiting most visitors during the pandemic — was feeling lonely and isolated.

Unlike other patients who had been regularly communicating with loved ones through video apps like FaceTime, this patient didn’t have a smartphone. But Coll and his colleagues had an idea to help the patient’s family access Zoom, a web-based video conferencing application, on their home computer. Then, using an iPad mounted next to the patient’s hospital bed — a system primarily used for care providers and patients to interact — the care team initiated a private Zoom meeting between the patient and their loved one.

It wasn’t just his compassion as a doctor that inspired Coll to find a solution for his patient. As someone who had just recovered from COVID-19 himself after isolating at home, Coll understood on a personal level what his patient was experiencing.

“It’s hard to convey the isolation and loneliness that you feel as a patient with COVID,” Coll said. “I was unable to see my wife in person for three weeks, but we could visit virtually. Many of our patients may not have iPhones or Zoom accounts, so it’s not as easy to create connections with technology as you might think.”

While Coll never reached the point of requiring hospitalization, about two weeks into his illness he experienced such severe shortness of breath and chest discomfort that he and his wife rushed to the Brigham’s Emergency Department. As they sat in their car, not knowing whether Coll would come home in a few hours or several weeks, the fear and uncertainty were overwhelming for them both, he recalled.

“My wife desperately wanted to come in with me, but because of the visitor restrictions she wasn’t allowed,” Coll said. “When I was inside, she was crying on the phone, begging me not to die. I’ve never heard her so scared. It has since driven home for me how hard this disease is, not just for our patients but for their families as well.”

In addition to bringing back this deeper sense of empathy, Coll said another feeling stirred in him: an eagerness to get back to comforting, healing and caring for patients alongside his Brigham family.

“There is no place I would rather be than beside my colleagues, doing what matters most — taking care of people,” said Coll, who snapped a celebratory selfie on Francis Street to commemorate his first day back on April 22. “I did not expect to be dealing with a pandemic during my first year of residency, much less to become a patient in it, but we are here — and we march on together.”

Related story:  Next Generation: I Was a Doctor With COVID-19 — And I Will Not Be the Last